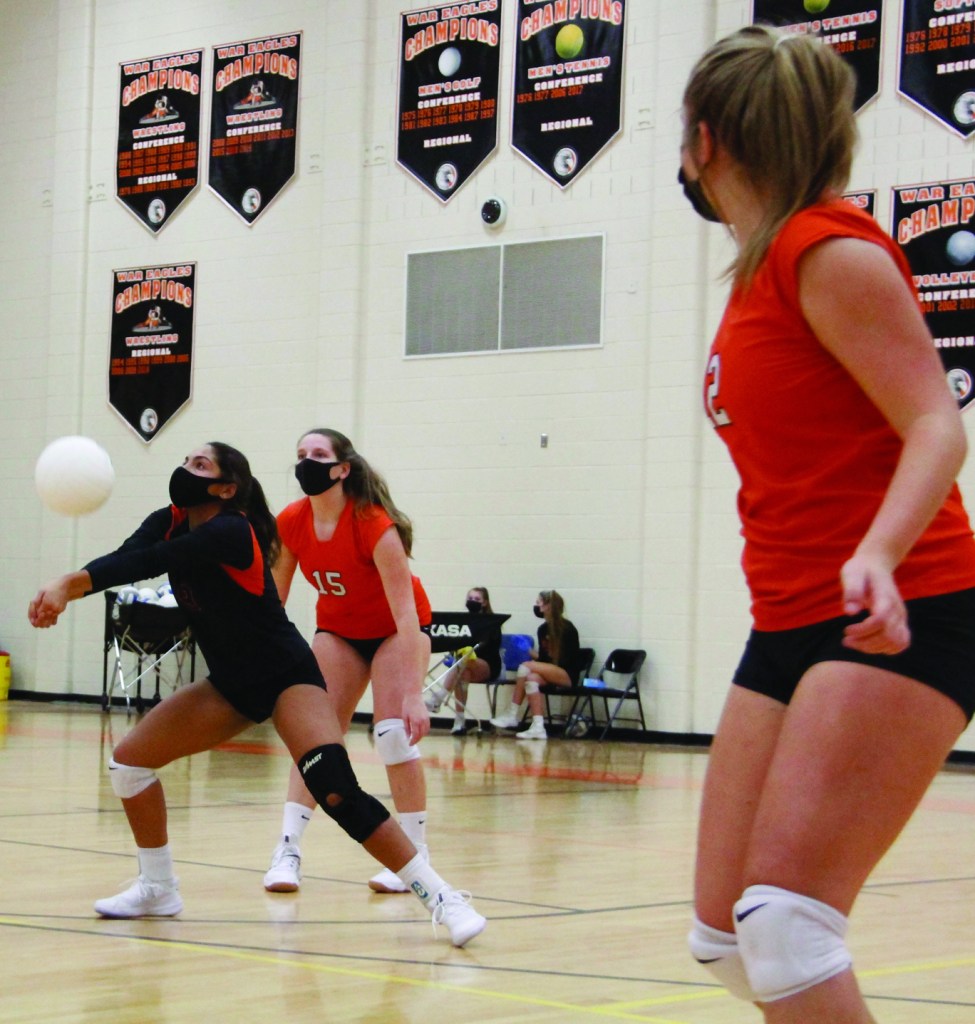 Freshman Hailey Johnson is the libero.

Davie’s JV volleyball team has made a 3-0 start look easy when it shouldn’t have been easy. Lots of things could have gone wrong when 83 percent of your roster is freshmen, when you’ve endured injuries, when you’ve had players quarantined.

Here’s something scary for opponents to ponder: Amber Brandon considers her JV team a work in progress and yet it’s performed like a wrecking machine.

“The JV has been impacted by the COVID,” said Brandon, the varsity coach who has doubled up as JV coach with Brittani Steger unable to coach in the early going. “We had a kid quarantined. She came back and we have another kid quarantined. We’ve got an injury. The kids keep on showing up no matter who’s in the gym, no matter who’s coaching them. They keep working hard and keep doing the things you ask them to do.”

And then: “This freshmen class reminds me a lot of our junior class. They have a lot of really good pieces.”

The War Eagles smothered Glenn 2-0 in Kernersville on Nov. 23. Freshmen Lauren O’Connor and Reily York were big reasons for that.

“Lauren had a really good game,” Brandon said. “She’s a trained setter with great hands. She’s working on understanding the flow of the game. Because of the quarantine situation and injuries, she’s having to stay in and hit. She’s being super smart and being a leader on the floor, knowing when to be aggressive and knowing when to put the ball in play. She has a great serve. She’s just a good all-around player.

“Reily stepped in tonight into a pretty big role and did a great job. She is one of the most positive kids we have in the gym. She’s always cheering for her teammates. It’s super exciting to be able to see one of those kids step into a big role and have a good night.”

One day later, the War Eagles hosted East Forsyth and rang up their third win in two sets. All three victories have come in the Central Piedmont Conference.

“The JV played really, really well,” Brandon said. “The first set was the best that I’ve seen them. They’re starting to finally get all their pieces back. Tonight was the closest to a full roster that they’ve played with so far.”

“I can’t speak highly enough of Hailey,” she said. “I think she’s going to be the next great libero.”

“Gracie had a couple huge blocks at pivotal times in the match,” she said. “She’s been working to adapt to the freshmen setters, and that’s a hard adjustment to make in the middle. Gracie took some positive steps in the right direction to making the setter/hitter adjustment.

“Caroline had a really good match. She’s a kid we’re asking a lot out of right now. She plays six rotations and she’s got a huge responsibility in serve-receive.”