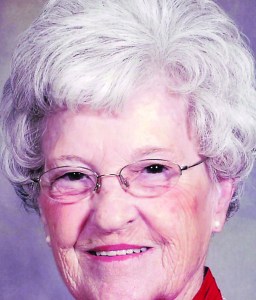 She was born May 1, 1925, in Davie County to the late John Anderson and Hailey C. Myers Whitlock. Mrs. Davis was a member of First United Methodist Church for 73 years and was a member of the Mary Circle and the Fellowship Sunday school class. She was a graduate of Cooleemee High School, Class of 1944, and attended nursing school.  Mrs. Davis was a registered nurse and started her career at Autumn Care of Mocksville and retired from the office of Dr. Earl Welch Jr. in Winston-Salem. She was a member of the Clemmons Chapter 373 Order of the Eastern Star.  Mrs. Davis enjoyed playing golf, and had a stroke of luck, once, she hit a hole in one. She especially loved working in her flowers, but especially loved being a Nana to her grandchildren and great-grandchildren.

A graveside service will be conducted at 2 p.m., Thursday, Nov. 19 at Rose Cemetery with Dr. Glenn L. Myers Jr. officiating. Be mindful of social distancing and wear a face covering. The family invites friends to come by Lambert Funeral Home, Wednesday, Nov. 18, from 9 a.m.-6 p.m., to pay respects.