One-stop early voting begins next week in Davie County, giving voters plenty of chances to cast ballots for everything from the president of the United States to a member of the Soil and Water Conservation District Supervisor Board before the Nov. 3 election.

Only one local election is contested, the Davie County Board of Education, with five candidates seeking the four spots, including Republicans Dub Potts, Paul Drechsler, Dwight Goodman and Wendy Horne, and one unaffiliated candidate, Cammie Paige Webb.

Richard Poindexter, Terry Renegar and Mark Jones are running unopposed for re-election to the Davie County Board of Commissioners. All are Republicans.

Kelly Cozart Funderburk, a Republican, is unopposed in the race for Davie Register of Deeds.

Incumbent Republican Julia Howard of Mocksville is being challenged by Democrat Keith Townsend of Mt. Ulla for the N.C. House of Representatives 77th District.

Richard Karriker is unopposed in his desire to become a member of the Davie Soil and Water Conservation District Supervisory Board. 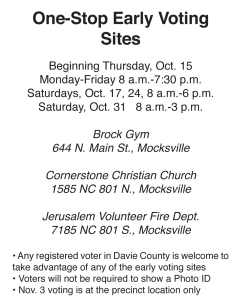