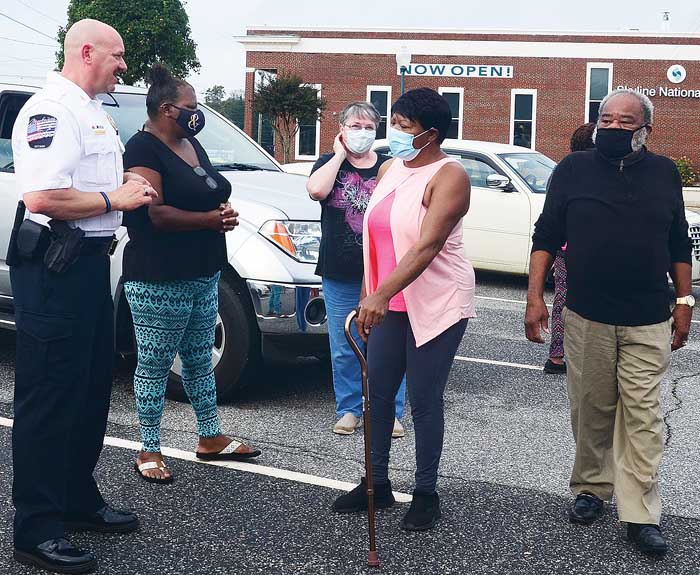 According to Reagan, the timing is right because the town appears to be headed in a different direction, and an early retirement incentive plan offered by the town allows him to retire after 28 years of public work.

He said that he has followed suggestions made after an independent assessment of the department, and most of those changes were made ahead of schedule. “But it’s concerning to hear concerns from elected officials who still think we need to do more.”

The next obvious change would be in leadership. “That falls on me. I take that responsibility.”

He said he told his officers – some 14 of whom threatened to leave if Reagan was fired or left the department – to do what’s right for them and their families – the same advice he had for those he hired.

“My job has always been to put us in a position where we can be self-sustaining,” meaning the department could run without it’s leader, who is there to handle problems and policies, not micro-manage.

“I encouraged them (officers) to look at themselves and use good judgment before making a decision,” he said. “I think we have the right people in our department. The department will continue to survive … and make a positive difference in the community.

Reagan has been with the department since 2008. Back then, law enforcement was held in high esteem by just about everyone. Fast forward to 2020, and that’s not the case.

But it is in Mocksville, and Reagan credits community policing policies for making that happen.

He gave Monday morning as an example. He watched the national news about riots in Louisville, Ky. Then he came to work and participated in a prayer circle, organized by local clergy, many of them people of color. They prayed for the department, the officers, the town and each other.

And that’s what is happening in Mocksville, he said. “I counter it with this right here. No one is here to tear down our city. We’re going to work together to make a difference … not through rioting and not through looting … but through prayer.”

Jason Ijames helped organize the prayer circle, which is a monthly occurance in the police parking lot at 9 a.m. on the fourth Monday. “We don’t only want to see them (police) when we call them,” Ijames said. “We thank God for our chief and our major (Koula Black) for working with us.”

“I love the initiative of us doing more things together,” Black said.

“You have a community that says ‘thank you’,” said Pastor Nettye Ijames-Barber. “He (Reagan) is a light in this community. He is humble and has a listening ear for the community. We pray for our officers’ protection as they serve us.”

“We have a great opportunity in Mocksville because of our size, that we can be brothers and sisters. We can be one community,” Ijames said.

The Rev. Dana Fruits said people should serve one another and love each other. She prays for a new day, “so we may truly live as brothers and sisters in Christ.”

It’s things such as this prayer circle, Coffee with a Cop and other community initiatives Reagan said he will take away from his time as chief.

He recently earned a master’s degree in public administration, but said his future will not be with local government. But at age 50, he knows he wants to keep working.

“The town and the people led me here. “The reality is, I had a great opportunity in local government, and the timing to retire just seemed right.”

Board says no to shooting range