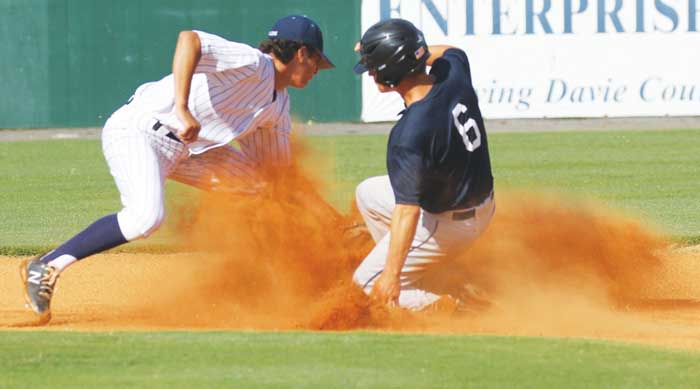 The Mocksville senior team opened the NC3 baseball season – a one-year substitute for American Legion – by splitting a doubleheader with Rowan County on Saturday at Newman Park. Rowan routed Mocksville 10-0 in the first game behind pitchers Ryan Street, Logan Rogers and Chase Shoaf, but Mocksville rallied in the seventh for a 6-5 win in the nightcap.

After Mocksville (1-1) got two hits in the top of the first in the opener (Ty Staz and Aaron Williams), Rowan hurlers set down the next 18 Mocksville hitter.

Street and Rogers struck out four apiece, with no walks. Shoaf walked a batter, but he faced only seven hitters the last two innings to close it out.

Rowan (3-1) got a big game from Goodine. The cleanup batter had three hits, scored three runs and drove in two. Leadoff man Klingler had two hits and scored twice.

Rowan had a three-run first, with Goodine, Dylan Driver and Casey Gouge singling home runs. Goodine’s run-scoring double to the left-center gap helped push the lead to 6-0 in the second, and Rowan cruised from there.

Rowan led 2-0 after three innings in the nightcap, as Mocksville stranded a host of runners early against Rowan starting pitcher Bryson Wagner.

But Mocksville bunched four hits for a three-run third and a 3-2 lead.

Rowan had seemingly retaken control of the game heading to the seventh, but two walks got Rowan reliever Scout Nichols in trouble and Mocksville put together a decisive, three-run rally. The go-ahead run scored on a throwing error.

Rowan put two runners on base in the bottom of the seventh, but failed to score.

Rowan took advantage of two errors in the sixth to go ahead 5-3, but couldn’t hold that advantage in the seventh.

Mocksville’s winning rally began with Williams and Joe Johnson drawing walks. When Josh Spillman reached on an error, the bases were loaded with no outs.

In the bottom of the seventh, Rowan left runners at first and second.

Brian Pitts contributed to this story.