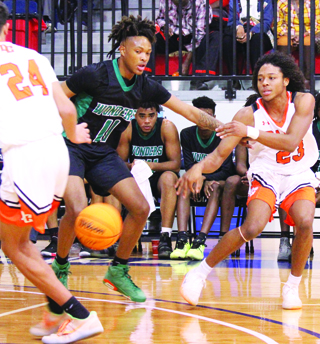 Justice Redmon makes a pass to Zach Smith in the Moir tournament at Catawba College. - Photo by Mark Floyd

Davie’s boys basketball team overcame a pair of eight-point deficits in the second half, pulled out a wildly entertaining 68-66 decision in overtime against East Surry on Jan. 3, and you could single out virtually every guy for making a contribution to the nonconference win in front of a large crowd on Hall of Fame Night.

The Cardinals, whose closest game before visiting Mocksville was a 51-40 win over Watauga, slipped to 4-1.

The War Eagles lifted their record to 9-3. Who woulda thunk it after they waved goodbye to four starters at the end of last year’s 24-3 season?

“It was a great ending to a great night,” coach Mike Absher said. “It had the atmosphere of a playoff game. Great crowd, great environment, two really good teams. You couldn’t have scripted it much better for a high school basketball game.”

Davie had to deal with Jefferson Boaz, a 6-8, 230-pound senior who quarterbacked East to the 1A championship in football. He’s headed to the Tar Heels and Mack Brown as an “athlete,” but he can do whatever the heck he wants on the hardwood as well. He only needed 16 shots to score 31 points. He drained 12 field goals, including 3 of 5 3-pointers.

“He played at a very high level,” Absher said. “We knew he was capable of making the 3, and obviously we knew he was a huge presence inside. He’s extremely talented. The plan was to limit those other guys that can score too, which is kind of what happened.”

It was a game of dueling banjos for all 36 minutes. But Davie did find itself down 42-34 in the third. That’s when Iverson King came off the bench and immediately buried a 3 – it was only his second shot attempt of the night.

When East scored underneath on an inbounds play on what amounted to the easiest points of the night, the War Eagles were again down eight, their fingers dug into the side of a cliff at 53-45.

The next rally was sparked by reserve guard Luke Williams, who pounded the ball onto the floor and pulled up for a 17-footer.

Then Brooks Johnson scored on a tear drop. Za’Haree Maddox posted up and converted a tough turnaround. King scored at the rim off a teammate’s miss. Moments later, King buried a short jumper to draw Davie within 57-55.

“We hit a stretch where we were struggling offensively,” Absher said. “Brooks, Za’Haree and Iverson’s ability to get in the paint and finish or create for other guys was huge.”

The biggest shot of the game came with Davie behind 59-55. James Reid spotted up in transition and Maddox found him, Reid’s 3-ball splashing with 1:48 to go in the fourth. The big man was 0 for 3 before that shot; he had not tried a 3-pointer before crunch time.

Maddox’s defense was crucial more than once. He caused a turnover at halfcourt with Davie behind 60-58 at 1:18. Then the sophomore drove, was fouled and hit two free throws for a 61-60 lead.

Boaz split a pair of free throws to tie the game at :23. Davie held for one shot, but Maddox’s bid in the paint would not go.

Overtime began with Justice Redmon taking a charge. On the next possession, Reid hit a dagger 3, again on a Maddox assist. Johnson converted a kiss off the glass on a dish from Redmon. East wasn’t quite done, though. A 3-pointer cut Davie’s lead to 67-66.

East had to foul, and King went 1 of 2 at the line to give Davie the 68-66 lead at :20. Everyone knew the ball was going inside to Boaz. He set up shop on the low block with his back to the basket. Maddox swooped in to make a game-sealing play, poking the ball away from behind. Reid recovered the loose ball and Davie ran out the remaining three seconds.

The Davie Crazies stormed the court. It was quite something for a nonconference game.

“We had given Za’Haree free rein to double the post,” Absher said. “What a big steal.”

Johnson did what he does, scoring 17 points with four rebounds. It was his eighth 17-plus game out of nine. Maddox compiled 16 points, six assists, four rebounds and two steals, giving him 38 points in two games. King had a clutch 10.

But Davie doesn’t win without Reid, who scored six points on  the only two 3s he tried and added six boards.

“The pick-and-pop for James. Yeah, Shane (Nixon) and Bruce (Wallace) had been telling me to have James pop, and sure enough he did,” Absher said. “That was a huge 3.”