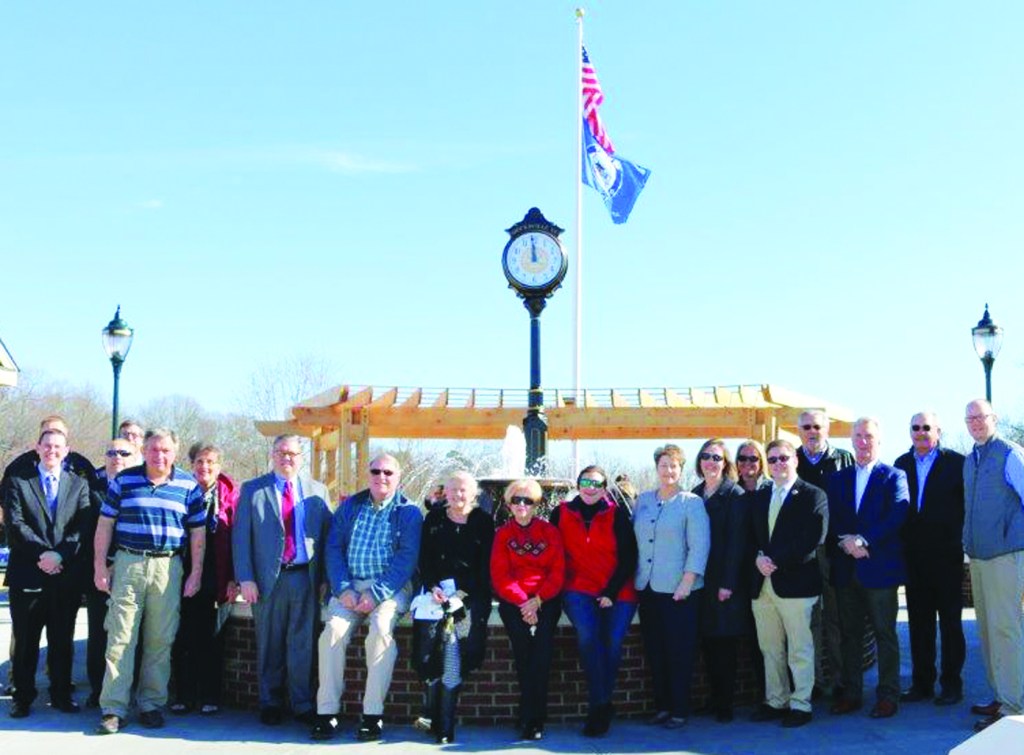 Rotarians in front of the Rotary Clock in the new Main Street Park in Mocksville.

It’s easy to forget everything that has happened over the course of a year, especially when you are constantly looking forward to bigger and better things.

The Rotary Club of Mocksville has been busy, with Barbara Owens completing her second year of presidency. She kept the members quite busy.

Rotarians Unite to Stop Hunger (RUSH) projects were held to collect food and cash donations for A Storehouse for Jesus during summer music events downtown, the Oaks festival and ‘Twas the Night Before Bed Race, along with help from the Davie County Early College High School’s Interact Club.

With a new school came a new Interact Club at Davie High.

In an effort to raise awareness, the Pancakes for Polio event was held featuring a live-stream from Seattle for World Polio Day.

It’s was another year of Souper Santa, collecting rice and soup for A Storehouse for Jesus.

Bells were rung for the Salvation Army.

The club held its first Discovery Rotary, in conjunction with Shadows’ Day, with 16 students shadowing Rotary and community members.

The “Table of Wisdom” lost two of its’ prominent members over the last year.

Carl Boon passed away last June. Boon was, in the Rotary world, a Major Donor, Paul Harris Society member, Paul Harris Fellow, Assistant Governor and Past Club President (2001-02). He encouraged members to get involved. He offered kind advice and inspiration. The club’s first golf tournament last October was held in his memory.

George Martin passed away in April. He was a Major Donor, Paul Harris Fellow, Past Club President (1973-74), as well as a Rotary Scholar. He was named as the club’s Rotary Shining Star during the official district governor’s visit in September 2017. He kept members on their toes – and kept them laughing. He was always inviting people to join him for lunch at Rotary, which was quite the honor.

A Rotary clock was erected in the new downtown Mocksville park this past January. The park and the Rotary clock were dreams of Martin’s and he was instrumental in making those dreams reality.

“The clock represents time,” said Stephanie Koefed, club public information chair. “Time to recognize Rotary’s commitment to the community. Time to honor the club’s history. Time to remember that time is ticking, always, and Rotary is comprise people of action. Time to change and time to do even more good in our community. Time to share Rotary.

If interested in learning more, join the club for lunch one Tuesday. Meetings are at noon in the EnergyUnited Education Center, 182 S. Salisbury St. Visit https://sites.google.com/site/rotaryclubofmocksville/.