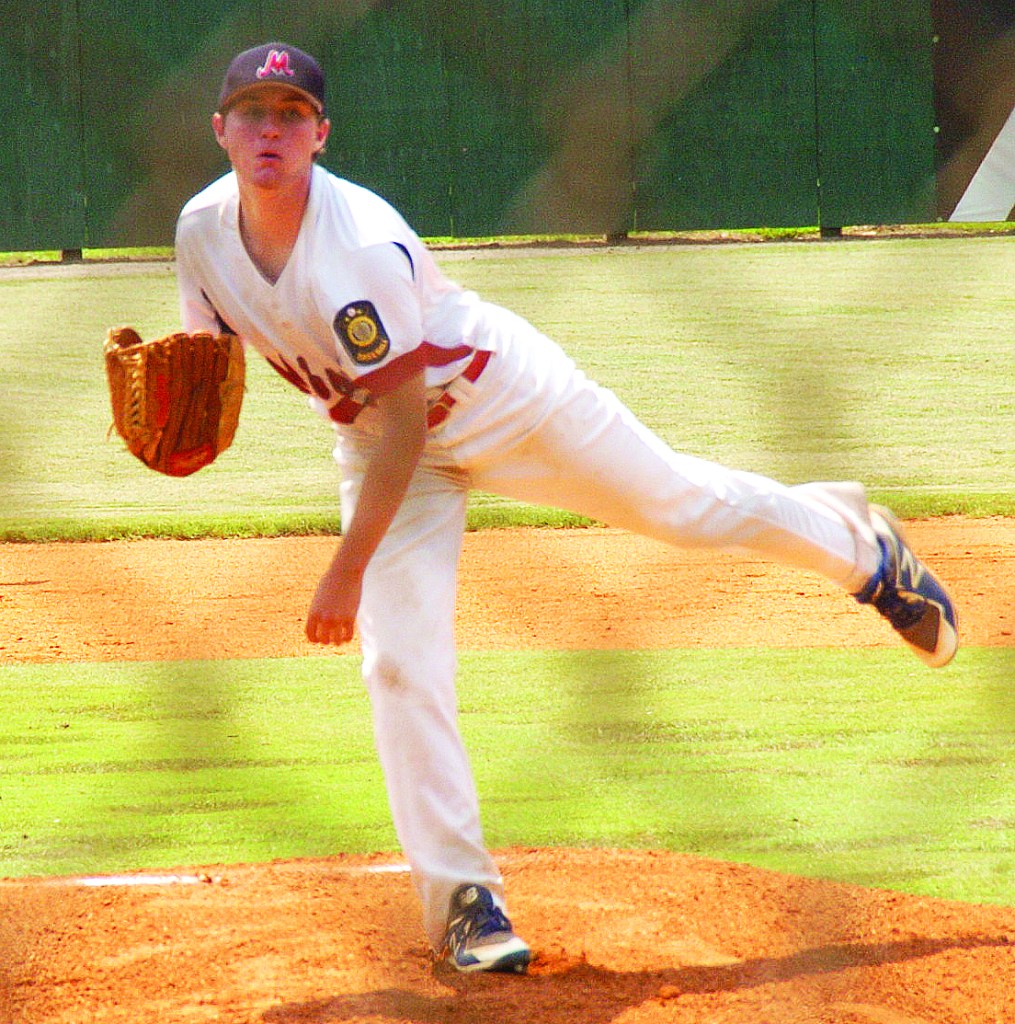 Wyatt Jester warms up between innings against Stanly County.

As discouraging as the Mocksville Legion baseball team’s 6-5 loss to Stanly County might have been on June 3, a 7-4 comeback win over Davidson County later in the day at Mando Field was equally encouraging.

Davidson was 6-0 with wins over Eastern Randolph (twice), Stanly (twice), Mooresville and Kernersville. And it was an emphatic 6-0, scoring 51 runs to 10 for opponents.

Davidson was on the brink of 7-0, leading 4-1 after the top of the fourth, but leadoff man Drew Martin and reliever Brandon Gregory came to the rescue as Mocksville improved to 6-4.

It was 1-1 before Mocksville experienced turbulence in the fourth. With two outs, Davidson used a walk, an error and back-to-back RBI singles to take control at 4-1.

Mocksville roared back because Martin was big-time clutch. In the bottom of the fourth, Jamie Sheek singled, and with two outs, Peyton Winebarger singled. After Maston Renegar walked, Martin tied the game with a two-run hit.

Mocksville would score six unanswered runs to defeat Davidson for the fourth consecutive time. In the fifth, Carter Foster was hit by a pitch, Patrick Usher reached on the shortstop’s error and Sheek walked to load the bases. Back-to-back strikeouts kept the game 4-4. The decisive run scored when Davidson’s pitcher beaned Renegar. Martin made sure the lead was safe with his second two-run single in as many innings.

Blake Winebarger’s offensive stardom continued to rise. He’s at .464 while getting at least one hit in all eight of his games.

Sheek went 2 for 2 with a walk and three runs. It was his first start since returning from an injury that cost him a handful of games.

“That beefs up our middle infield,” coach Charles Kurfees said. “(With Sheek at short and B. Winebarger at second), that’s about as good a middle infield as you’re going to find in Legion.”

Meanwhile, Gregory was in top-shelf form while getting the win in relief. Before Gregory took the ball, Kurfees liked what he saw from Justin Chaffin, who went four innings in his first Sr. Legion start on the bump.

“We needed to get Chaffin a little work,” he said. “He did alright.”

Gregory’s ERA was 6.00 after two relief outings. He had a huge breakout in this one, throwing three scoreless/one-hit innings, walking one and striking out six. He shaved his ERA all the way to 2.62.

“I was real impressed with Gregory,” he said. “He did really well. He’s going to get some more innings.”