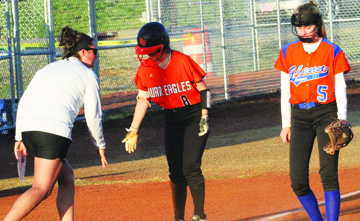 An era of considerable sweetness ended on a sour note for Davie’s softball team and six seniors who helped Davie capture conference titles in ‘17 and ‘18.

The War Eagles rocked West Forsyth 11-0 on March 23. When they beat West 5-3 on April 17, they had a four-game winning streak in the series.

The odds were clearly against the Titans as they faced Davie twice in the postseason, but apparently that’s the way junior pitcher Alex Rodriguez and the Titans like it.

In the Central Piedmont Conference Tournament final on May 4, none of that fazed West, which upset Davie 3-1. Rodriguez worked her magic again in the second round of the state 4-A playoffs at Davie on May 11. The lefty dealt Davie its first shutout loss since March 8, 2017 as West broke in front in the top of the first inning and won 4-0.

West, the No. 10 seed in the West Region, was coming off an 11-0 rout of No. 23 Ragsdale in the first round. No. 7 Davie received a first-round bye and was playing its first game since the 3-1 loss to West.

The War Eagles destroyed the ball during a 10-1 stretch between April 10-May 3, outscoring opponents 122-44. Their fortunes were much different in the final two games, scoring one run in 14 innings and finishing 15-10.

“It was a hard pill to swallow because I still think we’re the better team,” said coach Dawn Lowery, who is 73-33 in four years at Davie. “But Alex has been very effective against us the last two times.”

A single, sac bunt and single set up West’s run in the first. When the ball was misplayed in the outfield, leadoff batter Bella Flynn scampered home.

But Davie starter Rachel Bostic responded with zeroes from the second through the fifth. Unfortunately, Davie’s offense was experiencing its darkest hour. Rodriguez (3 Ks) struck out eight fewer batters than the May 4 meeting, but it hardly mattered because she twirled a three-hitter with zero walks and 46 strikes in 60 pitches.

“(In the CPC Tournament final), I think between the teams we had 23 runners left on base,” West coach Kevin Baity told the Winston-Salem Journal. “I was thinking tonight was going to be about a 10-9 ballgame, but Alex was lights out. When she’s pitching like that, she’s hard to beat.”

Bridgett Tierney, Sierra Ferguson and Emilee Dishman each went 1 for 3 for Davie’s only hits. Davie mustered two hits in the first five innings. Ferguson led off the second with a single, but Rodriguez retired the next 11 batters. Dishman had a two-out knock in the fifth, but the next batter popped out.

Trailing 3-0, Davie had a chance in the sixth. Aisulu Ball reached on an error and Tierney singled. With two on and no outs, Davie fizzled by popping up a bunt, popping out to an infielder and striking out.

“We worked pretty hard this week on recognizing the changeup and adjusting to it,” Lowery said. “I was pleased with (three strikeouts), but we just couldn’t find the holes. We popped up two bunts at crucial times that killed our momentum, and we couldn’t find it somewhere else.”

West had all but KO’d Davie in the top of the sixth. After Brianna Lucero singled, No. 3 batter Sam Martin blasted a two-run home run to left-center. West added an insurance run in the seventh.

“We could not have played any better,” Baity told the Journal. “We played our A game from first pitch to last pitch.

“I think our girls didn’t quite know how to handle the stage the first couple times. Our first two conference games we were run-ruled (12-2 by East Forsyth and 11-0 by Davie).”

Bostic (five innings, seven hits, two earned runs, no walks) and River Simpson (two innings, two hits, one unearned run) did a good job in the circle. You couldn’t expect them to hold West’s offense to nothing.

It’s safe to say it’s going to be very difficult to top Ferguson.

“She is just as effective a defensive player as offensive,” Lowery said. “Her fielding percentage the past four years is very, very high. Offensively, I don’t know what else to say about that. She’s the best that’s come through Davie County (in the fastpitch era). She’s one of a kind; you pray one like her comes around again sometime soon. Off the field, she’s a genuine person. She could be cocky and have a little arrogance. But she’s humble. She’s a team player. She wants her teammates to be more successful than herself.”

Tierney and Devereaux put up glittering numbers as well. Tierney, the center fielder and leadoff batter who is headed to Lander University, tied the season record for walks/HBPs with 18 this year. In the career category, she is first in hits (136), second in at-bats (315), second in runs (118) and tied for third in walks/HBPs (43).

“Bridgett is a very hard worker,” Lowery said. “I think she is a lot better than even she thinks she is. I think she’s got a bright future at the next level. I’ve watched her grow up so much on the field and off the field. I’m really proud of everything she’s accomplished. She covers a lot of ground in the outfield and she did a lot of different things at the plate – so someone is going to have to fill some big shoes.”

“She’s a special kid,” Lowery said. “Players and young women like her don’t come around every year. She’s a natural leader. She’s a positive role model. At the same time, she kicks butt. She’s one of those players that does it all. She’s a great example in the class room. She does whatever you ask of her.”

Sydney Hendren, who will play at Guilford in 2019, was as reliable as it gets behind the plate.

“The ones that did run, she often caught them stealing,” Lowery said. “There weren’t many times that teams would try to steal on her because they know what she’s capable of. She works her butt off for the pitchers. She kept us in the game a lot of times when pitches could have gone past her. We’ve had a lot of good catchers and she’s one of the best.”

Dishman, who accepted a part-time role in 2017, saw her playing time double in 2018, going from 41 at-bats as a junior to 80 this year. The second baseman will play for Elizabeth City.

“She’s a selfless player,” Lowery said. “She’s one of those who will get equipment out before practice and ask what can she do to help you. People don’t see that kind of stuff. To start (full-time) as a senior and make an impact speaks a lot about her and her love of the game.”

Simpson was a feel-good story in ‘18. Last year she logged just 32 innings, mostly against inferior competition. As a senior, she earned five wins and two saves while making nine starts and 13 relief appearances. She pitched 65 innings and posted a 3.76 ERA while splitting time with Bostic. She’s the only senior who will not play at the next year. She’s going to attend college at UNC-Wilmington.

“She’s one of those players that wants to be successful and puts the work in,” Lowery said. “When you’re playing behind a pitcher as a junior (in Olivia Boger), that can be really hard and maybe hurt your confidence. But it didn’t. River came back this year and did her job. She got us out of some tough situations. She pitched some great games. She’s not going to pursue a (college) career in softball, but she’s had a very successful career between travel ball and school ball, and I think she should be very proud of herself.”