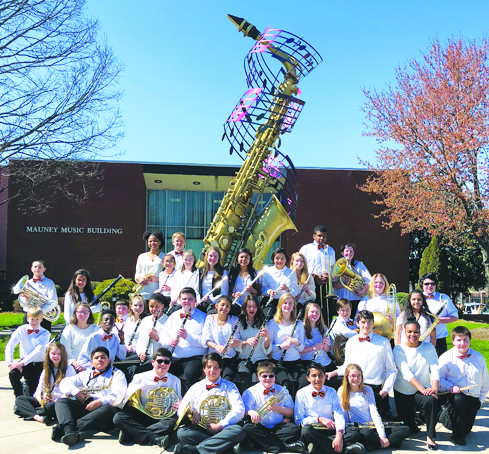 The South Davie Middle School 8th Grade Band took part in the state-wide Music Performance Assessment (MPA), Thursday, March 22 on the campus of Lenoir-Rhyne University. The band earned a Superior rating in grade three music, and this score is the most distinguished honor that a band can earn at this event.

The process bands take when performing at MPA is extensive. Bands choose three pieces of music; a march and two other pieces which have to come off of a specific, NC Bandmasters music list.

There are six grade levels of music with one being the easiest and six being the most difficult. The pieces are performed for a panel of judges that evaluate each band using extensive rubrics. There are seven categories that the judges are looking for when judging; tone, intonation, technique, rhythm, balance, musicianship, and general factors. The rating is determined by the combination of As, Bs, Cs, Ds, Fs those categories receive.

Bands also do a sight-reading where the band gets five minutes to look over a new piece, without playing it, that neither the band nor the director have ever seen. Once that time ends, students perform it and receive a rating based on their execution of the piece.

All four ratings give each band one overall rating, and this year, all four judges rated the band’s performance as Superior.

“Our students have worked tremendously hard preparing for this performance the past two months. Music was handed out mid-January, they rehearsed for four hours at our MPA Retreat on a Saturday morning in February, and performed an MPA Preview Concert in early March. The retreat and the preview concert included bringing in professionals from around the area to work with our students and offer feedback of ways to make our band better. They consistently went the extra mile, and I am extremely proud of these students for obtaining this outstanding honor,” said band director, Justin McCrary.