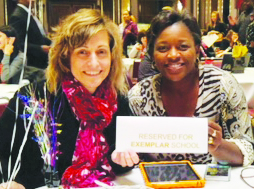 The “Sweet 16 – Pounding Our Way to Proficiency” ceremony celebrated 16 strong years with the N.C. Department of Public Education, which has promoted the continued establishment of PBIS schools throughout the state.

Positive Behavior Interventions and Supports (PBIS) is a model Davie County schools use to promote positive behavior growth. The PBIS model involves a whole school approach that provides positive interventions, reinforcement and incentives to students who continuously promote positivity and appropriateness when it comes to daily behavior.

PBIS is data driven, as it determines strategies for identifying and teaching expectations for all students, acknowledging appropriate behavior and responding to inappropriate behavior. These components of PBIS assist schools when it comes to being proactive in helping students with their overall success.

Research of the PBIS model indicates that when students are assisted with promoting and obtaining positive behavior, they are also more likely to excel in areas of academic success.  The PBIS Model places high emphasis on the positive component. This is highlighted with school wide celebrations throughout the year and in a daily school rewards system.

There are three achievement levels a school can obtain, based on the school’s  yearly progress while implementing components of the PBIS model. These three achievement levels include: Green Ribbon, Model and Exemplar. In order to be Exemplar (the highest level of achievement) each school has to show three consecutive years of growth in academics, behavior and in one additional area for their school. An Exemplar school is also required to submit a presentation for the NC PBIS State Team to review. Once the state reviews these requirements, the State Level PBIS Team makes the final determination of what status level your school achieved that school year.

During this year’s PBIS Recognition Ceremony, the following schools received awards for the 2016/2017 school year:

This was the first year Central Davie Academy implemented the PBIS model in that school.

Group working to get dogs off chains