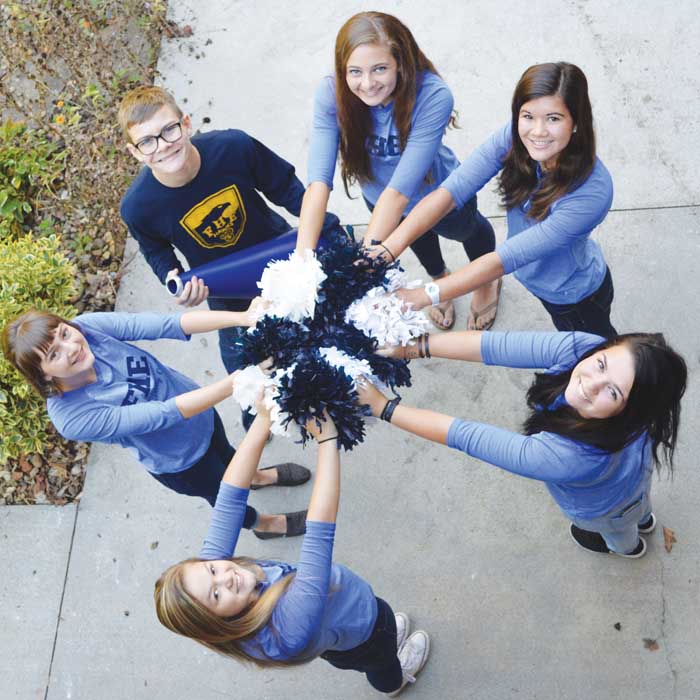 The FHE (Forsyth Home Educators) is a home school organization in Forsyth County, open to those from other counties.

This year at the Macy’s Thanksgiving Parade, the FHE Cheer Squad will perform with hundreds of other cheerleaders in the parade.  All cheerleaders completed competition with high marks and that’s what will get them there.

There are 22 sports teams ranging from middle school through high school at FHE.

The cheerleading squad started five years ago with five cheerleaders and it has grown to a total of 12 students.  Three squads cheer for middle school, JV and varsity.

Home-schooled children don’t have gyms to practice in so it’s challenging when everyone on the squad is located in different counties.  They practice in a church building where Wednesday meals are served weekly.  It’s a large space and most importantly, it’s free. Practices take place once or twice a week.

Christian Cheerleaders of America host competitions each year and FHE competes once or twice each year.

Part of the prize package for grand champions was go to the Macy’s Thanksgiving Day Parade and perform a cheerleading routine with other teams.  Out of all the hundreds of cheerleaders, they are the only home school team.

This is the last year cheerleaders under the age of 19 are eligible to participate so the seven who are participating are excited:  Isabella Lowder, Miles Collins and Kenzie Collins, Davie County; and Bonnie Shelton, Micayla Hall and, Meredith Gaines, Winston-Salem. Coaches are Judy Hall and Tina Gaines.

One cheerleader who graduated a year early is especially excited about the opportunity. Bonnie Shelton lost a kidney to cancer in 2003 with a 96 percent prognosis and four months later found out she had multiple tumors in both lungs with a 30 percent survival rate. She has been in remission ever since with some scares along the way that have proven to be okay.

“This cheerleading squad has been one blessing after another and to see her out there jump, cartwheel, run, dance and do everything; every single day this kid could make me cry when it comes to life. She’s strong, she never complains, she does what she has to do, shows up when she has to show up, doesn’t complain with another test or another ultrasound.”

The fundraisers helped a lot to pay for each student to go on this trip and most students did odd jobs to help pay their way.

The coaches, chaperones and cheerleaders head to New York on Saturday. Their itinerary will keep them busy each day from 8-11, including practicing a routine with hundreds of other cheerleaders from across the country.

Spirit of America is organizing the special event.

Each team had a CD of the routine to watch and practice at home and soon they will gather together to make sure they are all on the same page.

All cheerleaders will be dressed in the same uniform.

The cheerleaders get a two-hour break in their day and will get in a Broadway show and visit Radio City Music Hall before heading home.

Kenzie Collins, who is a freshman at Western University, isn’t nervous, she says. When they won the grand nationals she said it was amazing. “We had no idea this would even be an opportunity, we were so shocked.”

Soon, this once in a lifetime moment will happen, and if we all keep our eyes peeled for a large group of cheerleaders, maybe, just maybe, we’ll see this special homeschool group.