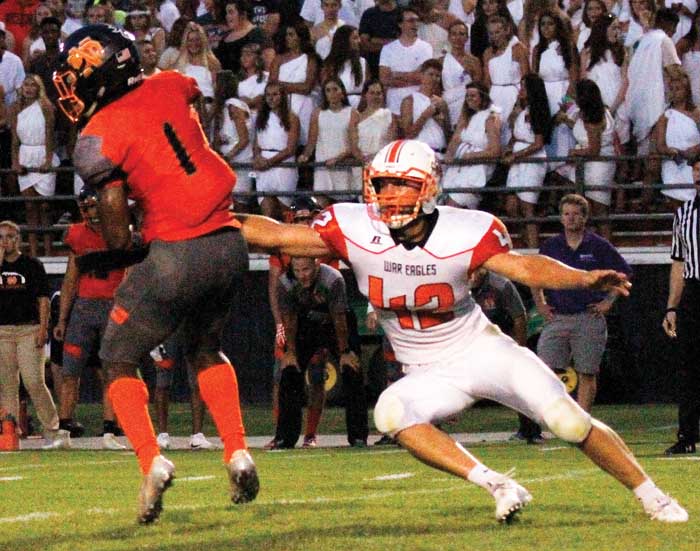 Linebacker Cody Hendrix is ready to make one of his 12 tackles for the game.

Defense was the reason Davie’s football team was in contention at halftime of Friday’s nonconference game at North Davidson. When the defense began wearing down in the second half, the War Eagles were done.

To say nothing went right for Davie’s offense would be an understatement. The defense came up with five turnovers in the first half and the offense failed to take advantage all five times, Davie’s only points coming on Hite Merrifield’s pick-six.

Davie’s offensive struggles in the overtime loss to Page was not just a blip. This was the worst game imaginable for that unit. It had 7 rushing yards as seven sacks resulted in a loss of 43 yards. It mustered 36 total yards. It went 1 for 12 on third-down conversions. It punted 11 times. Davie’s longest rushing play in two games is 9 yards.

“At times we had the right plays called,” Davie coach Tim Devericks said. “There were some unsound blitzing at times, a gamble, and it was working for them. So they kept doing it.”

North turned it over on four of its first five possessions.

• On North’s third play from scrimmage, Broc Barnette intercepted a pass over the middle at midfield and returned it to the North 38. Davie picked up 7 yards and punted, a bad omen of what was to come.

• T.J. Boyce fumbled and Kinston Whitener recovered at the North 22. Josh Hall was sacked on first down and Ben Summers punted from the North 32.

• North quarterback Josh Sicignano dropped the shotgun snap and Jalen Redmond pounced on it at the North 47. Josh Robinson ran for 9 yards on first down, but (gasp) Davie went backwards the next two plays and punted.

“We preached turnovers all week in practice,” Devericks said. “Kids get excited (when they get a turnover), and that brings juice and energy to the team. We’ve just got to start taking advantage of that.”

Davie’s defense took matters into its own hands on Sicignano’s third-and-7 pass with nine minutes left in a scoreless half. Lineman Ronald Wilson reached up with his left hand and batted the ball. Playing center field, Merrifield grabbed the deflection at the North 34. The safety encountered heavy traffic at the North 25 but received blocks that sprung him through a tiny gap. North defenders dove for his feet at the 15 but Merrifield was too fast, taking it to the house for a touchdown. Skyler Schoppe’s PAT provided a 7-0 lead.

“Our saying in the secondary is, if there’s a tipped throw, those are ours,” Devericks said. “We practice that and that’s what happened. Hite picked up some blocks. Everyone worked together and he was able to get into the end zone. There was a lot of traffic there, but his teammates responded and he was able to get through some trash.”

Cody Hendrix and the defense forced a punt. North was guilty of pass interference against Evan Little on third down, and Davie was at the North 33 with a chance to put the home side in a hole. But it let North off the hook again, punting on fourth down from the 36.

“I’m super proud of our team for how they came together because we faced a lot of adversity, especially that first half,” Brian Flynn told The Dispatch after picking up his first win as North’s coach.

The Davie defense’s mojo began to fade on a third-and-9 play. Jacob LaFlesh ran a take-off route against one-on-one coverage and Sicignano found him for 48 yards to the Davie 31. You’re not going to hold down an exceptional talent like Boyce all night, and he started left and cut right to score from 25 yards out, tying the game at 7 with 2:50 remaining in the half.

Merrifield struck again late in the half. Whitener shadowed the intended receiver over the middle and Merrifield got his second pick at the Davie 45. He returned it to the North 32, but a penalty pushed Davie back 23 yards. After two unsuccessful run plays, Davie let the clock run out.

It was 7-7 even though Davie was ahead 0-5 in the turnover department. Not only was the defense responsible for Davie’s only points, it had held North to four first downs.

The second half was the same story for Davie’s offense and a different story for the defense. Boyce found a consistent groove and LaFlesh made hero catches as Davie’s defense wore down from being on the field way too long.

Running the same play that resulted in 48 yards late in the second quarter, Sicignano and LaFlesh hooked up for a 37-yard TD with 9:43 left in the third quarter.

On the next North possession, LaFlesh ran a post route that went for a 22-yard score, making it 21-7 with 2:44 left in the third. Sadly for Davie, the game was over right then and there.

“He’s a tremendous player,” Devericks said. “You saw he’s got relentless energy and he keeps pounding and pounding. And he was able to wear us down.”

After three straight minus-yardage plays, Davie’s 33-yard punt was returned 28 yards. It was that kind of night.

Boyce got the handoff six times during a nine-play, 62-yard drive that capped the scoring. Playing turnover-free ball in the second half, North finished with 167 rushing yards and 166 through the air. Sicignano shook off his four-turnover first half to go 5 for 5 for 104 passing yards in the second half.

Meanwhile, Davie’s silent offense managed one first down after halftime. Hall was slow to get up after the seventh sack with under four minutes left. Summers entered at QB and took the snaps on the final four plays.

“(Hall) got driven into the ground,” Devericks said. “I think he’ll be alright.”

Following the game, the War Eagles suffered another loss. During the return on his second pick, Merrifield was injured. He did not play during North’s second-half dominance, and the junior could have very well played his final down of football. Reportedly, it’s the third time he’s endured this injury in the past year, including once during Davie baseball.

Merrifield is a big piece of the defensive puzzle. He’s a third-year varsity starter. As a sophomore, he was first with six picks, which marked the seventh-most in a season and the biggest total in nine years. He was named to the All-Northwest team. His second INT of the night was the eighth of his career, putting him nine from the Davie record.

But baseball is his No. 1 sport, having verbally committed to Wake Forest over the summer.

Notes: The injury bug has bitten Davie hard. De’maura “Mo-Mo” Isaac, Zach Clubb, Joey Gadson, Mason Wilson and Cooper Wall were among the missing at N. Davidson. … Redmond has two fumble recoveries in two games. … After Davie’s TD, Schoppe, a junior, came on to make the extra point instead of freshman Guillermo Moure, who went 2 for 2 against Page. “They battle every week,” Devericks said. … Hendrix had a splendid game with 12 solo tackles (16 total). Matthew King had 13 tackles, Whitener and Mitchell Ijames seven each, Redmond six, Barnette five and Wilson four. … With cornerback Isaac out, sophomore Samuel Hendrix got the nod for his first varsity start.