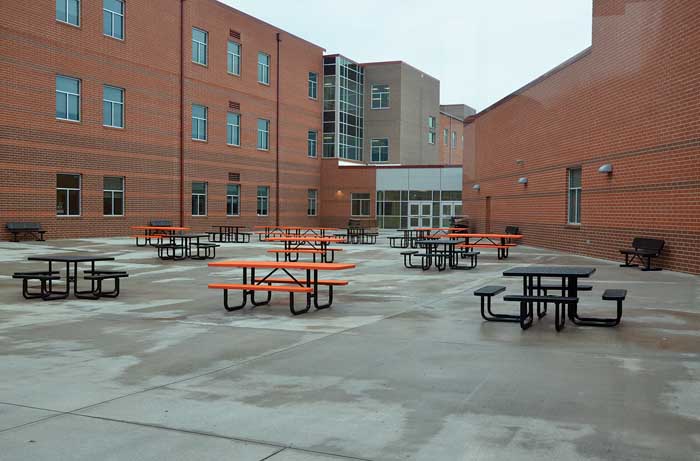 Workers are putting finishing touches on the new Davie County High School off of Farmington Road.

Doyle Nicholson is getting plenty of exercise these days.

The principal at Davie County High School has been at the new campus being completed off Farmington Road, and he’s walked the entire property countless number of times, not only giving tours, but getting acclimated in his own right.

It’s a big campus, but more importantly, according to Nicholson, it will provide Davie students with an environment much more conducive to learning.

Take the drafting classroom, for instance. It now contains double computer screens so students can immediately see what they are doing.

The new cafeteria is a big asset, and 650 can be seated at each lunch period in an open indoor area and an outside courtyard. Before, it took five lunch periods to accommodate students. Now, they’ll have 80 minutes – 40 for lunch and 40 for things such as clubs, tutoring and studying.

One of the main design plans, Nicholson said, was flexibility. Most rooms are built to where chairs can be moved; technology can be placed in several locations.

“Flexibility was the key word we kept using … to do things in different formats.”

As visitors enter the school, they will walk into the office area, the only door that will be unlocked during class hours. That area also includes the student services (guidance) offices.

From that glass enclosure, the cafeteria seating area is in the middle, with the gyms and locker rooms to the left and the auditorium to the right. Around the corner is the cafeteria.

Even the technology is improved, with many classrooms coming with interactive large screens.

The football stadium seats 4,250 spectators. A practice field is three football fields long, allowing different teams to practice at the same time. Because there is no field house, teams will use locker rooms at the school during game times.

There’s a new baseball field on site, and a softball field is nearing completion.

Nicholson is entering his fourth year as Davie High principal, and is excited as incoming students about the new location.

He’s ready for the opening day, when unlike in years past, seniors will be just as lost looking for classrooms as the freshmen.

One thing that is missing, lockers lining the halls. There aren’t any. Even before plans were made for the new school, high school students rarely used lockers they were assigned, Nicholson said.

The school employs 188 full- and part-time workers, he said.

The school is equipped with video monitoring throughout.