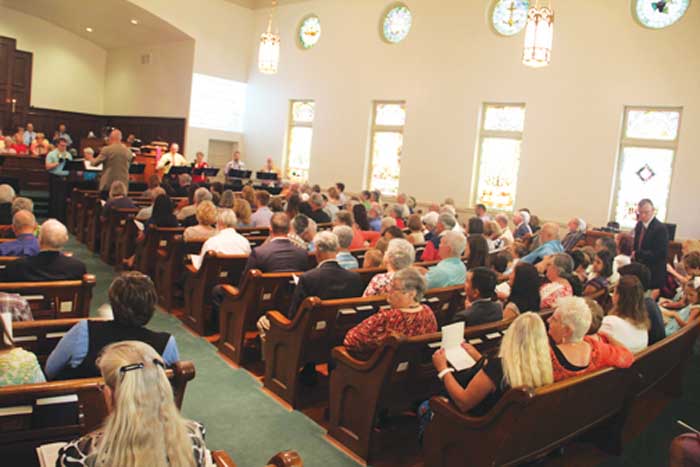 The pews are full for the big celebration.

First Presbyterian Church of Mocksville celebrated its 250th anniversary over Memorial Day weekend, May 27 and 28.

From its humble beginnings in a one-room log structure at Joppa Cemetery, to the stately brick sanctuary built at South Main and Lexington streets in 1905, the church has served as a portal of Christian witness in this town for two and a half centuries. As with most celebrations of this type, there were special activities, honored guests, old and new friends, and the celebratory cake (without the 250 candles).

The anniversary kicked off with a service at Joppa Cemetery on Saturday morning. The welcome and opening invocation were by the present pastor, the Rev. Dana Fruits, as the warm spring sun began to shine through the oak and hickory trees. Then, bagpipe music filled the air as John Hatcher, church choir director from 1965-1967, played “Scotland the Brave.”

Sam Martin, publicity chair of the N.C. Presbyterian Historical Society, made a presentation honoring the history of the church. The society’s certificate was accepted by the anniversary celebration committee on behalf of the congregation and Session.

The Rev. Cyrus Bush, choir director at FPC since 2012, led the audience in the singing of old hymns, followed by a presentation made by Fruits. Framed replicas of the new church logo, made by the children, were given to the newest member of the congregation in attendance, Hollie Jones (joined two months ago) and to the longest-termed member in attendance, Lash Sanford (71 years).

Fruits read a brief history of the church’s beginning at Joppa. Several gravesites of noted Presbyterians were flagged, and she highlighted each with a short biography.

Next up were the Presbyterian Pickers (Terry Johnson and Hank Van Hoy on guitar, Brad Parsley on mandolin and Glenn Scott on banjo). They entertained the crowd with several favorites, including “I’ll Fly Away” and “Amazing Grace.”

Annette Eckerd Goard gave the keynote reflection, titled “I Wonder if God Sings Alto.” She gave a touching and heartfelt look back at her youth, spent within the confines of First Presbyterian Church. Her faith journey, molded by those early years, has now culminated with her present entry into the ministry.

John Hatcher played “Bluebells of Scotland” on the bagpipes and Fruits concluded the first day’s activities with the benediction and an invitation for all to enjoy the refreshments prepared by the Congregational Care Committee.

The second day of celebration commenced with a social gathering in the fellowship hall at 9:45 a.m. Visitors were greeted by the music of the Sonata Digital Carillon Bell System, given to the church by Jack and Dorothy Corriher in memory of Dorothy’s late husband, Joe Hemrick, in conjunction with the 250th Anniversary Celebration.

The celebratory worship service began at 10:30 with the playing of “Grandeur” by the Bells of Praise. Fruits welcomed the packed sanctuary to this historic and reflective day of worship and thanksgiving. The house of worship clearly showed its connection to the past as well as its path to the future — the past indicated by the ornate stained-glass windows, hand crafted in 1905; and the future, a handmade banner by FPC member Terri Soyka displaying the new church logo, “Loving God, Loving Others.”

The Rev. Sam Marshall, General Presbyter of Salem Presbytery, brought greetings from the Presbytery and General Assembly, congratulations to the congregation, and a thankful remembrance to all veterans on this Memorial Day weekend. He presented the church with a 250th Anniversary Certificate.

The opening congregational hymn, “The Church’s One Foundation,” took on new meaning with the addition of two verses written by FPC member Linda Barnette. Her words touched on the establishment of the Church at Joppa, its subsequent move to Mocksville, and the congregation’s past, present and future Christian witness.

Following the hymn, Annette Goard led the congregation in the Prayer of Confession and Assurance of Forgiveness. Later, the day’s offering was collected in special bags attached to long poles, hand-crafted by FPC member Barbara Johnson. These bags were identical to the ones used by the church in the late 1800s and early 1900s.

The offertory, “Bright and Beautiful,” featured Gray King, church organist since 2009, and FPC member Melissa Lynch on flute. The choir’s anthem, “We Praise You, O God,” combined the talents of both the Chancel Choir and The Bells of Praise. FPC Elder Carl Davidson read the opening verses of scripture from the Book of Acts.

The Rev. Dr. Neal Carter, who served the church from 1998 to 2004, performed double duty, beginning with his guitar in hand for the children’s message. As he sang the familiar lyrics to the ’70s classic “Get Together,” the congregation spontaneously joined.

Carter’s sermon, titled “Congratulations; Now Keep Moving!” was a reflective, yet motivating, message. He spoke not only to the faithfulness and service required to sustain a church for 250 years, but the willingness to grasp the opportunities that will guide it for another 250 years. As his sermon title suggested, he offered congratulations for the past achievements, and urged the congregation to now see what the future holds.

Following the sermon, the Rev. Karen Richardson Dunn provided the Prayers of the People. Dunn is the daughter of the Rev. Leland Richardson and his wife, Juanita. Richardson served First Presbyterian Church from 1970-1997, the longest tenure in the 250-year history. Before Dunn began, she informed the congregation that her father penned the words to the prayer that she was about to deliver on this historic day.

As the worship service drew to a close, the Rev. Sandie Greene, active in the life of FPC since 1985, gave the charge and benediction. John Hatcher played “Amazing Grace” on the bagpipes, and the congregation gathered on the front steps for a group photograph before enjoying a reception in the fellowship hall.

During the reception, members and guests were able to tour the church and view several displays. Included were books from the Church at Joppa, printed in the 1700s; a Bible, church pew and front door key from the 1840 church building; the first organ ever used at FPC — an 1875 Estey Cottage organ; and early church pulpit furniture, communion sets and a baptismal bowl. Heard, but not seen, was the church bell, purchased from the Town of Mocksville in 1922 for $140, after hanging for nearly 100 years in the original Davie County Courthouse.

The church’s celebration and mission did not end at the close of the weekend’s events. As Carter urged, the congregation has kept moving. To coincide with the anniversary, the Session approved a long-term mission project with the Living Waters for the World organization. Six church members recently attended training in Oxford, Miss., to learn how to install water filtration systems. The same team will go overseas – possibly to the Yucatan – to bring clean water to those who need it.

So as the church’s forebears came across the ocean and settled along the Yadkin River, the congregation of First Presbyterian will continue to provide water – the source of all life – to others.