Graduation day to be ‘the best time ever’ 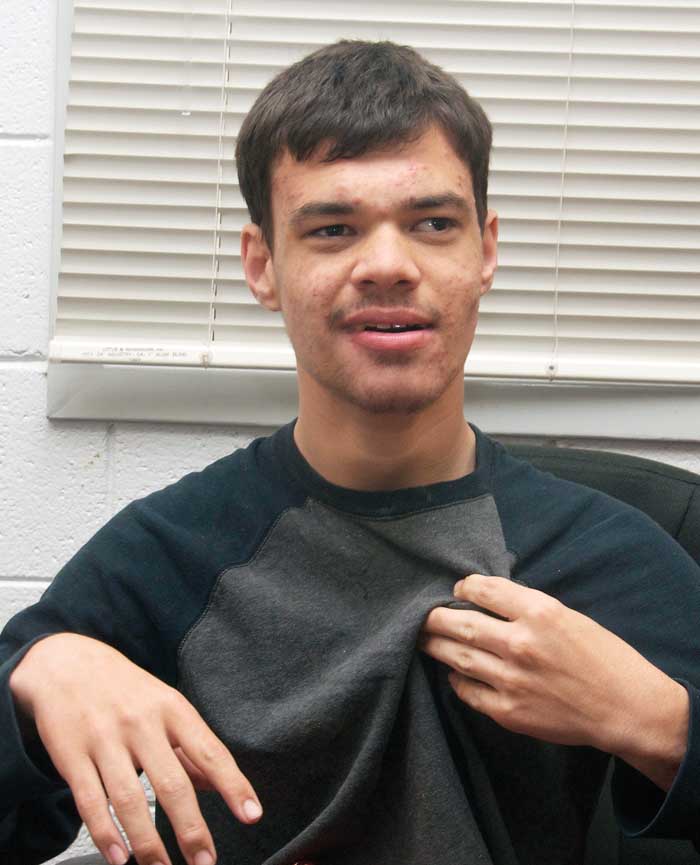 As graduates mingle during commencement exercises Saturday morning, Zach will likely be working the crowd, smiling, calling out names. After all, he knows just about everybody at the school.

Zach, 21, was born not breathing, and doctors told his mother Angie and father Ross Spry there was no hope he would live. He was rushed from Rowan to Brenners Children’s Hospital.

For his first eight minutes, he did not breathe. Ross didn’t leave his side that first night, praying, begging his little “Zach Man” to breathe on his own. Mom was still in Rowan  Hospital, ready to break out until they allowed her to visit the next day.

Zach did start breathing on his own, but the lack of oxygen in his young brain left him with cerebral palsey.

“He surprised everybody,” Ross said.

Zach’s friends and supporters are too numerous to mention, but mother Angie McKnight is thankful for everyone who made a difference in Zach’s life. Some were vital to his development, in school, in the family, in the community. Some helped save his life.

“It certainly has taken a village,” Angie said.

“A lot of people have helped,” said grandmother, Ann Spry. “What makes it easy is everybody loves Zach, and Zach loves everbody. He’s had a lot of love from a lot of good people.”

That is one of the reasons he walks the Davie High halls with the help of a walker. It gives him a barrier from when he spots a friend.

Stepdad Matt McKnight, also a teacher at Davie High, says every time he passes a classroom, he’s looking inside to see if he recognizes someone so he can greet them. And classmates are constantly coming up to him in the hall.

Zach’s personality has gotten him far. His grandmother calls it a strong personality. His dad calls him hard-headed.

“I’ve lost some of my identity,” Ross said, “because everywhere I go, I am Zach’s dad, not Ross.”

Matt said Zach is routine oriented. He wants to know what will happen during the day or weekend, and then expects that to happen.

“He knows that routine, but if the routine changes …”

The routine doesn’t have to be about him. He loves watching his sister play softball, playing board games and going places.

And there is that genuine excitement he shows when opening presents.

“He’s like that in class,” said teacher, Carlyn Cogar.

“He’s always had the ability to touch people’s lives, just by being in the room,” Ross said.

Angie tells the story of encountering a very angry man in the Verizon store. Zach talked to him, and that anger went away.

“Everywhere we take him, somehow or another, he touched people,” Angie said. “I’ve seen that throughout his life. It was a miracle he lived, and watching him grow and the people has touched is another miracle.

“Everything he has done, he has had to learn. So every day, I could see a miracle. I love that part of my life. When he does something new, I know that’s what it is. That has always been a joy and a blessing – a miracle.”

“When God gave Zach to us, He knew what He was doing,” grandmother Ann Spry said. “I wouldn’t change anything. We’ve been blessed.”

“It’s never boring,” Matt said. “Some days it’s trying and some days you tear up with what you get out of him. Especially with the other kids, he’s right there with them.”

Zach has a girlfriend, Sophia, whom he took to the prom. He’s worked at Peace of Mind Consignments. He loves speaking in front of a crowd. In fact, according to his dad, sometimes you have to nudge him to hurry up when he gets too long-winded saying the blessing before a meal.

“He can do anything just about anyone else can do,” Matt said. “It might take a little longer, and you might have to keep him focused, but he can do it.”

He loves doting on his sisters. He loves knowing what’s going on.

Angie and Matt try to make sure Zach doesn’t steal, unkwowingly, of course, his sisters’ limelight.

His parents wrote down why they love Zach when he was younger.

In part, Angie wrote: I love that I can look at him daily and see what wonderful miracles God creates… I love Zach because of the way that he loves life. I love the way he gets so much happiness from the simplest things. I love Zach for the look in his eye when he realizes he has done something new, or for the look he gets when he knows he’s done something he wasn’t supposed to.”

Ross wrote: “I love the way that he makes people smile and he doesn’t have to do or say anything at all. I love the way when he laughs, everyone in the room gets tickled, too. I love that to Zach, he has no handicpa or disability. His world is completely norman to him and he is a very happy person.”

Until the third grade, Angie said they felt helpless. She remembers a meeting at school, with Zach’s parents and 16 school officials. “People are talking about all of these things and you feel like the whole world is against you. They’re trying to talk to you about what you need and what you don’t need. At the end of the day, I would cry and cry and cry because I didn’t know what to do.”

She encourages parents who may be going through similar situations to study the student handbook.

Angie is also worried that Davie’s exceptional program will be the victim of budget cuts, including cutting teaching assistants. Teachers focus on the curriculum, while assistants focus on the students, she said.

“Zach got to go on regular field trips because they had enough teacher assistants. We were very blessed.

“Right now, Davie has the best program, but it’s falling apart because of the lack of budget,” Angie said. “I fear for what’s coming next for the students behind him.”