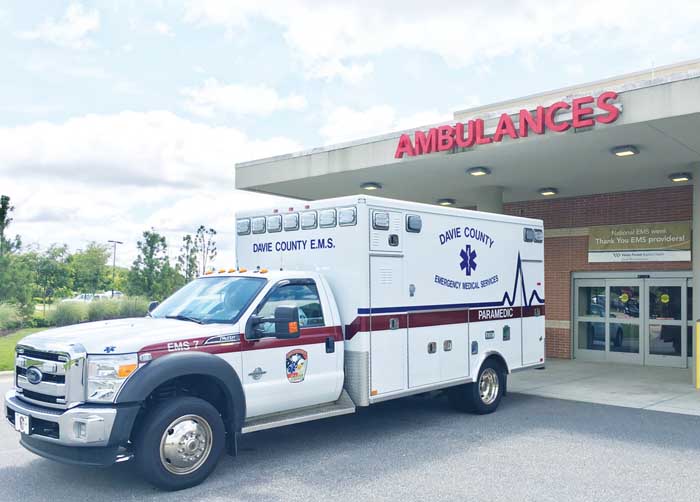 From the Wake Forest

It happens in the blink of an eye.

One minute you’re fine. The next, you require emergency medical services.

In many cases, survival comes down to the first responders who operate under unthinkable pressure and must act fast to save your life.

From May 21- 27, communities across America commemorate Emergency Medical Services (EMS) Week. This year, Davie County EMS teams have another reason to celebrate.

They received the Gold Plus level of the Mission: Lifeline award from the American Heart Association (AHA), showcasing EMS excellence in cardiac care. Gold Plus recipients must have treated several patients who experienced a type of heart attack known as ST-elevation myocardial infarction (STEMI) in the previous calendar year and previously won two consecutive silver awards.

“It is a measure of how well we perform cardiac care,” said Davie County EMS Director Brian Byrd. “This recognition comes down to folks who are dedicated to being really good at this job.”

Beyond the lights and sirens, success stories tug at heartstrings and serve as cautionary tales. Last summer, Davie EMS responded to a call about a teenager at the bottom of a pool.

“When we saw the condition of this young man, we were sure it would not be a good outcome,” Byrd said. “EMS performed CPR and the patient had to be intubated on scene – we transferred him to the emergency department, and when he was discharged a few days later, his vital signs were stable.”

“Out here you better have your skills ready, and all of the people we work with do,” said Byrd. “I’m very proud of our medical director, Dr. Darrell Nelson, who is an emergency medicine physician at Wake Forest Baptist Medical Center.”

Under Nelson’s leadership, cardiac survival percentages have increased and Davie EMS personnel shared their pit crew approach with other counties to help increase their survival rates.

“We are so privileged to have access to the state-of-the-art emergency department at Wake Forest Baptist Health-Davie Medical Center right here in our community,” said Byrd. “Dr. Matt Cline, medical director of the Emergency Department (ED) and ED Nurse Manager Beth Stanley work very closely with EMS when we have a critical patient.”

Cline says it is more than just getting patients to the ED. Often, patients require additional treatment. That continuum of care must be maintained between locations.

“We are very fortunate to be working with Brian and Davie County EMS because when the sickest of patients call 911, the first people on the scene are his EMS crews,” said Cline. “The pressure Brian’s team works under and the quality of care they provide … they literally have minutes to execute on treatment decisions.”

Diagnosing a patient on the scene saves time. As Amy Craver, heart and vascular center outreach and RACE coordinator for Wake Forest Baptist says, time is muscle when it comes to a heart attack.

“The longer the heart is without rhythm and blood flow the weaker the heart gets. So, the faster EMS responders begin CPR and restore heart rhythm, the higher the chance the patient will survive,” said Craver, who is excited for Davie EMS to receive the Gold Plus-level AHA award.  She has witnessed patients reunited with the EMS personnel who saved them.

“I’ve heard patients say, ‘Thank you for giving me the opportunity to walk my daughter down the aisle and giving me a second chance’,” said Craver.

Byrd’s team receives letters of appreciation throughout the year. During EMS Week, the ED staff at Davie Medical Center provides breakfast each morning, which is a time where the EMS crews can grab something to go as they move on to the next emergency. They also offer ice cream and hotdogs at times throughout the week.

Stanley says when Davie Medical Center opened in 2013, Davie EMS reached out and the relationship has blossomed into a support system that ultimately benefits patients.

“Davie County EMS is constantly seeking ways to provide better on-scene care. They have worked extremely hard to educate the community and develop ways toward our common goal,” said Stanley. “that’s one of the best things about Davie County EMS and Davie Medical Center – a sense of community, of good people who want to do the right thing.”