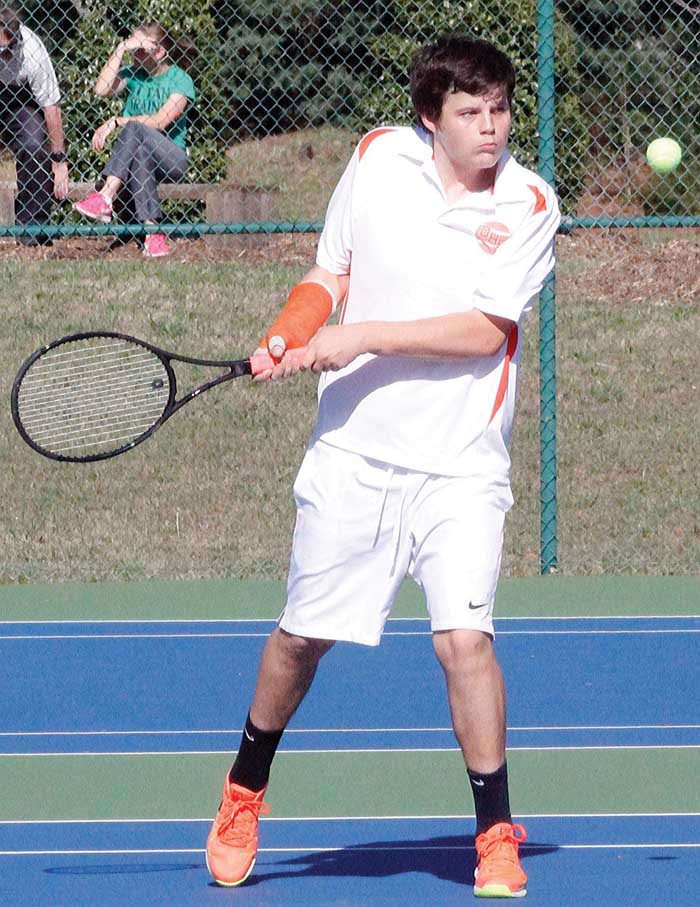 Sam Jordan returns a shot for the War Eagles.

The long wait for a regular-season championship in Davie boys tennis is over. The War Eagles buried the memory of finishing fourth, fourth and fifth in the Central Piedmont Conference between 2014-16.

Davie is No. 1 after going 11-1 in the CPC. Mt. Tabor is 7-2 with three matches remaining. Everybody else has at least three losses.

“In many ways this has been the kind of season you can only dream of,” third-year coach Shane Nixon said. “And yet here it is and it is real. I am very fortunate to get to coach such a wonderful group of young men. I love these guys.”

Davie’s ride to the top saw a string of amazingly gutty victories. It faced nine down-to-the-wire matches that ended 5-4 or 6-3. Davie won eight of them.

“That’s because we do conditioning every day in practice,” Nixon said. “In the end, we’re going to be physically and mentally tougher than the other team. That’s where we’re different this year. The purpose of (the conditioning) is to teach our guys to play tired. And it’s worked like a charm. When we get to doubles, we’re not as tired as the other team.”

The War Eagles answered their only loss – 5-4 to Reynolds – with authority, beating visiting West Forsyth 7-2 on April 4. The first meeting on March 8 was 6-3.

“For all the drama we’ve had, this one was done from the outset,” Nixon said. “We jumped on them and it was over after singles.”

“It was probably Fouts’ best match of the year,” he said. “He made a really good player look bad.”

Davie padded the margin with doubles wins from Gregory/Jordan (8-0) and Wyatte Copeland/Ben Marklin (8-3). At No. 3, freshmen Sammy Rosenquist and Mike Werbeck saw the first action of their young careers.

“This is as well as we’ve played all year,” he said. “Coming right after our only loss, this really feels good. West owned us last year, so turning the tables on them is a big deal.”

Davie vs. Mt. Tabor in Mocksville on April 6 was a dream matchup. Davie had a chance to lock up sole possession of first. Tabor had a chance to put the teams in a first-place tie.

With the pressure on, Davie was magnificent, winning 6-3. When the teams met on March 20, it was 3-3 after singles and Davie had to have doubles wins from Jack Messick/Froelich and Gregory/Jordan to prevail 5-4. Before this year, Davie had a six-match losing streak to the Spartans.

“What a night,” Nixon said. “So many things to be thankful for. So many people who helped us get where we wanted to be. So many things accomplished. What can you say about (being regular-season champion)? Tennis isn’t necessarily thought of as ‘our sport’ in Davie County. The CPC is a tough place to compete in tennis. To win the league title outright is just phenomenal.”

On top of that, Gregory bagged his 100th career win counting singles and doubles. What makes the extraordinary feat all the more impressive is 89 of the 100 came at No. 1 singles or No. 1 doubles. Afterward, Nixon presented a plaque to Gregory.

“For somebody to win a hundred matches is almost impossible,” he said. “Elijah actually got a little emotional. I think it really meant something to him. There simply aren’t enough superlatives. He is the best tennis player in the history of the school. It has been an honor to coach him.”

And Fleming couldn’t have started any worse in this one.

“He got off to a terrible start,” Nixon said. “Before you know it, it was 3-0. Ben has been a slow starter all year. It takes him three or four games to get going.”

Fleming wouldn’t be denied. He completely flipped the script in the second set, then survived the nerve-wracking tiebreaker.

“We had a conversation,” Nixon said. “I said: ‘Ben, you’re better than this guy. We both know you are.’ I was very, very proud of him. He doesn’t play like a freshman anymore.”

The War Eagles only needed one win in doubles; they got two. Gregory/Jordan (8-4) and Copeland/Marklin (8-4) got it done.

“Having beaten Reagan twice, Reynolds and Tabor twice, all in the same season?” he said. “I’m not sure even we thought this was possible. Qualifying for the state team duals and likely hosting, that’s huge – just huge – for our program.”

Davie closed the CPC portion of its regular-season schedule in predictable fashion, blowing out Parkland 9-0 on the road on April 7.

“We’ve got one (regular-season) goal left to achieve,” he said. “We need to beat Statesville Christian (this) week to stay undefeated in nonconference.”

“His game is about the same as it was last year,” Nixon said. “But what’s different about him this year is he’s a better leader, a better teammate and a better kid. He understands for the team around him to be good, he’s got to do some things that are not just about winning matches. He’s got to pick other kids up when they’re down and give kids pointers on things. He really embraced that role this year.”

Jordan went 9-4 last year, but it was down on the ladder. While playing mostly No. 2 this year, and playing the bulk of the season with a cast on his right arm, he’s 9-5. And in doubles, Jordan and Gregory are 12-2.

“When you consider Sam played all year, except for two matches, with a cast, you start to understand what he’s done with himself,” Nixon said. “He is a remarkable story. His game has gotten 100-percent better, his serve in particular. He worked hard last summer at Bermuda Run. At the first of the year, I didn’t know if he was ready to play at No. 2, but I was wrong about that.”

“It’s all mental,” Nixon said. “The Parker Froelich of old folded when he hit a bad shot, when he double faulted or when the other guy got one back that he didn’t think he was going to get back. The Parker Froelich that we have now doesn’t fold when that happens.”

“His record won’t look like he’s had a great year, but he really has,” Nixon said. “He has battled every single three or four seed as hard as he can. A lot of times that stretches a guy who has to turn around and play doubles, and it really makes a difference for us in the long run. Fouts is steady. He’s never going to be flashy, but he’s played really, really well.”=

Baseball scratches out win in 8th