Millers enjoying life on the farm 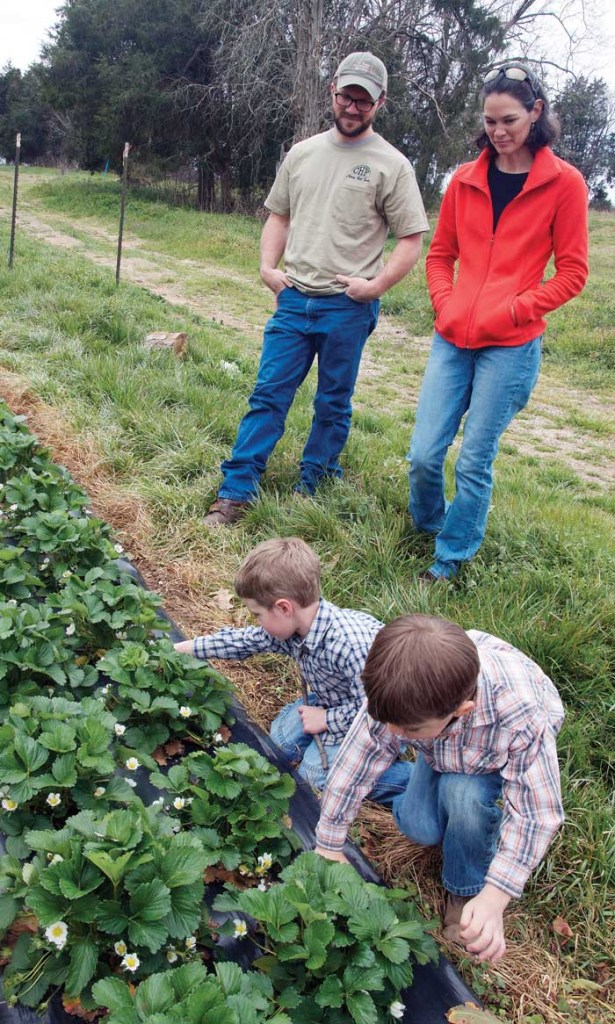 The Millers tend to the strawberry plants.

After a few years of growing row crops and grains, Justin and Holly Miller decided they needed something new to make their Cherry Hill Farm more successful.

Enter strawberries. And eggplant. And spaghetti squash. And Swiss chard. And kohlrabi. And potatoes. And carrots. And onions. And beets. And tomatoes. A lot of tomatoes.

The Millers have gone all out planting vegetables, selling to wholesale markets, at farmer’s markets, a roadside stand and through their own CSA (Community Supported Agriculture), in which people pay to have fresh vegetables.

And with two small children at home, the couple stays busy.

Justin works a full-time job, and comes home and spends several hours working on the farm just about every day. Saturdays are normally 12-hour days. Holly is busy working with customers, tending to the children, selling at markets and keeping up with everything a farm requires.

They’re also trying to fix an historic farmhouse on the property.

“We’ve got farming in our blood,” she said. “We love it. I always wanted my kids to grow up on a farm. It teaches values that people who don’t grow up on a farm don’t understand. We appreciate the simple things in life.”

The Millers grow all of their vegetables from seed in a greenhouse at their Advance home. It gets planted at a family farm on Cherry Hill Road in southern Davie County.

The strawberries have been a big hit. She couldn’t keep them in stock at the Mocksville and Peachtree farmer’s markets. And while the March freeze took some of the crop, they expect plenty of strawberries to be ready by mid- to late-April. They also offer pick-your-own at the farm, where 8,000 plants are filled with young, green fruit.

The family isn’t centered on social media, and at an Extension farm school, she was told for the farm to be more successful, she needed a Facebook page. She opened one, and sales and interest increased.

Interested in the strawberries? Check out the Cherry Hill Farm Facebook page for details and when they will be available, and when the farm will be open.

Last year, more than 3,600 tomato plants went in the ground at Cherry Hill Farm. A farmer has to wear many hats, and Justin made a “setter” to help put the plants in the ground more efficiently. They grow mostly heirloom varieties, with Cherokee Purple being the most popular.

April will be busy, weaning greenhouse plants for setting in the ground, putting the plants in the ground and at the same time, harvesting and selling strawberries.

“We’re really busy in the spring and early summer,” he said.

“I’ve always known I wanted to work outside and grow stuff,” Justin said, “but I wasn’t sure what path to take.”

He sold his landscaping business when he took the plunge into farming for his side job.

Holly describes their philosophy as “faith, family and farming.”

“If you’re a worrier, you can’t be a farmer, especially produce farmer.” There’s the unpredictable weather, pests, diseases.

She enjoys talking to customers, and seeing what they want. She had never eaten spaghetti squash, but they planted it anyway. “It was a big hit.”

“It’s pretty cool, just seeing something from start to finish,” she said. “It never ceases to amaze me.”

Like home gardeners, they have the same opinion of that first, juicy tomato. “That first one is always the best. By July, when it’s 2,000 degrees outside, I wonder what I’m doing.”

Justin is the fifth generation to work the family farm. The house dates back to 1854, built by Mathias Miller. His father, David Miller, grew up in the house. Justin’s grandfather was John Albert Miller.

“Farming is a hard way to make a living, but we enjoy it,” Holly said. “We just keep on going on.”

Davie EMS among the best