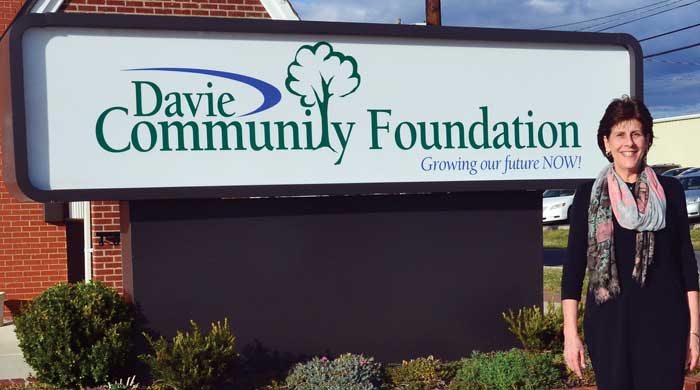 George Martin got it all started with a gift of $500.

Now, the Davie Community Foundation manages some 270 endowment funds. Many go to scholarships, but the causes are as varied as the benefactors.

All it takes is $5,000, and yearly awards can be given. It’s up to the benefactor. One couple left money for a church graveyard fund.

Jane Simpson has been president for the past 14 of the foundation’s 29-year history, seeing investments in the community grow to more than $11 million by the end of February.

She has seen the growth into women’s giving, and youth philanthropy. The growth of an unrestricted fund not only pays for office staff, it has led to initiatives to improve the health of Davie residents, to help struggling young learners – to help children in general.

The foundation, based on Salisbury Street in Mocksville, recently purchased a building beside the main office. Simpson quickly rattles off possible uses for the building, most of which would cater to young people.

She envisions a forge, where teens can make things. Three-D printers could create interest. She envisions a children’s museum, possibly focused on science. She envisions a place where people can go to learn how to start their own business, maybe even a place to work from until it gets off the ground.

The possibilities are endless, and Simpson said she is excited to work in cooperation with local agencies already providing services, and the new county recreation and parks department, which is deciding what to do with the current Davie High School campus.

Just a place where teens could work – and learn how to be a good employee – would be a tremendous benefit, Simpson said. Teens, even some of the brightest, need extra help to learn how to be in the business world. Things like addressing an envelope aren’t taught in school any more, but it’s a valuable tool when these teens want to contact someone seeking money for a project.

“How do you teach kids work ethics? There’s no place here for them to work,” Simpson said.

The foundation regularly studies community needs, and foundation wants to use its new space to provide for those  needs.

She has seen young families go to Yadkin County for classes, to Winston-Salem to go to a museum.

The new space includes a bit of open space. Could they grow a garden and then teach cooking skills in the building?

The committee making the recommendation to the foundation board on the use of the new space includes folks from across the county, and all walks of life, Simpson said. “I want us to be realistic.”

When she started at the foundation in 2003, there was some concern there wasn’t enough undesignated money just to pay her salary. A permanent operating endowment changed that.

“If I die tomorrow, that money is still going to be here,” she said. “I like the idea of having money just for Davie County.”

A greenhorn, she wasn’t sure what to do in her new job. She immersed herself in all things foundation, even attending classes to learn how to do the job.

And like her education in a foundation and endowments, she’s now teaching others the meaning of the terms.

“I ask people, ‘What do you care about? This will go on forever. The people who set up the funds have the say.”

The scholarship program grew quickly. The foundation manages endowments that give away some $157,000 annually to deserving Davie students.

Like the private Mebane Foundation, the Davie Community Foundation has been instrumental in providing funds to help Davie’s young students stay in grade level in reading.

One of those summer reading camps funded by the foundation included a trip to a Winston-Salem Dash baseball game. The foundation made sure that every child got a baseball cap and some ballpark food. That decision couldn’t have been made without an unrestricted fund, and it worked. The kids beamed with their new caps, she said.

The foundation even paid for the bus that picked up children for the summer camp. “You do it because you need to,” she said.

That unrestricted fund (The foundation is in the midst of a 5 In 5 campaign to raise $5 million.) is important, because board members can choose to put their efforts into what’s needed at that time. “Needs change and you need the ability to change with those needs.”

Imagination Library provides free books to pre-schoolers, sent to their homes. Every child who signs up gets a book regularly, no matter where they live in Davie County.

Teachers receive support, and the foundation sent teachers on a retreat to talk about how to incorporate more STEM (Science, Technology, Engineering and Math), into everyday lessons.

The foundation provided blankets and pajamas to A Storehouse for Jesus.

The foundation spearheaded the Healthy Davie Initiative to get Davie residents to walk a billion steps in 100 days. The goal is to get people into the habit of exercising regulary, making them more healthy.

“There’s still so many things that need to be done,” Simpson said.

She’s proud of the Pearls of Empowerment, a women’s giving group, started at the foundation. She’s equally proud of the youth philanthropy group, the SURF board.

The Pearls – some 400 women strong – have regular meetings, and focus their attention on youth and family programs.

The SURF board was an eye opener.

She had been a volunteer in schools and liked the idea of getting young people involved in philanthropy. They hold their own events, such as the recent Popsicle Run, to raise money, and decide which youth-driven projects will receive grants. She watches the teens as they interview each other on board membership and on grant applications.

“I don’t say a word. I just listen. They weed out the ones who just want it on their resume and the ones whose mother made them do it,” she said.

In other words, the teens want to be involved with other teens who share their commitment to make the lives of their peers better. “I feel energized after I leave their meetings,” Simpson said.

The foundation has come a long way since that first $500 gift from George Martin, who was on the founding board along with John Brock, Peter Hairston, Bert Bahnson, Kent Mathewson and R.C. Smith.

Mathewson was the first president, followed by Ken Dwiggins.