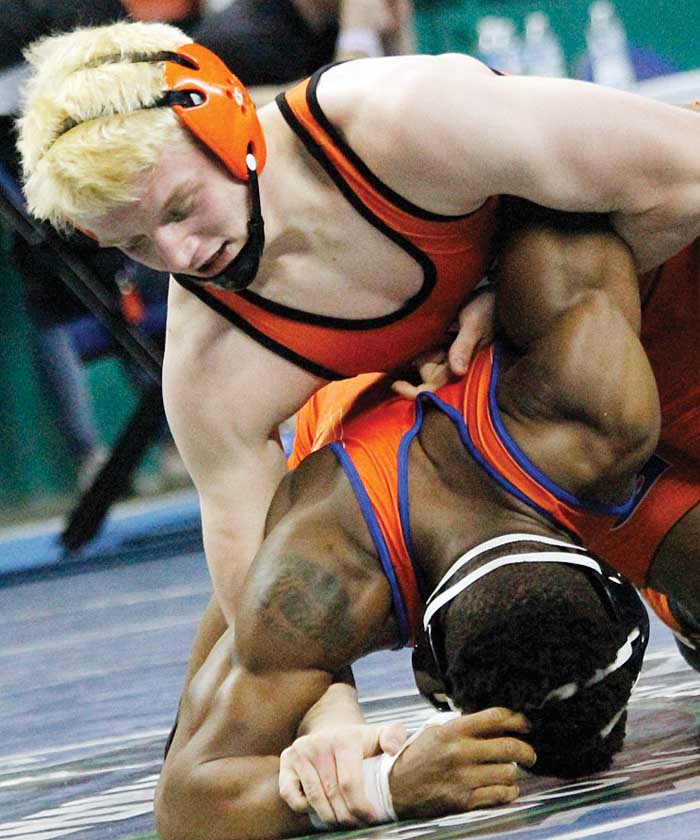 Will Allen wrestles at 138.

Four Davie wrestlers distinguished themselves by placing in the state tournament, and the War Eagles closed the season with their best state showing (eighth place) in six years.

The state individual championships were held at the Greensboro Coliseum from Feb. 16-18.

Davie did decidedly better than last year, when it finished 20th.

“There were some good battles,” coach Buddy Lowery said. “It was a fun group to be around. It’s a group of kids that know how to act. They’re not going to get in any trouble or anything like that. It was a fun year.”

Senior Hunter Smith’s fourth-place finish at 113 surprised nobody. That he reached the consolation finals after losing in the first round was quite an accomplishment. He suffered a 5-4 loss to Wake Forest’s Joey Hannum in the first round, but he refused to roll over, winning the next four matches: first-period pin, 10-2 major decision, first-period pin and a 2-0 revenge decision over Hannum. In the third-fourth match, he was barely beaten, 8-6, in the sudden-death takedown period by Southwest Guilford’s Andrew Chu.

Smith, who went 2-2 in the state meet as a junior, went 4-2 to cap a decorated career. “After that (first-round loss), he wrestled hard and beat the guy that beat him in the first round,” Lowery said. “He had a good career.”

After getting nipped 5-4 in the first round by South View’s Cade Smith, who entered with a 46-2 record, J. Olmedo ripped off four wins to reach the consolation finals: 13-7 decision, 10-8 decision, pin and 2-1 decision over Mooresville’s Alex Teeter. In the battle for third, South View’s Smith defeated Jesus again, this time 7-2.

A. Olmedo turned in the team’s hottest start, opening with back-to-back pins. In the second round, he stuck Harding’s Jo Vaughn Gwyn with one second left in the third period. But A. Olmedo lost 3-1 in sudden death to Southern Alamance’s Alex Crawford. After winning his next match 3-2, Vaughn Gwyn got his revenge on A. Olmedo, pinning him in the match for third.

“They’re great kids,” Lowery said of the twins. “They’ve got bright futures. (The upper weights) are a hard place for underclassmen. You don’t get freshmen and sophomores (placing) many times. But both of them were disappointed.”

“I think both of them wanted to be equal to what their brother did,” Lowery said. Isaiah Olmedo finished third at 182 last year. “Hey, you’ve got to forget about that. (Isaiah) was talking a little bit of smack to them. I said: ‘What did you get your sophomore year?’ He said: ‘I might have gotten four varsity matches.’” For the record, Isaiah went 13-6 as a sophomore. He broke out as a junior and set a single-season record with 59 wins as a senior.

The other War Eagle to place was senior Kyle McCune, who took sixth at 170. He bounced back from a 6-3 first-round loss, winning three straight, including a 1-0 decision over Mallard Creek’s Josh Gilliem and an 18-10 major decision. However, he lost to Cary and Northwest Guilford in his final two matches.

“He wrestled as well as I’ve seen him wrestle in a while,” Lowery said. “He was aggressive.”

Senior Will Allen (138) opened with a 9-4 win, but things went downhill after that, losing 4-3 to Holly Springs’ Hunter Morton and 7-2 to Glenn’s Jamal Brannon.

Senior Jesse Carter came out of the blocks with a pin at 195. But like Allen, he couldn’t sustain it, losing a 12-7 decision and getting pinned in his final match. But after being average during his sophomore and junior years on varsity, Carter became a stalwart as a senior, going 52-8 to tie for 10th in season wins. He also put himself among the 20 50-win seasons. His career record was 108-50.

“You talk about one that improved,” Lowery said. “You couldn’t ask for anything more from him in his senior year. I’d like for him to have (placed), but sometimes you just get in the wrong bracket.”

The eight-place finish was Davie’s best effort since it placed third in 2011, when Waters and Matt Cusack were champs at 125 and 171, respectively. Also in ‘11, Tony Donati finished fifth at 135, Trevor Albarron sixth at 103, Alex Costner sixth at 112. Toby Lowe (189) and Trevon Faulkner (152) were also state qualifiers that year.