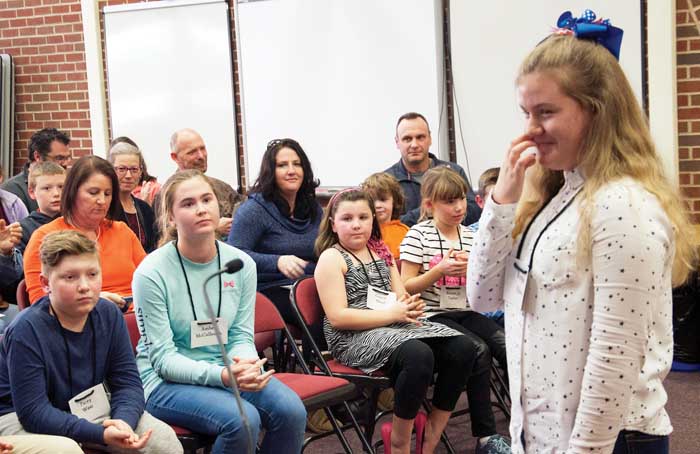 Participants in the annual Davie County Schools Spelling Bee squared off against each other at Central Davie Jan. 31, vying for the opportunity to compete in the Regional Spelling Bee in Winston-Salem in March.

After only a few rounds, Raegan Edson, a student at South Davie, won by correctly spelling the word “promulgate.”

The Bee began with the introductions of sponsors and school winners from bees held at all the elementary and middle schools.

Round one of the competition saw the elimination of Copeland, when he incorrectly spelled “aspen.” Four participants, Dequenne, Shoaf, Bliss, and Taylor, went out in round two, and in round three, West was eliminated.

When Vick incorrectly spelled “Holocaust” in round four, it was down to Edson and McCullough. They each spelled their two words correctly, Edson spelled her next work correctly, but McCullough misspelled “pirouetted,” leaving Edson to spell promulgate for the win.

Edson was awarded a $250 gift card, courtesy of Venezia Italian Family Restaurant, McCullough received a $150 gift card, donated by the Davie County Enterprise Record, and Vick’s third place got him a $100 gift card from BB&T.

Judges were Allison Fender, Sara Holbert, and Beth Keville. Round judge was Kathy Crews, and facilitator was Danny Cartner.

Woman to appear in Wheel of Fortune