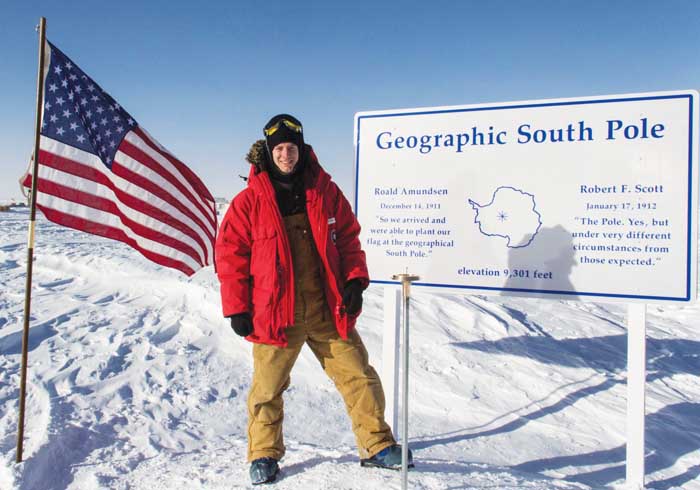 Some people may climb into their car and head up the interstate to work on a daily basis. Others may take a bus or walk to their office and desk jobs.

But not Lt. Joseph Phillips.

His job takes him to all areas of the world and, depending on the situation, his office could be on land, sea, or in the air.

Phillips graduated from Davie High in 2005 and went to UNC-Asheville for his undergraduate degree in atmospheric sciences, graduating in 2009. His studies focused on learning how to forecast the weather, and his intention was to be a weather forecaster, but after an internship with a forecaster at WXII, Phillips’ plans changed.

“I found out I didn’t like that style. It was too weird to talk to a box,” he said.

After the internship and still in college, Phillips did hurricane research in Florida and then got a job with the Navy doing long-range weather forecasting. It was during that time he realized whatever his job was, it had to be outside.

“So I looked for and found a job that offered adventure and the outdoors,” he said of his job in the NOAA Corps. The NOAA (National Oceanic and Atmospheric Administration) Corps is one of the nation’s seven uniformed services. The Corps works to support nearly all of NOAA’s programs, and its officers, schooled in engineering, earth sciences, oceanography, meteorology, and fisheries science operate NOAA’s ships, fly aircraft, conduct diving operations and serve in other positions.

Officers are paid and achieve rank the same as on other military branches but do not carry firearms. Phillips said the focus is on commerce and science, not war.

Fresh out of training, Phillips’ first job was as an oil observer in the Deepwater Horizon spill that began April 20, 2010 in the Gulf of Mexico.

“My job was running helicopter operations to hunt down the oil. I scheduled all the helicopters that were flying, and I was in the helicopters looking for the oil. For the first job outside training, it was really cool to be part of,” he said.

He was still there when the well was capped but left soon after for his next assignment on a ship in Alaska, “hanging out in the Pacific Northwest mapping the bottom of the sea floor to look for hazards for ships and boats.”

Phillips piloted the boat and also did the surveying. When asked the size of the boat, he laughed and said, “It’s bigger than any boat you will see in Davie County.”

The one he was on in Alaska was about 230 feet long. That assignment lasted over two years.

He spent a year in Antarctica, as station chief of the observatory at the South Pole, and he had to trek back and forth outside to the lab every day, upwind.

“Sometimes I couldn’t see 10 feet in front of me. We’d have to put up flags to be able to see to get from one place to another,” he said.

Famous for its bone-chilling temperatures, Antarctica’s coldest temperature he can remember while there was -105 degrees with a wind chill of -160. But it remains Phillips’ favorite assignment, and not just because he met his girlfriend there.

“Antarctica is a place everybody in the world agrees needs to be protected, so there are no cities, no oil exploration…you see nature at its best, whales, birds, penguins. It is a region as pristine as you can see on the whole Earth. I live right outside Washington, DC now and everywhere I look, I see people overusing resources, taking advantage of the planet, destroying it.”

Phillips said if he ever had the opportunity go back to Antarctica, he would.

Other assignments have included piloting research ships on the west coast, tropical Pacific, and the east coast that focused on oceanography, hydrography or climate research. He flew into Hurricane Matthew last year, helping forecasters determine the strength and path of the storm.

For the next two years, Phillips will work for the National Weather Service, before his work will take him aboard the NOAA ship Ronald H. Brown, a 274-foot vessel with a home port in Charleston, S.C. He will be the operations manager. The ship has traveled to the Atlantic, Pacific and Indian Oceans, and Phillips said he isn’t sure where he might end up, but he is looking forward to the adventure.

“I have a passion for research and travel. There are only two continents I haven’t been to, South America and Africa, but wherever I am, honestly, I am just happy being out on the water.”

Phillips’ dad, Ed, retired from the Navy in the late 90s, and he and Phillips’ mom, Patti, live in the Center community. Phillips has a brother in the Army, an older sister in New Zealand, and his older brother lives in Colorado.

Thinking back to his high school years, he remembers some teachers who made an impression on him, Regina London and Jeremy Byrd, among others, and his football coach, John Bullins. “Without them, I probably wouldn’t have gotten to where I am today,” he said.

He admits he still has a hard time believing how fortunate he is to be working in a field he loves and believes in.

“I am definitely living my dream right now. My advice to anyone who is considering what they might do for a living, I would say to follow your dream and don’t think you can’t do something. And most importantly, don’t be afraid to step outside your comfort zone.”