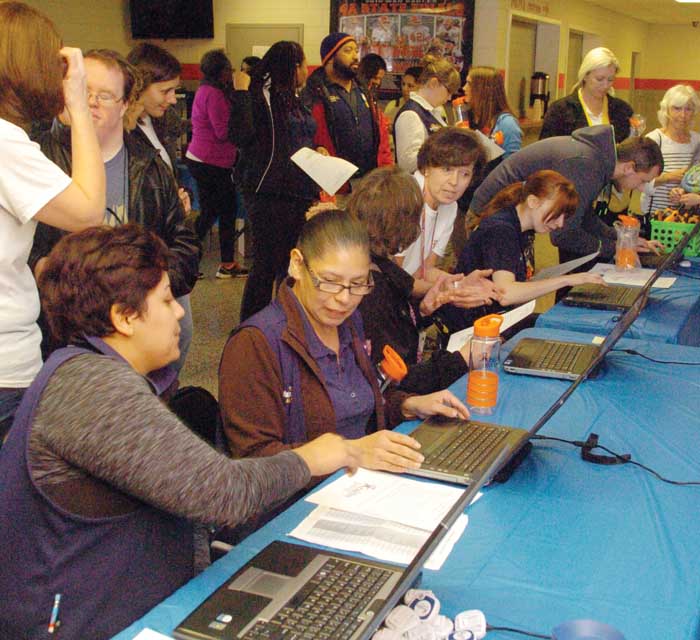 Folks register to take part in the Healthy Davie Challenge.

From Cooleemee to Bermuda Run, folks are walking.

They may park at the end of a parking lot before going into a store. They may take advantage of sidewalks and trails.

That’s exactly what the Davie Community Foundation and Mebane Charitable Foundation leaders envisioned when they came up with the Healthy Davie Challenge – to collectively walk a billion steps in 100 days.

A kick-off celebration was held Saturday at Davie High School, where folks not only walked, but learned of community health resources and took advantage of free health checks from Baptist and Novant.

“Hopefully, today is the first step in many, many steps,” said Larry Colbourne, Meband foundation president.

The initiative grew from the wellness group of the Healthy Davie Initiative, seeking the greatest needs in Davie County. The results were: education, poverty and health.

Jane Simpson, community foundation president, said that while walking is being encouraged, running counts, as does riding a bicycle or swimming. You don’t have to wear a pedometer. There are conversion charts that can relate just about any exercise or walking distance into comparable steps.

The walking is nothing new for Cooleemee Mayor Steve Corriher, who started inviting town residents to walk with him soon after being elected. It gave them a chance to get to know one another as well as talk about town concerns while getting healthier with exercise.

At Saturday’s event, he said he hopes Cooleemee and the rest of Davie’s residents learn new ways to have healthier diets.

Bermuda Run Mayor Ken Rethmeier said it’s important to be screened for cholesterol, weight and blood pressure. Having those bases makes it easier – and more rewarding – to see improvements. “I am truly excited about this opportunity for our communities,” Rethmeier said.

County Manager John Eller, just over a week into the job, said the initiative is a good way to bring the county together. “It’s going to take all of us to meet this challenge,” he said.

Dr. Joey Skelton, Wake Forest Baptist Health pediatrician, said regular exercise, like many things in life, is based on routine.

Skelton said to make fitness goals that can be accomplished.

Tim Devericks, Davie High football coach who led the ceremonial first lap around the school’s track, said it was cool to see people of all ages ready to walk more.

It’s easy to say get out and walk, but children are impressionable. “If a grandchild or child sees you walking to get healthy, that’s going to sink in. I encourage you to develop a routine.”