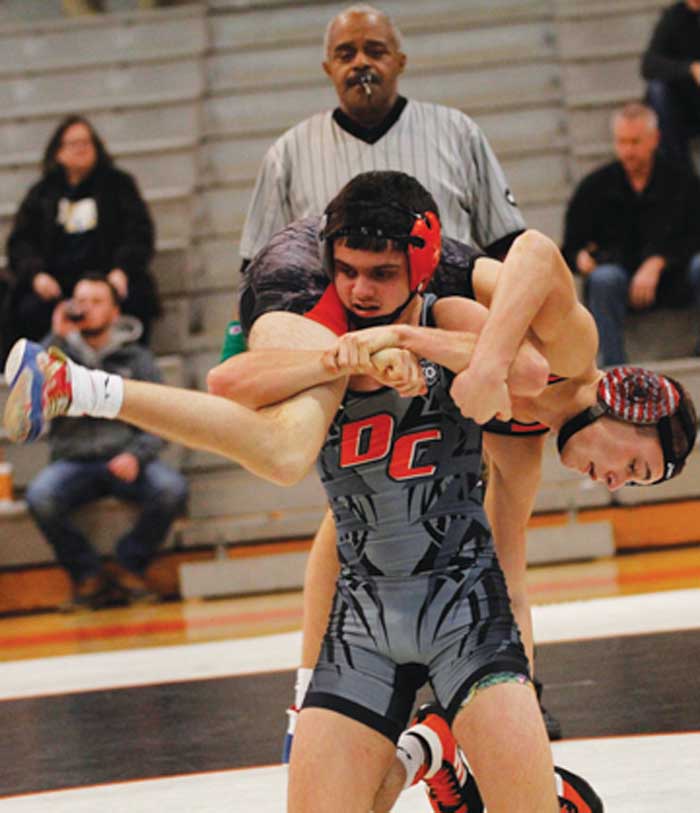 Tommy Trader lifts his opponent during a dominant win.

If you had predicted that Davie’s wrestling team would produce no first-place finishers and still win the 26-team Sarah Wilkes Invitational tournament on Jan. 13-14, most folks would have said no way.

But coach Buddy Lowery’s War Eagles proved their immense depth, delivered one amazing consolation performance after another and sneaked away with the trophy.

But what a team effort it was. Twelve of 14 War Eagles placed in the top six. And they came home with plenty of souvenirs in the form of bumps, bruises and gashes.

“Anthony (Olmedo) got his lip busted,” Lowery said. “He might need stitches. He has scratches all over his legs. Jesus’ face looks like a piece of hamburger. Jesse (Carter) has an eye like Austin Smith did. Crayton Wise might have broken his nose again. Even in the consolations, it was battles. You talk about a total team effort.”

Even the coach wasn’t immune to the aches and pains.

“I got cramps in my legs from jumping up and down,” Lowery said. “I guess I wasn’t drinking enough water. I got a cramp in the front of my thigh. I’d get it about halfway out and I’d get a cramp in the back of my leg.”

Bryson Hunter, a junior at 182, did something pretty awesome, winning the tournament award for most pins in the least amount of time. He racked up four in less than 10 minutes.

The War Eagles are 28-1 in dual-team matches. This was their third individual tournament. They were first out of 14 teams in the Old Appalachian and sixth out of 30 in the Southern Slam.