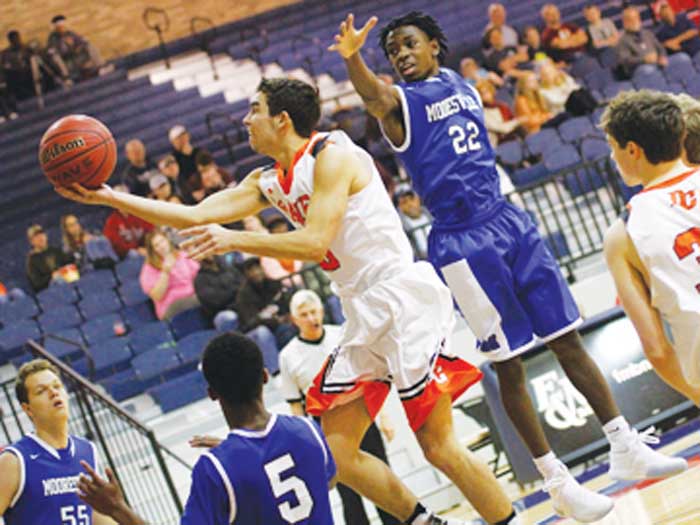 Dylan Shoffner heads to the basket.

While Tim Devericks wore the interim tag for 10 weeks, a charismatic leader was emerging right under the Davie administration’s nose.

Devericks guided Davie’s football team to a 5-1 record, the conference championship and to the 4A quarterfinals. And the interim tag was lifted Dec. 20 – Devericks’ 39th birthday. He became the 11th coach in Davie’s 61-year history.

“To be able to step into what was obviously a difficult situation, and to see his professionalism, his composure, his poise and his ability to lead through a difficult time speaks highly about him,” Davie athletic director Mike Absher said. “You hear a lot of people say what a great coach he is, but he’s an even better person. He took that situation and not just handled it. He seemed to thrive in it.

“We just felt like that moving forward it was the best thing for our program. He obviously kept the guys focussed and kept the coaching staff focussed on the task at hand.”

Davie finished 12-2. The only losses were to Dudley, which captured the 4A title with ease. The Panthers’ 54-30 win over Davie in the quarterfinals might have been their toughest test en route to the championship as Davie led 30-22 and was threatening to take a two-score lead in the third quarter. Davie beat Page by 10 and the Pirates finished as 4AA runner-up.

“Being a head coach has always been a career goal of mine,” Devericks said. “I am super excited for myself and for the other coaches on the staff. This has been a trying year and those kind of things. So for this to come about this way has just been really awesome.”

Absher appreciates what DeVore Holman did for the ‘16 team and what he has meant to Davie football for many, many years. The 1984 Davie graduate was an assistant for 20-plus years before replacing Doug Illing as head coach for the 2013 season. Holman’s War Eagles were 7-1 when he resigned for personal reasons on Oct. 12.

“We are extremely thankful to coach Holman for all the hard work he’s done in his time as our head coach,” Absher said. “The success of this season didn’t just start on Aug. 1. It started last spring and coach Holman was obviously a very important piece to that. He was the guy in charge and we were just really fortunate to have him during that time.”

Davie quarterback Chris Reynolds was an absolute joy to watch for two years, and making the 2016 Shrine Bowl of the Carolinas was a fitting conclusion to a magnificent two-year run.

He was not on the original North Carolina roster, but on Dec. 12 he was added to the 80th-annual game as a replacement player. State championship games were pushed back a week to allow schools affected by Hurricane Matthew to complete regular seasons. That meant eight players in state-championship games were unable to participate in the Shrine Bowl, including quarterbacks Will Jones of Page and Hendon Hooker of Dudley.

The Tar Heels had a spot open for a QB, and Reynolds jumped at the opportunity.

“They started going through their evaluations from summer camps,” Devericks said. “Chris was in coach (Bobby) Byerly’s class. I went to talk to him and he slapped my hand so hard that it went numb. He was pumped. The best thing about it is a bunch of football players were in there and they were pumped for him. I mean that’s how much those kids care about each other.”

The Dec. 17 game at Wofford College in Spartanburg, S.C., matched the top players from North Carolina and South Carolina, and the Tar Heels rallied to a 17-10 win. The Sandlappers jumped ahead 10-0 in the first quarter and led for the first 45 minutes.

Reynolds did not get much playing time, but it was a huge honor just to wear the uniform in the oldest high-school all-star game in the country.

East Forsyth produced the most selections with five, and Davie was next with James Boyle, Hite Merrifield, Reynolds and Cooper Wall.

“First and foremost, Chris is a great person, just the ultimate teammate, always making everyone around him so much better,” Devericks told the Journal. “So when you combine those leadership skills with how hard he works on his own skill set, he was just tremendous for our team.”

“James was there when the times were low for our team, but he was determined to have a good year and not go out like that,” Devericks told the Journal. “Everyone on the defense looked up to him, and it seemed like he was able to get everyone on the right page before almost every snap.”

“Cooper has great athletic skills and great hand-eye coordination,” Devericks told the Journal. “He’s able to use some of his basketball skills to go catch the ball in the air like he’s battling for a rebound, and that makes a big difference in him coming down with so many catches.”

“Hite is a very cerebral person,” Devericks told the Journal. “If he just sees something one or two times, then he’s really able to understand. And that allows his athletic skill set to take over, which is a great thing for someone who is only a sophomore to have both sides of the game covered.”