Wrestling puts on a show 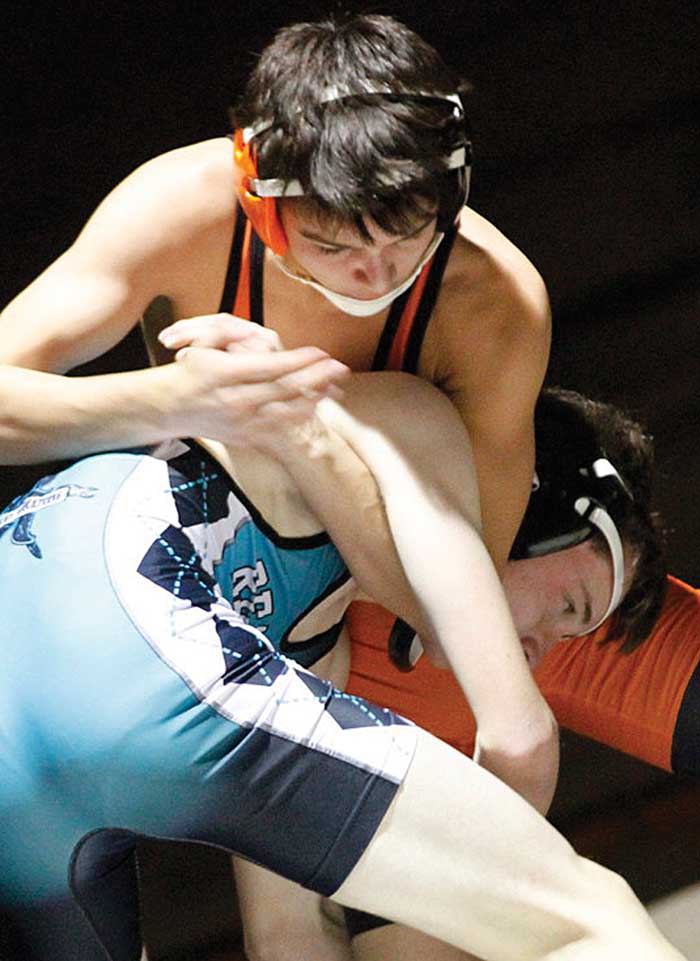 Davie’s wrestling team put on a spectacular show in the two-day Red Devil Duals at Newton-Conover, obliterating the field to push its record to 19-0.

Assistant coach Timmy Allen said Combat Athletics has worked wonders for several War Eagles. Among them is Carter, who is 25-1 on the year.

“He put in as much time at Combat Athletics and lifting as anybody I’ve ever seen,” Allen said. “(The record) is all because of his hard work.”

After hitting the mat late due to football, A. Olmedo and J. Olmedo are unbeaten with 15-0 and 14-0 marks, respectively.

“They’re still trying to catch their lungs from football,” Allen said. “Anthony has surprised me more because he looks like he’s leaned down, he’s a lot stronger and he moves a lot better. He’s not getting caught under those heavyweights as much. They’re going to be special.”

“He’s tough as nails,” Allen said. “Mentally, he tries to break his opponents every match. A lot of times he’ll get in guys’ heads and just break them. He could have a pretty special year.”

Senior Hunter Smith went 8-1 at 113. He was 22-0 when he suffered his first loss. Hunter Huss’ Keshon McLean major decisioned Smith. Other than that, Smith has been sensational. He recorded five pins in two days and left with a 25-1 mark. With 152 career wins, he’s seventh on the career list.

“(McLean) finished third last year in 3-A,” Allen said. “Hunter didn’t really wrestle his style. He kind of wrestled to that guy’s strength. He was trying to muscle and put himself in bad positions.

“He’s been tough since he got to Davie. He puts in a lot of time in wrestling.”

Sophomore Peyton Sherrill was 4-5 at 145. He’s been taking one for the team, because as Allen said, “Peyton is probably a 132-pounder and he’s wrestling up two weight classes.”

Junior Joseph Myers went 3-1 at 152. Junior Austin Smith went 3-2 at 182. Sophomore Matthew King went 2-2 at 182 in his first-ever varsity matches. Sophomore Bill Trader got a pin in his only action. Sophomore Colby Shore went 1-1 at 126. It was also the varsity debut for C. Shore.

McCune reached a milestone by eclipsing 100 career wins. He’s 22-6 on the season and 105-47 in three years in the varsity lineup.

“Kyle’s another one of those Combat guys,” Allen said. “He’s a lot stronger this year. Across the board, you can tell we’re a lot more physically developed. We finally got an older team. Kyle came across some studs (at Newton-Conover). I would say he’s wrestled the toughest guys so far.”

Wise is 21-5. “He really focussed on getting strong during the offseason,” Allen said. “He’s a coachable kid and is probably the hardest-working guy in the room. He has one of the best double legs around when he sets it up.”

Say hello to Gillis, who saw no varsity action the past two years. The under-the-radar junior has carved out an eye-opening 21-6 record.

“He’s go, go go,” Allen said. “He’s going to get that first takedown most of the most. He’s freakishly strong for his size. He’s like a hammer on top. He rides and rides. You could tell he gassed a little bit in the second period (of one match). I said: ‘Buddy, I think he’s gassed.’ Buddy said: ‘Well, he hasn’t been out of the first period all year.’ I wish he was a Combat guy. I said: ‘Nick, if you would wrestle in the offseason, you’d be a state champ next year. I mean he could be really good.”

Allen’s overtime pin against Newton-Conover was one of the season’s highlights. He’s 21-7 on the year.

“It was a technique we’ve been working on,” Allen said of the decisive move in OT. “The guy shoots a double and Will pancaked the kid right to his back. He said it just came natural. He’s starting to come into his own. He started out struggling, not finding his rhythm. He’s starting to put it all together and getting better on his feet.”

J. Shore is 20-7 on the year. “He didn’t wrestle any fish (at N-C). Those kids (who beat him) were all ranked in their respective divisions.”

Sigmon is 19-3 on the season. “He’s a hard-nosed kid,” Allen said. “He doesn’t put himself in bad positions a lot. He’s doing a good job of finishing his takedowns and being a hammer on top. He’s good at riding, working turns and working until he gets something.”

“Joseph is the strongest kid I’ve ever seen on the mat,” he said. “I don’t know if he’s country boy strong or if he lifts weights. If he locks something on you, you’re going to get pinned.”

After missing several matches with injury, Strickland boosted his profile with the 5-0 showing at N-C. He’s 9-1 on the year.

“He’s the one that’s going to surprise everybody,” Allen said. “He’s like Jesse Carter – he lived at Combat. He could place this year (in the state). I wouldn’t say he’s in shape yet. But from last year to this year, his technique has been out the roof. He probably wrestled 50-60 matches in the offseason, not to mention going to Disney. He lives at Combat with (owner Josh Stanley, who went 133-36 in his Davie career from 1998-02, including a third-place finish in the state at 135). He contests every takedown, he gets takedowns and he’s good on his feet. He’s tough with legs. He counters everything. He’s solid. Technique-wise, I’d say he’s our best wrestler.”

Notes: Although Davie has reached 19-0 with ease, it hasn’t received any love from Retro Rankings.  “We’re not ranked,” Allen said. “Nobody’s even talking about us. But when we step on the mat, nobody wants to wrestle us. Let’s just use it (as motivation) and surprise some people.” … This is the best start since 2009-10, when Davie started 30-0.