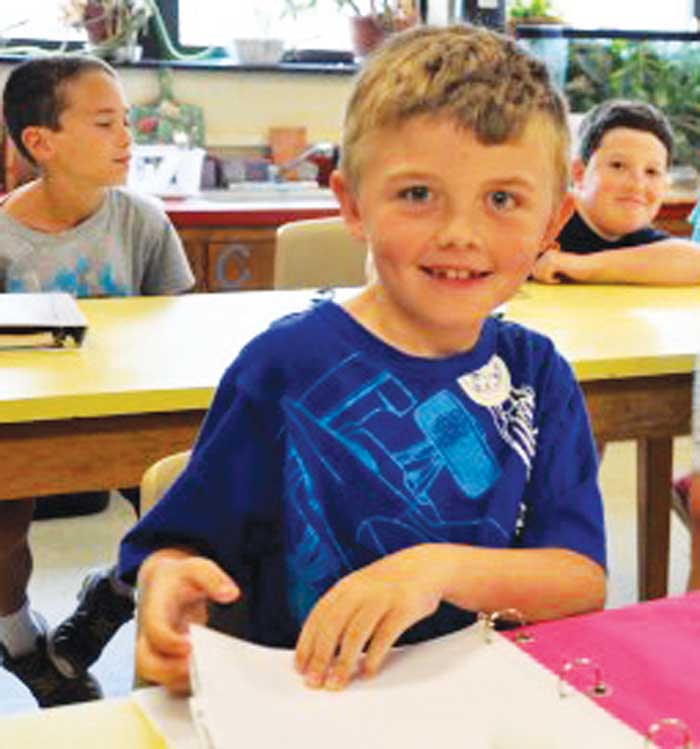 The Mebane Foundation summer camp is designed to be fun as well as help students with reading skills.

Only their smiles betray their excitement as 120 students wearing matching red camp t-shirts and Indian headbands enter the gym in quiet, single-file lines.

It’s time to celebrate all they accomplished during Davie County’s Read to Achieve 2016 summer camp.

The camp is designed to help third graders advance in reading capabilities. This year’s camp also included first and second graders who demonstrated the potential of reaching grade-level proficiency in reading with extra help in the summer, as mandated by the N.C. Department of Instruction.

As in the past two years, this year’s camp was a tremendous success. More than 27 percent of the county’s non-proficient third-graders reached the required reading achievement score to move on to fourth grade.

Additional students are expected to pass the Read to Achieve test in the months following camp; 76 percent showed positive growth on one or more reading assessments.

The third graders were not the only campers to blossom. While assessments for first and second graders were limited to a social maturity inventory, a skill development checklist, and progress checks in HillRap sessions, over 65 percent of the youngest campers demonstrated strong growth over their initial scores on formative evaluations.

“While a 27 percent success rate may not seem extraordinary to people not close to education, and more specifically the Read to Achieve program, that rate is far better than those being reported by the majority of school systems in North Carolina,” said Larry Colbourne, president, Mebane Charitable Foundation, which provided a grant of $90,000 to support the 2016 summer camp.

Since 2014, the foundation has invested more than $235,000 in partnering with Davie County Schools to fund the intensive four-week camp.

“Without the consistent support of the Mebane Charitable Foundation, the reality of the DCS Read to Achieve Camp, a launch pad for students with potential, would be only an idea and fall short of the impactful program that it has become,” said Noel Grady-Smith, executive director of curriculum and leadership development for Davie County Schools. “State funding is not sufficient to produce the model program that we have developed or to support the highly-effective teachers that are employed in Davie County Schools RTA camp.”

She attributes the success of the program to the implementation of Hill Center Reading Achievement Program (Hill RAP) sessions and A+ Schools Instruction during the summer program and school year which creates a consistent foundation for student achievement. A student teacher ratio of 8/1, working in small groups based on individual needs,  was also beneficial to the young readers.

The ongoing goal is bring these successful, research-based teaching strategies to all six elementary schools during the school year. The teachers who train and practice these approaches during the summer are spread out in schools across the county.

“I didn’t used to like to read. I just pretended that I got the words. Now we make things. Like stories, plays, songs, and drawings that help me understand. So I get it now … for real,” said Ethan, a third grade camper.

Each camper experienced 128 hours of instruction with more than 28 hours spent in individual learning sessions with three to four students in the group.

Students had computer lab time to work with a new program called myOn, which offers a reading experience tailored to a student’s level and needs. The program allowed them to build vocabulary and score points for the number of books they read at camp, on a digital device at home, or on a computer at the public library.

Campers read 1,451 books over the course of the camp and into the month of August at home.

Each grade level benefited from a new partnership with the Davie County Public Library through which they enjoyed a weekly story time with Julie Whitaker.

Students thrived on outdoor time during their activity/lunch time with YMCA counselors, who serve as Davie County Schools teacher assistants during the school year.

Informal performances and “sharings” were held routinely throughout the camp. Students often begged to be able to perform for their peers which was another indication of their growing self-confidence as these performances often involved memorizing lines, playing musical instruments, or presenting a dance that they had choreographed with a small group. These ranked among the highlights of the camp experience.

Camp closed with a large all-camp celebration of the themes of Native American culture which recognized each camper as a valued member of the tribe.  Students sang, played musical instruments, performed traditional ceremonial dances, and shared their art exhibits. This was not a traditional performance, but what A+ Schools refers to as an “informance” that is held without the pressure of adults and families watching, but is solely for students to share their creations with each other.

It was an opportunity to celebrate four weeks of successes. For many, it was their first time to shine in an educational setting.

The final result was 120 excited, engaged students with newfound confidence who are ready to tackle a new school year.