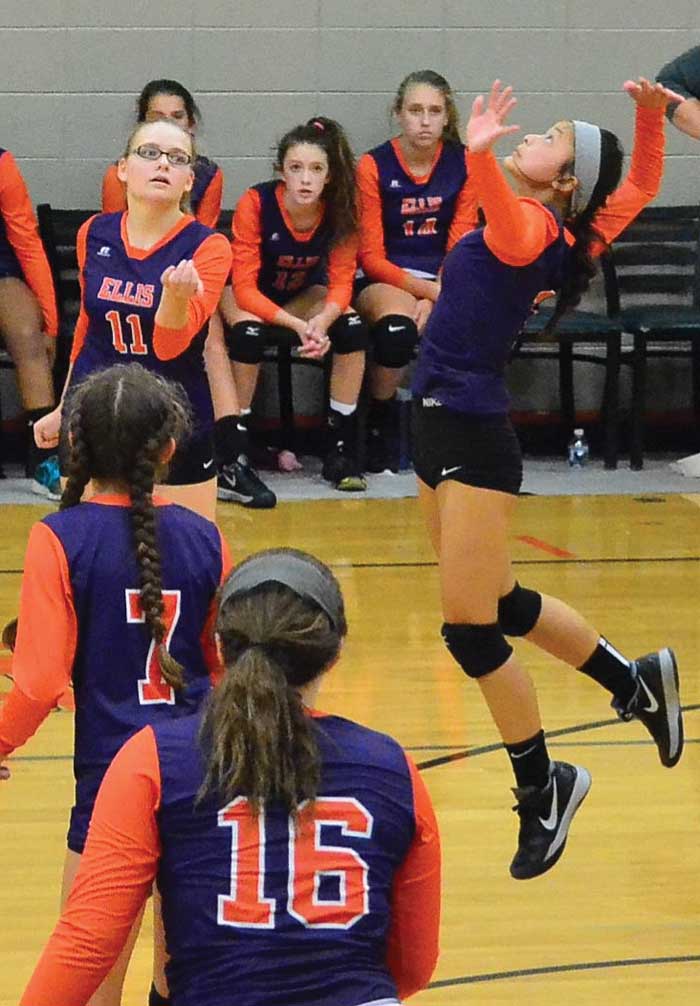 The action was exciting for the South/Ellis volleyball matchup.

The South Davie volleyball team’s 2-1 win at Ellis on Oct. 17 was a very big deal.

Let that sink in a minute.

“Ellis played a great match with minimal errors, and it was a fun match to watch,” South coach Gloria Chalmers said. “We could not afford to make mistakes and get down on ourselves. My girls could have easily given up after getting beat in the second set, but they came off the court and said, “We got this.’ We were not defeated at all and I could see it in their eyes. We had prepared for that third set all season in our minds.”

The Tigers beat Ellis for the first time in seven years. Talk about icing on the cake to an 8-3 season that included a three-match winning streak at the end. On the flip side, Ellis (9-1) suffered its first loss since 2-1 at Forbush on Oct. 21, 2015.

“It was definitely a tough loss,” Ellis coach Samantha Wallace said. “The girls fought hard, but we just couldn’t pull it out. It’s a hard way to end the season, but overall the girls played really solid all season.”

South took the first set 25-21. It was 10-10 before the Tigers charged in front 18-11. Ellis ripped off a 10-4 run to cut South’s lead to 22-21. South held on. Ellis was playing without its regular libero, Peyton Justice, who was out with an illness. Ellis’ normally consistent serving was off as it missed seven serves.

The third set yielded a most memorable moment for the Tigers, who built a 7-2 lead and won comfortably. Ellis did get as close as 11-7 with an Alli Angell kill.

“All season we knew we could count on Hailee’s consistent serving, and she kept it up in the Ellis match,” Chalmers said. “Dyllan had an amazing match at the net with two blocks, five tips and seven kills. Taylor and Layla contributed with kills and several tips at the net. We really improved covering tips, which we struggled with the first time we played Ellis. Miah did a great job coming in and catching the tips, and she had a great serving night. Millie and Miah had some great sets to help Dyllan, Layla and Taylor at the net. We had a new libero due to an injury, and Ashlee, a seventh grader, did an excellent job and had several digs.

“The girls learned to work together and trust each other. They never gave up. Every season our focus is working together as one unit just like a family.”

Despite the huge letdown at season’s end, Wallace was proud of the 9-1 record. “We had a great group,” she said. “Being able to help them build their skills and watch them grow as players as well as grow together was awesome to be apart of.”