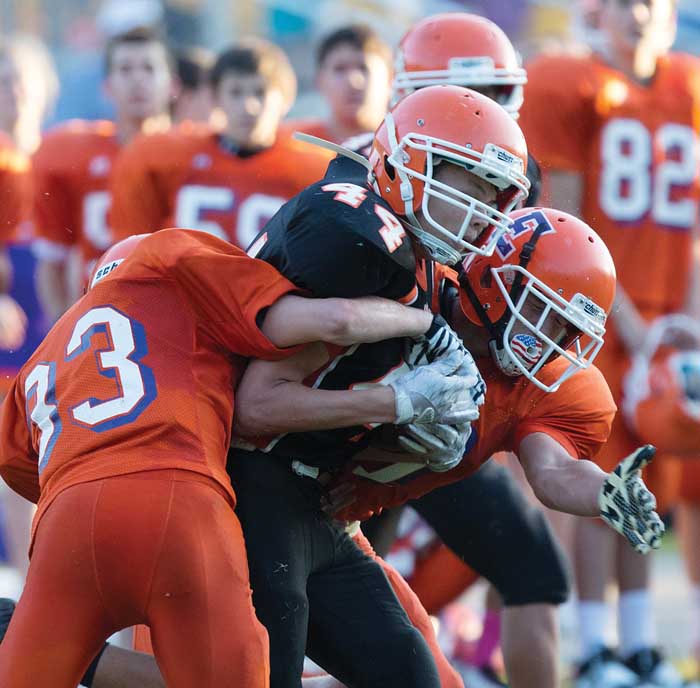 The anticipation was delicious. The South Davie and Ellis football teams entered the Oct. 19 showdown at South with undefeated records.

For a half, this was an event. Ellis struck first and South countered twice to take a 16-8 halftime lead.

But it turned out to be another re-run for the Tigers, who showed their explosiveness in the second half and pulled away 30-8. With a large crowd on hand – the junior varsity and varsity football teams from Davie High were among the fans for a good chunk of the game – the Tigers looked every bit as good as their coaches and fans had dared to dream.

“I told the kids: ‘This is like the (Floyd) Mayweather vs. (Manny) Pacquiao fight right here,’” South coach Perry Long said. “It had been talked up all year. I said: ‘Let’s see if we’re going to be on the Mayweather end or the Pacquiao end. We’re going to get hit and we’re going to take some shots. But Mayweather’s not looking for a big knockout. Mayweather is looking to get a lot of hits in.’ They were ready to eat nails. I knew they were ready. We’re not in a conference, but that was our championship.”

The Jaguars stumbled to 5-1. The Tigers, whose closest margin all season has been 17 points, improved to 7-0.

The Jaguars started well enough. They got a quick turnover on downs at the South 35 and drove for an 8-0 lead. Jake Hill scored from 3 yards out and Beavan Arey converted the kick.

“We hadn’t adjusted to what they were running,” Long said. “We didn’t get to watch them play this year. Once we made adjustments, we were able to stop them.”

South answered immediately as MJ Holleman tossed a 45-yard touchdown to Gage Recktenwald. Guillermo “Willie” Garcia made the kick to tie the game at 8.

South had a 16-8 halftime lead when Holleman completed a 1-yard TD to Jack Reynolds and Garcia converted the kick.

“After the first drive, it was probably our best game of the year,” South assistant coach Germain Mayfield said. “Defensively, we took control. We didn’t let them run in space. We kind of bottled them up.”

The second half began with South getting assessed a five-yard penalty, meaning Garcia would kick off from the 35 instead of the 40. No problem. He still boomed it into the end zone for a touchback.

“It took one bounce and went in the end zone,” Mayfield said. “It hit inside the 5-yard line.”

Recktenwald got an interception. Then Holleman found Isaiah Lytton with a 42-yard TD, and South’s lead was 22-8. Lytton also had a fumble recovery.

“(Lytton) was used to playing a weight limit in Winston-Salem,” Long said. “It has taken him until this part of the season to get all of that out of his system. He also played great defense (at cornerback). Now he knows how to play with us.”

“(Lytton) stepped up his game all the way around,” assistant Kerwyn Wilson said. “He did a real good job shoring up the edge whenever they tried to bounce outside on the tight-end side.”

The game’s final TD was a 12-yard pass from Holleman to Recktenwald. Garcia’s kick made it 30-8.

Holleman torched the Ellis secondary, going 7 of 14 for 142 yards and four TDs without an interception. He connected with JT Bumgarner three times and Recktenwald twice.

Holleman was South’s leading rusher with a mere 20 yards, but the Tigers didn’t need much of a ground game because of their stellar passing attack.

Edgar Ramos also had an interception, coming in the fourth quarter, and the inside/outside linebacker combined with inside linebacker Holleman to give South another stout defensive effort.

“Edgar did a lot of work,” Wilson said. “There were a lot of plays coming toward him today, and he was able to stick his hat in there and make some plays.”

Davie football players watched the action until the middle of the third quarter, when they headed back to school to practice. Their presence made South’s clicking-on-all-phases performance all the better.

“There were so many people there,” Mayfield said. “Everybody and their momma came out for this one. When our kids came out at halftime, all the kids who came from South were there patting them up. So it made our kids feel really good.”

Notes: South lit up an Ellis defense was allowing just 3.6 points per game. … The Tigers have been so prolific offensively that their 30-point output actually matched a season low. … South leads the all-time series 7-3.

Kristian Lyons scored two touchdowns, and Mason Privett came up with two interceptions as North Davie picked up its first win, 13-12, at Thomasville on Oct. 19.

The Wildcats, who were off to their worst start in 20 years at 0-5, really needed this one with Ellis and South Davie coming up. They suffered narrow losses in the first three games – losing by 10, seven and two points – before getting pounded by Forbush and Starmount. They responded with their first win since last year’s 14-0 season finale over South Davie.

“It was a good win,” coach Timmy Allen said. “We’re a play or two away from having a totally different record. We’re going to have our hands full with Ellis and South, but they’re playing until the very end. They’re not giving up, and I respect all those kids for it.”

Thomasville stunned North on the game’s first play, completing a halfback pass for a long touchdown. North blocked the extra point to keep the deficit 6-0 – a play that would loom large in the end.

Privett, a safety, was burned on the play, but he would more than make up for it.

“He ended up coming up big for us with two interceptions – one to seal the game,” Allen said. “He was kind of under the radar, but he’s a tough kid.”

North answered with a methodical drive. Lyons capped it with a 5-yard TD run. Xavier Evans ran in the one-point conversion as North grabbed a 7-6 lead that stood up the rest of the half.

After a scoreless third quarter, Thomasville regained the lead, 12-7, with four minutes to play. Again, North blocked the kick attempt.

Evans returned the ensuing kickoff to midfield, setting in motion a game-winning drive. The defining moment came on fourth-and-1 from the Thomasville 35 with 1:30 remaining. Lyons took a direct snap, shot up the middle and then turned on the speed for a touchdown that gave North the 13-12 lead.

“I thought a defender had a good angle on him, but he kicked into another gear,” Allen said. “He’s a great leader and he led us to a victory. We like to give the ball to Xavier a lot, too, and he does a good job running the ball.”

Thomasville got the ball back, but only 50 seconds remained and it was out of timeouts. Privett got his second INT with 30 seconds to go.

Allen gave shout-outs to Evans, who plays outside linebacker on defense, and Jadon Davis, who can play anywhere (offensive line, running back, defensive line and linebacker).

“Evans had a huge tackle that probably would have been a touchdown if he didn’t make the tackle,” Allen said. “Davis can do it all and he plays with a high motor. I really like him. I would say he’s our best blocker, but we put him in the backfield and he had some hard runs that helped extend some drives. On the game-winning drive, he had some hard-fought runs. It wasn’t just Kristian on that last drive.”

North has a four-game winning streak against Thomasville. The 13 points were a season high for the Wildcats.