Davie pulls away for blowout win 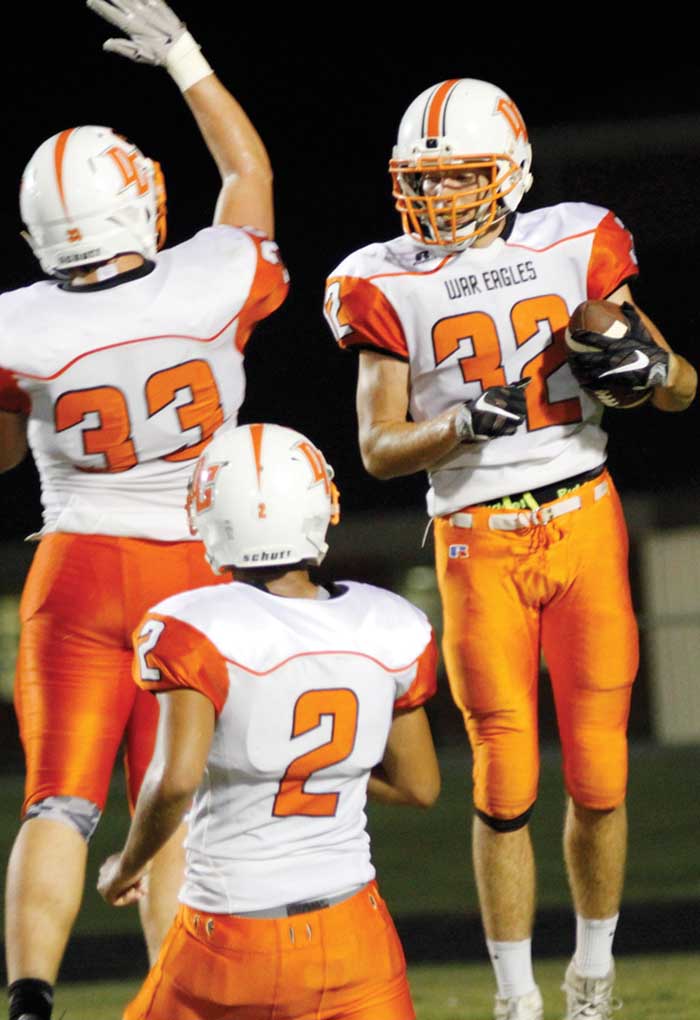 HUNTERSVILLE – Davie’s football team had considerably more talent than Hopewell, yet Davie wasn’t good enough to beat the Titans by simply showing up, especially with a shorthanded lineup. Hopewell proved that by taking the lead in the second quarter.

But talent tends to find its way, and visiting Davie pulled away in the second half to win 37-12 Friday in the final nonconference game. The Titans fell to 1-4 with their closest margin of defeat during a four-game skid. Davie improved to 4-1.

“One of the toughest things in coaching is getting your kids prepared to play an opponent when your opponent’s record may not be as good,” coach DeVore Holman said. “Hopewell played hard. Their guys got after it. We came out flat. You’re talking about 15-, 16-, 17-, 18-year-old kids and trying to figure out what’s going on in their minds. I don’t think their minds were where they needed to be at the beginning of this game.”

The good part for the War Eagles: They stuck Hopewell with minus-34 rushing yards, turned back 12 of 13 third-down plays and both fourth-down attempts, forced eight punts, and watched the Titans commit 15 penalties. They put up 366 yards, 17 first downs and offset 3-of-11 third-down conversions with a 3-for-4 effort on fourth downs.

They also got interceptions from Kinston Whitener, Hite Merrifield and Broc Barnette, the latter a pick-six. They got sacks from six players, with Spencer Wilson involved in two. Barnette, Jalen Redmond, James Boyle, Cody Hendrix and Jesus Olmedo had one apiece. Adrian Cranfill, the shifty and slippery freshman, carried 20 times for 147 yards, building on his 83-yard output against North Rowan.

The not-so-good: Davie gave up 269 passing yards and it fumbled seven times, losing five of them.

“At times we didn’t defend the pass well,” Holman said. “We had three picks, but still they gained a lot of yards on the passing game. Our No. 1 thing offensively is protecting the ball. We had five turnovers and were able to get a win. We were fortunate.”

Josh Hall quarterbacked for the second week and picked up 8 yards on the game’s first snap. Peyton Hampton rumbled for 10 and 15 yards on the next two plays, and Davie clicked off 16 plays and four first downs to reach the Hopewell 8. It settled for a 25-yard field goal from the reliable Jared Griggs.

But it was an ugly first half for the War Eagles. They failed on a fourth-and-3 play from the Hopewell 26. A Titan stripped Hall as he was getting ready to throw, resulting in the first lost fumble. Less than four minutes later, Whitener hit quarterback Jared Bateman but he was still able to throw deep. Koree Summerville got behind the deepest defender and hauled in a 64-yard touchdown that put Davie in a 6-3 hole with 6:11 remaining in the first half. Six plays later, Davie fumbled on what would have been a first-down run to the Hopewell 21.

“(The 6-3 deficit) was unacceptable,” Whitener said. “We were lazy and not playing good at first. We got things turned around in the second half.”

It was past time for favored Davie to assert itself, and Whitener, a junior outside linebacker, provided a spark with an interception at the Hopewell 48 with 1:38 left in the half.

“They were trying to hit the slant,” Whitener said. “The offense did good after that and got things going.”

“I think Kinston was doing what he’s coached to do,” Holman said. “He was under where he needed to be. He had good depth and it hit him right in the hands.”

Two incompletions made it third-and-10 from midfield, but Hall and Tyler Roberts hooked up for a game-turning play. Roberts came back to secure the pass at the Hopewell 24, the defender fell and he cruised to paydirt as Davie took a 10-6 lead to the locker room.

J. Olmedo and S. Wilson combined on a 16-yard sack and Merrifield intercepted a desperation deep ball with 18 seconds on the clock.

“It was a take route,” said Roberts, whose only catch triggered a 20-0 run in a span of 5:42. “The ball was underthrown a little bit, so I had to come back and get it. We were looking for that big play to break through. We know we’re a much better team than we played tonight. We came out a little flat, but we picked it up in the second half and showed how we can play.”

“Josh gave Tyler a chance to go get it,” Holman said. “Tyler played the ball well. That was a big pick-me-up right there.”

Holman and his coaching staff stretched their vocal cords at halftime, and on cue, Davie quickly turned Hopewell into a punching bag. After Redmond’s sack on third own, Hall found Cameron Thomas for 38 yards, setting up Hampton’s 5-yard TD. Less than two minutes later, Barnette struck.

Earlier in the season, the junior outside linebacker blocked a punt before blocking an extra point to spell the difference in a 7-6 squeaker over North Rowan. Barnette added the pick-six to his collection by intercepting Bateman and walking in from 28 yards out. At 23-6, the War Eagles were feeling a lot better about things.

“(Defensive coordinator Tim Devericks) talked to them about getting depth and getting underneath sit routes that they wanted to thrown on us and that they had had success on,” Holman said. “Last time (against West Rowan) it hit Broc in the hands and he dropped it. He held onto this one.”

The Davie avalanche was just beginning. Boyle’s sack preceded a 16-yard punt and Hall hit Beau Byerly for 27 yards to the Hopewell 8. Hall was banged up during a scramble for a fumble that Davie recovered. Merrifield was pressed into QB duty for the rest of this series. Hampton ran for 8 yards, followed by Merrifield’s 4-yard keeper to the 2. Hampton finished it off with his second TD.

On Davie’s next possession, Cranfill used spins and cuts to make seemingly 11 defenders miss on an 11-yard run to the Hopewell 5. Then Hall tossed his second TD, this time to Byerly, and it was 37-6 late in the third.

Hall held down the fort with 11-of-22 passing for 154 yards, without an INT. Byerly and Thomas reeled in four catches each.

• Clubb was injured with 8:20 left in the first quarter. He did walk off under his own power. He was replaced at right guard by Marvin Del Cid. “I don’t know (the extent of the injury),” Holman said. “I don’t want to speculate because I really don’t know.”

• D-line coach Randy Athey has a salty rotation going, with six talented guys – George Cuthrell, Redmond, Ronald Wilson, S. Wilson, Anthony Olmedo and J. Olmedo – sharing three spots. “We run them in every 2-3 plays,” Holman said. “We want fresh legs on the d-line. Coach Athey does a great job of trying to rotate those guys in and out.”

• While pass defense has been spotty for Davie, it’s been splendid against the run. N. Rowan and Hopewell had 45 rushes for 57 yards.

• Griggs had another good night. He averaged 49 yards on two punts, including a season-best 55-yarder. Davie hit two field goals in 2015. Griggs is already 6 of 7.

• Although his 147-yard night was a little tainted by two fumbles, Cranfill recorded the most rushing yards in 17 games. Cade Carney went for 170 in a 37-22 first-round playoff loss at Catholic in ‘14.