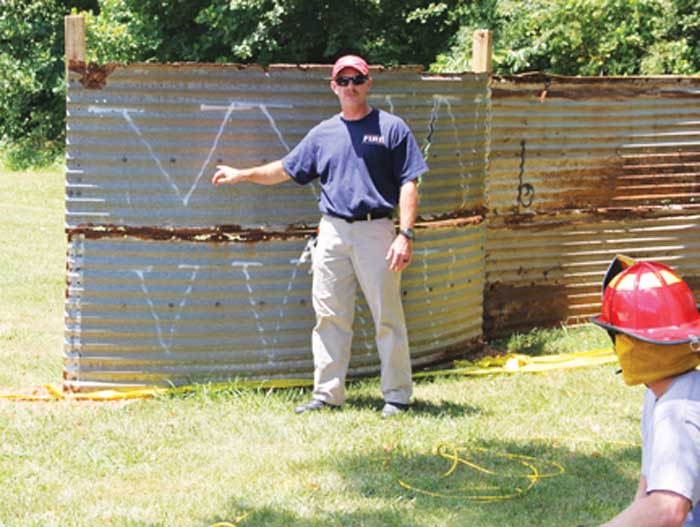 A Tyrell County firefighter explains how to cut to enter a grain bin to rescue someone.

Like quicksand, the more they struggled to free themselves the farther they became stuck – with one employee up to his neck in corn grain.

Disasters such as this are more common than many expect. In fact, Purdue University recently completed research indicating that grain elevator accidents are on the increase.

Realizing the need in North Carolina, the two sought to gather necessary equipment and training in case they were called to a similar accident.

Most people travelling rural highways are drawn to picturesque grain bins often referred to as silos but never realizing the work and inherent danger unseen in bin operations.

After harvesting, grain farmers bring the grains to include wheat, rye, soybeans or even corn to grain bin loading docks. The trucks are weighed and the grain is unloaded into pits where the grain is pumped into wet tanks where the grain is dried then sent through elevators into the larger dry bins often containing 80,000 bushels or more of grain.

Most people gaze at these multi-story dry bins and may notice older bins dotted with straight exterior staircases or newer bins with spiral staircases used in case issues occur.

The Perdue University study recorded 40 bin incidents in the last 10 years, nationally. Death through air affixation is a common result.

Reasons for entry into these bins vary but are most common in bad weather years such as 2010. Long, cooler and wet winters tend to create corn crust or grain clogging which remains unnoticed until grain is attempted to be removed from the bin elevators. Then, perhaps an auger in a dry bin clogs from corn crust and shuts down, causing an employee to enter an elevator in order to find the source of the problem.

A multitude of concerns ranging from slipping off a ladder into the grain to sudden rush of corn falling after freeing from an auger can trap even the most seasoned bin elevator employee.

Entrapment becomes a nightmare. Without a mask, a person covered in grain has minutes to live. Hopefully, someone witnessed the accident or heard the cry for help because freeing the entrapped employee requires on the average six to eight hours.

On Memorial Day 2015 a grain bin accident in Tyrrell County required the aid of four fire departments, the sheriff’s office, and ambulance services to include one air ambulance that together with the first responders took nearly six hours to successfully free the entrapped owner of the family operation.

A lack of proper equipment and local training is citied as a major obstacle for such rescues and Bryan and Wesley Foster have led the fight to bring critical grain bin lifesaving techniques and training.

To save a grain bin entrapped victim requires a tube – often plastic – to be placed around the victim to relieve pressure and hopefully regain the use of the victim’s arms. Finding the victim requires a crate or similar object placed under the rescuers feet to avoid a similar quick sand entrapment.

Then grain extraction begins. Outside the grain bin a team of rescuers pin point the proper areas to cut through bolted metal bins with V shaped patterns that are purposely opened to allow grain to exit away from the victim. This is a tedious, dangerous and time-consuming rescue compounded with inexperienced first responders.

The Foster brothers decided to purchase and donate four rescue trailers equipped for bin rescue and extraction.  Their goal is to distribute the trailers to cover different regions of North Carolina.  The brothers paid out of their own pockets $10,000 for each rescue trailer. Then with the help of a trained Lake Phelps grain employee and aid from Tyrrell Volunteer Fire Department members Lee Scripture and Joie Spencer – traveled regions of the Tar Heel State to train volunteer fire departments and other responders on how use the equipment.

On June 18, the rescue team came to Courtney Elementary School in Yadkin County and gave a four-hour training class, then conducted simulated bin entrapments using first responders and volunteer firefighters across Davie, Yadkin and surrounding counties. The goal was to educate responders by understanding what creates grain bin problems.

Then, they taught problem-solving techniques that demonstrated through simulated accidents proper rescue extractions.

Ultimately, the brothers hope a majority of fire departments will be ready for the next grain bin call and the entrapped worker safely reunited alive. Lake Phelps Grain Inc. encourages any needing further information and to schedule training in bin rescue to contact them by email at jcaudle@lakephelpsgrain.com.

president, Forks of the Yadkin and Davie County History Museum.