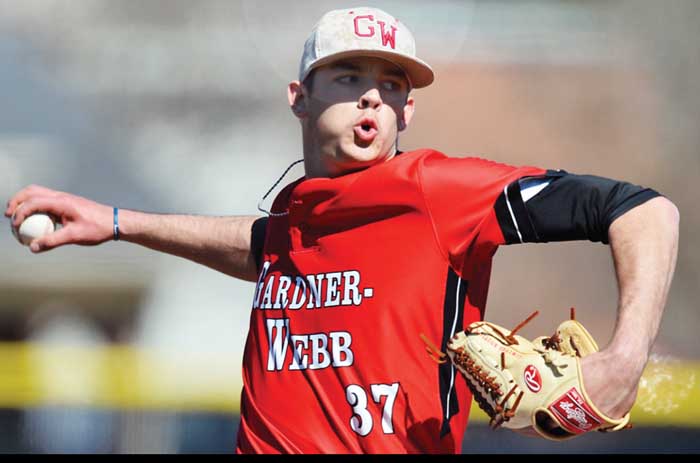 First there was Jared Barber of Mocksville making the Carolina Panthers’ roster. Then Whit Merrifield of Advance gets called up to the Kansas City Royals.

And now there’s Jeremy Walker of Advance, who was picked in the fifth round (139th pick) by the Atlanta Braves in the Major League Baseball Draft.

Three Davie County athletes making big-time news in a span of a month or so.

Walker, a 6-5, 200-pound pitcher who just completed his junior season at Gardner-Webb, is the son of Joel and Lori Walker of Advance. He attended Pinebrook Elementary and Ellis Middle School before spending three years at Calvary Baptist. He went to Davie as a senior, graduating in 2013.

Walker had a superb senior season for coach Bobby Byerly and the War Eagles, going 7-1 with a 2.02 ERA to lead Davie to 16-8. Six of his 10 starts resulted in complete games as he logged 62 1/3 innings.

But he was less than stellar his first two years at Gardner-Webb. As a freshman, he missed the first half of the season. He only pitched 17 1/3 innings in three relief appearances and three starts. His record was 3-2, his ERA 4.15. As a sophomore, he went 2-5 with a 4.97 ERA. In 12 starts and two relief outings, he worked 63 1/3 innings.

But Walker stepped up and shined as a junior, helping the Runnin’ Bulldogs to an historic season with 37 wins against 21 defeats. In 15 starts, he went 9-5 with a 3.77 ERA. He turned in three complete games. In 100 1/3 innings, he racked up 99 strikeouts against just 27 walks. He ranked second in the Big South Conference – behind teammate Brad Haymes – with 99 Ks. He fired a one-hitter in a 3-1 win over High Point on April 16. In the Big South Conference Tournament quarterfinals, Walker delivered an inspiring, complete-game performance in a 4-3 loss to 15th-ranked Coastal Carolina, which advanced to the College World Series with a dramatic win at LSU on June 12. Walker went the distance against the Chanticleers, walking one and fanning seven. His fastball reached 97 miles an hour in the middle innings and was in the low 90s as late as the eighth inning.

With Walker earning honorable mention All-Big South Conference honors, the Runnin’ Bulldogs set a school Division I era-record in wins as it finished in a tie for second in the conference. The second-place finish in the regular season is the highest in G-W history.

Jeremy Walker came out of nowhere from a small D-I school to become the 139th pick because he began to realize his vast potential as a junior. And scouts believe he’s only scratched the surface.

“I think they like the fact that they saw me progress in college,” Walker said. “They saw me when I wasn’t very good. They knew I was working hard and they saw me whenever I got better. Every one of them said there’s still room to grow. One thing they all like is the fact that I’m nowhere near developed to where I will be and I should be able to get so much better.

Walker was ranked No. 320 on Baseball America’s Top 500 Prospect sheet. He was No. 18 out of North Carolina.

The MLB Draft was held June 9-11. Walker knew he wouldn’t hear his name on day one, but he was confident he would get the call on day two.

“Most of them had me going somewhere between the sixth and ninth round,” he said. “The draft is a pretty crazy thing. Some of them said I would go earlier; some of them said I’d go later, depending on who was going to get picked before and after and all that stuff.”

When day two of the draft was unfolding on June 10, Walker was anxiously watching from home with his parents, grandparents, brother and a few friends. When the Braves made it official, Walker joined exclusive company, becoming the fifth Davie High grad to get drafted. The short list includes John Parker (fourth round by the Phillies in 1965), Denny Key (17th round by the Indians in 1991), Whit Merrifield (ninth round by the Royals in 2010) and Joe Watson (12th round by the Rangers in 2014).

“Two picks before it happened, a Braves scout called and said if you don’t get picked before, we’re getting you in this round,” he said. “Once I heard my name called, I just sat there for probably three or four minutes. I didn’t even move. Then I kind of lost it a little bit. I was so happy. It was a feeling I’ve never experienced.”

Walker’s decision whether to sign or return to school was an easy one. His signing bonus was expected to be in the neighborhood of $400,000.

“I’m happy about (the signing bonus), but I’m just thankful for the opportunity and for the ability that God’s given me,” he said. “I was wanting to go to an East Coast team – the Braves, Yankees, Nationals, teams like that. The teams that were talking to me the most were the Braves and Yankees, and they were my top two teams before the draft started. So it honestly could not have worked out better. I can’t be more happy. The Braves have been my favorite team since the time I was like 5 years old.”

Walker will begin his pro career with the Danville Braves (Va.) at the advanced rookie level – just 90 or so miles from home. The season begins June 23.

“I’m signing on (June 13) and I’ll head out to Danville Wednesday or Thursday,” he said. “It’s not too far, so my parents are really happy about that. We will have practices and stuff and go through a minicamp. I think they have me (as a starting pitcher) at the beginning. Some of the guys said going into the draft they may make me a reliever. I threw a bunch of innings this past season, so I don’t know.”

Notes: Walker was the first Gardner-Webb player drafted since the Braves selected pitcher Adam Bullard in the 48th round in 2008. … He was the highest pick for a G-W player since Zach Ward went to the Reds in the third round in 2005. … Walker was the fourth pick from the state of North Carolina.