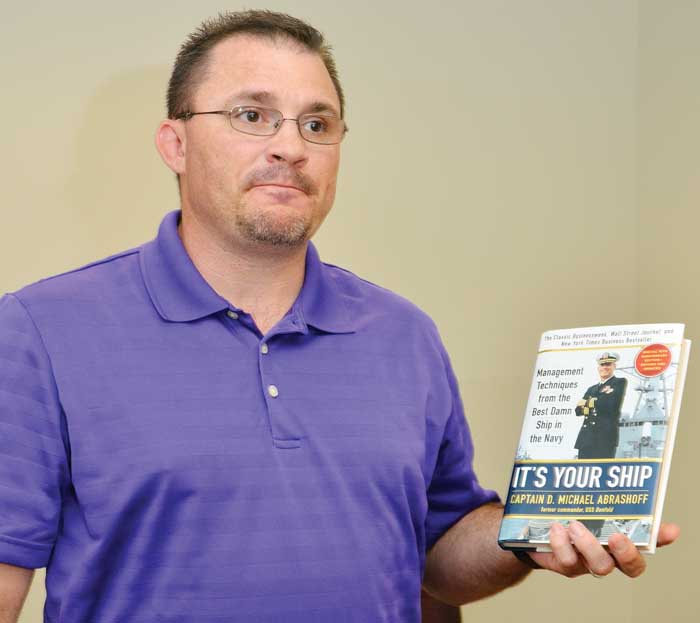 Growing up as a star athlete in Thomasville, Paul Moore knows the joy and opportunities that recreational activities can bring.

The first director of the new Davie County Recreation Department wants those opportunities for all residents of Davie, from infants to active older adults. And he doesn’t want them to have to travel far for some type of recreation in a county park or county-supported program.

“It’s about the people. What are their needs and wants?” he said.

Moore was hired early to help build the new department. After many years of the Mocksville-Davie Recreation Department, operated by the town, on July 1 the county will take over the department. He is working out of a temporary office in the Development Services building, but will move to the Brock Gym office soon after July 1.

A former recreation coordinator for the City of Salisbury, Moore said that Davie County is at a recreation crossroads. The department will move to the current Davie High site after the high school moves, with many of those improvements scheduled to be paid for by a bond approved by voters.

“The county is realizing that we need opportunities for families, to make kids say hey, I want to come back here. We have a huge opportunity to establish Davie County as a whole … not Mocksville, or Cooleemee.

“This department is going to create vibrance and uniqueness that is different from surrounding counties,” he said.

Moore wants residents to think out of the box. What would be a good recreational opportunity in their community that isn’t offered somewhere else nearby. He has plenty of ideas, but wants to hear others’ ideas.

He’s also looking for uses that can easily be converted to something else. As time goes by, recreational desires change, he said.

“We’re a quality of life department.”

Senior Games have been moved under the auspices of senior services, but most programs will remain. Next year will also be time to update the county’s recreation master plan. Those need to be updated every 3-5 years, he said, voicing his disappointment with the low (367)number of respondents to a survey.

“This year will be a transition year. We’re creating this agency from the ground up. I want every household to have an opportunity to fill it out … or go online and fill it out.”

Part of creating the department will also include an advisory board, Moore said.

His idea of local, small parks will require working with communities, as some facilities aren’t owned by the county. Partnerships could work in some of those instances, he said.

“When I take a plan to the board of commissioners, I’m going to have the public’s backing. Work through the politics. Ultimately, it’s what the voters want.”

He loves Mocksville’s Rich Park, and hopes the county can attach to the greenway system there. The trend is going to more healthy living and healthy lifestyles.

“People are realizing their health and fitness is a viable part of their lives. Recreational opportunities are a natural fit. We create impact,” he said.

Go into Moore’s office, expect to see a copy of the book “It’s Your Ship.” Flip through it, you’ll see that many of the passages are highlighted.

He is a graduate of The Citadel.

How he got there is a story in itself.

A high school football player, and champion wrestler and discus thrower on the high school’s track and field team, he got a speeding ticket. His parents made him handle it himself, and that meant going to see Thomasville attorney, William B. Mills.

He had narrowed his college choices to Appalachian State or Iowa State, both had offered scholarships.

Then he went to see Mr. Mills.

“For 20 minutes, he talked to me. He talked about The Citadel and how great it was.” Moore noticed that a degree on Mr. Mills’ wall was from The Citadel.

He had the college register to send an application via air mail. Moore filled it out the next day, and Mr. Mills sent it via air mail back to The Citadel.

Three days later, he was accepted. His father said it was an opportunity he shouldn’t decline.

Moore knew it was a military school, but had no idea what that entailed. He learned quickly.

“They reduce you … and then they build you up into a solid rock … with vision, work ethic, and a brotherhood. It was an experience like no other. The principles and discipline and the honor code, I still live by, and I will until I’m laid to rest.”

Moore earned a degree in recreation and leisure service industry.

He started his career as assistant sports director for the Alamance Community YMCA. He moved to Salisbury in 2000, as a recreation programmer, before being promoted.

He and wife Tonya and their 9-month-old son, Greyson, live in Southmont, but plan to move to Davie County. Their son, Cameron, is 20.

“I want to be as much a part of this community as everybody else,” Moore said. “It’s important for department heads to reside in the county.”