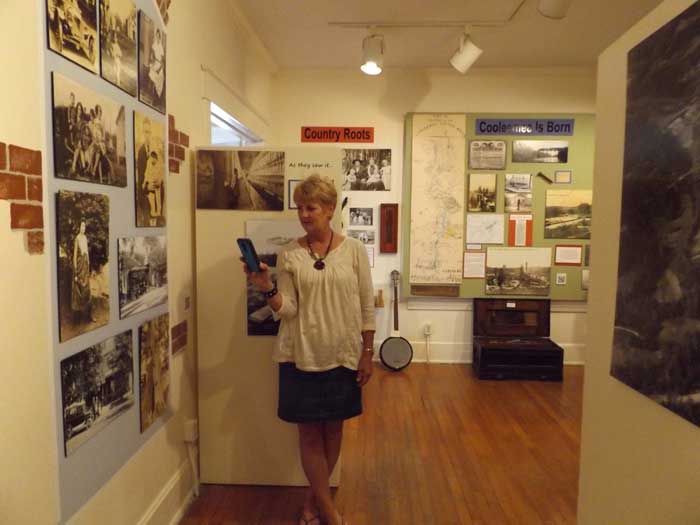 Sandra Ferrell uses her phone while touring the museum in Cooleemee.

COOLEEMEE – No, it’s not some new Zombie show on a cable channel.

But, like most things these days, it does involve technology. It even utilizes YouTube, WiFi, the Internet and those devices that threaten to end conversation at the family supper table.

It was a little eerie.

Despite the fact they had passed away years ago, the voices of now-gone men and women could be clearly heard from the Smartphones of more than a dozen witnesses gathered at the historic Zachary House in Cooleemee on a beautiful spring Sunday afternoon. They were there to “beta-test” a new technology.

The first was a chirpy, crisp woman’s voice who announced, “I’d been somewhere, I’d been to Cooleemee.”  Then another, then another – each a fleeting, personal glimpse of life, when it was lived differently.

Joe Spry told his son that neighbors had to rely on each other to survive in the “good old days.” Like a kid again, “Hon” Hillard laughed as he replayed a snippet of a Textile League ball game. Claudie Boger said you could buy “about anything you needed” down at the Square’s J.N. Ledford Department store.

Then, you could almost smell biscuits baking after the first mill whistle blew at 4:30 a.m., by the way that Lillie Bailey described the sound that woke up the whole village so they could get ready for work. These souls were definitely speaking to us, proudly, from beyond the grave.

Thanks to a new, digital self-guided museum tour created by Jessica Bierman of UNC-G, these voices can be heard for years to come by future generations. A collaboration between the UNC-G Public History Department and Cooleemee’s Textile Heritage Center, Bierman’s creation is part of completing her masters degree in public history at the university.

The new self-guided museum tour works through a WiFi connection. It utilizes QR codes posted on museum panels that each prompts the download of a YouTube video at 14 stations. The video narration combines elder interviews with recorded docent tours. Video images were edited from Cooleemee’s Textile Heritage Center archives.

The self-guided tour’s beta-test on Sunday, April 17 was attended by an interesting, select group of invited guests. One criteria was that they all owned a device such as a Smartphone or electronic tablet. Each had some connection to CHA’s 27 years of history work.

Jimmy DeCess, who had spent the day before working out some kinks in the WiFi hot spot for the test, had been the youngest founding member of the Cooleemee Historical Association in 1989.

DeCess ran the video camera which recorded Claudie Boger’s voice that is heard in the new tour. Boger, his grandfather, ended up a star of the documentary film, “Memories Not Lost” which debuted in 1990. In the early 1990s he helped restore the first and second floors of the Zachary House.

DeCess was there on Sunday with his two daughters, Jamie and Lacy. Today he is the manager at RiverPark. Both daughters were invited to the gathering in their own right. Each had “graduated” from CHA’s Discovering Our Heritage kids program and are of middle and high school age. They are being home-schooled by DeCess and his wife, Cathy, a retired teacher and CHA Board member.

“It was neat,” says retired teacher and author Charles Crenshaw of Mocksville. “The tour technology was pretty easy to use. Once you downloaded the QR code app and the WiFi password, you could go to anywhere you wanted in the museum, like the baseball section and view the video. It really worked well.”

Crenshaw taught at Cooleemee School and went on to teach history for many years at South Davie. He’s always kept many special ties to Cooleemee and made extensive use of the Textile Heritage photo archives for the two retrospective books he has published. A news clipping in Cooleemee’s archives shows Crenshaw and his students exploring the historic gristmill site with its 20-foot stone walls before it was demolished by the local power company in 2005.

Coming back to the Zachary House brought back many memories for Kaitlyn Dodd. She’s living only four blocks away, in the mill house on Watt Street where she grew up. Kaitlyn graduated from UNC-G and commutes to a teaching job in Greensboro. She didn’t seem embarrassed when town historian Jim Rumley showed up with a 1992 photo of Dodd in a baby stroller, along with her twin sister Kara, at the first Textile Heritage Festival.

In elementary school Kaitlyn was a member of the Cooleemee Kids History Club. As fifth graders, club members built NC’s smallest museum on the Zachary House grounds. It was personal; her grandfather, Jack Athey, was a Cooleemee fire chief and her father is also a firefighter. The Fighter’s Museum was dedicated at the town’s centennial celebration in 1998. Kaitlyn was a camper and, later a counselor, at many Summer Heritage Camps.

Dodd said she liked the new tour, “it allows you to go at your own pace.”

After the museum tour, Kaitlyn spent time looking up her Lowder and Athey family ancestors in the giant 1934 map notebooks in the community room where the museum tour begins. She represents three generations of her family that still live in town.

Dr. Benjamin Filene, director of the University of North Carolina at Greensboro’s Public History Department, drove to Cooleemee to attend the test-run of this new technology tool. He has been gracious in collaborating with Cooleemee’s effort to preserve its history. Filene gave his advice on humanities grant applications, invited Cooleemee to share its experience with his classroom students and had a hand in steering Bierman to Cooleemee

“We are very thankful for Jessica’s work project,” says Center Director Lynn Rumley. “She has introduced us to some more new technoly – like gadgets called beacons. Our whole town can be viewed as a big history museum and it’s just the right size as an interesting driving tour.

“With better signage, a downloaded map, and these beacons at strategic historic spots to prompt a video, visitors could see and hear something about what used to fill what is now only a tragic void in Cooleemee’s landscape. Our 300 plus century-old mill houses continue to keep the feel of a mill town and we have the natural beauty of RiverPark. The tourism potential here for Davie County is significant. We are in Jessica Bierman’s debt.”