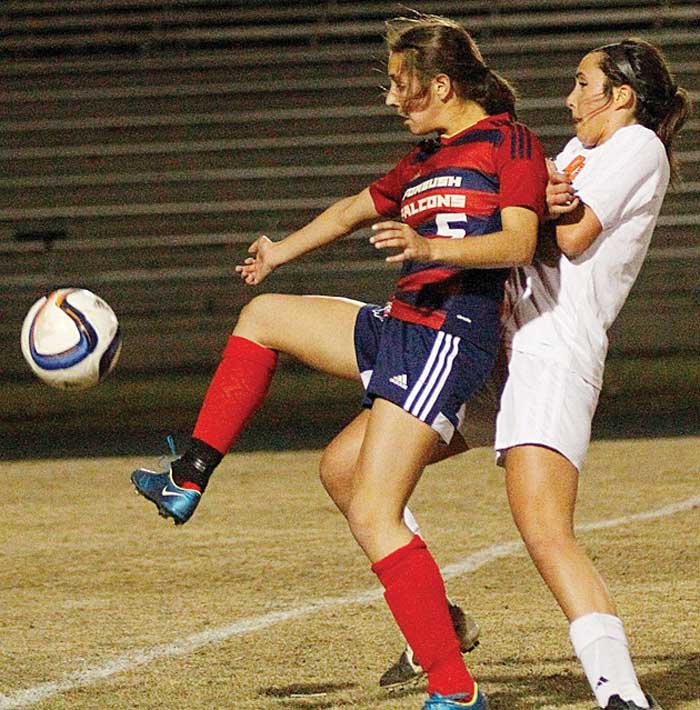 After winning just six games in 2015, Davie’s varsity soccer team is already one-third of the way there after the first week of the season.

The War Eagles opened with a 4-0 win at West Rowan on Feb. 29. Jessica Navarro had half the goals, including the only one in the first half. It developed on a cross from Faith Bokeno.

“It took us shot after shot before we finally were able to put the ball in the goal,” fifth-year coach Kerstin Steinour said.

In the second half, Davie pulled away with goals from Bokeno, Navarro and Ana Almazon. Emily Muchukot and Katelyn Hernandez had assists.

Forbush, however, was too much for Davie on March 1. The visiting Falcons scored the final three goals to win 4-1.

Hernandez tied the game at 1 off a throw-in from Allie Carter. Forbush took a 2-1 halftime lead and went on to beat Davie for the third time in a row since a 1-1 tie in 2007.

“We were sluggish and not moving the ball well,” Steinour said. “Our touches were off and we just weren’t playing to our best ability.”

A home game with North Rowan on March 4 was entirely predictable as Davie (2-1) steamrolled the Cavaliers 9-0. Davie mercy-ruled North by the same score in the previous meeting in 2014.

Muchukot and Annie Kinder scored two goals each, while Claire Devereaux, Hernandez, Jaci Grachen, Navarro and Almazon had one apiece.

Devereaux had two assists. Davie, which rolled up a 7-0 halftime lead, got one assist from Bokeno, Ali Guttenberg and Muchukot.