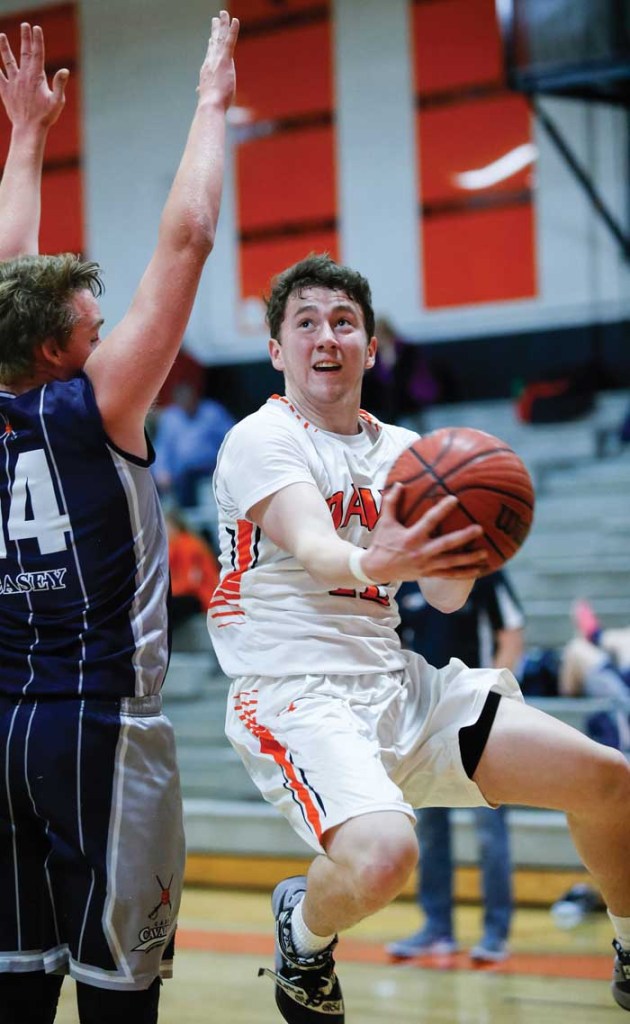 Davie senior point guard Nic Starnes goes up and under.

Unlike the first two meetings, the third Davie-Reagan contest in boys basketball lacked any drama. That was just fine with the War Eagles. That means they got exactly what they needed: A solid win in the first round of the Central Piedmont Conference Tournament to cement their playoff hopes – not to mention momentum for the postseason.

“The Parkland (win in the regular-season finale) was the must (win),” coach Mike Absher said. “That 13th win was huge. Now the 14th obviously didn’t hurt. Even though we felt like we were in (the playoffs), there’s no guarantee at 13, so every win was going to be important.”

The regular-season meetings ended in dramatic fashion. In the first one, Davie pulled out a 66-65 decision on a backdoor pass from Nic Starnes to Jordan McDaniel with under 20 seconds to go. In the next one, Davie lost 71-69 as Reagan hit an improbable bank shot at the buzzer.

“Nobody felt good about how the game ended over there (on Feb. 3), and our guys wanted to beat them on their own court,” Absher said.

Davie was dazzling in the opening moments. It roared to an 11-0 lead on a Jordan McDaniel 3-pointer, an L.P. Mua layup and back-to-back 3s by Heath Slabach, who scored 10 points in the first quarter. Reagan coach Jeff Overby’s timeout with the score 11-0 did not slow the War Eagles, who led 19-5 when Cooper Wall buried a floater. Reagan did close within 25-17 by quarter’s end.

“We practiced Saturday, we obviously had Sunday off and then it snowed (on Monday),” Absher said. “But our guys just came out really focussed at the beginning. Playing on the road, it was big to send a good, strong message right off the bat. One of (Slabach’s three 3s in the first quarter) was really deep. I mean it was unbelievable.”

The War Eagles cruised to a 39-27 halftime lead, but Reagan made a serious charge in the third, chopping Davie’s lead to 48-46 with 2:24 remaining in the period.

“We showed a lot of resilience,” Overby told the Winston-Salem Journal. “We were right there, but they’re a good team. They shared the ball. They knew their roles.”

Davie regained control with a 6-1 burst to end the quarter, capped by Michael Walton’s putback with 5.7 seconds left. Reagan got no closer than 69-63 in the fourth, when Mua put the finishing touches on Reagan with nine points, including two dunks and 3-for-4 free-throw shooting. Wall kept Reagan at bay with 4-of-4 shooting from the line.

Mua paced Davie with 14 points, giving him 43 in a strong three-game stretch.

Slabach and Wall had 13 points each, McDaniel had 11 and Dylan Shoffner had a season-high nine. Shoffner earned praise for his play during the second-half run that sapped Reagan.

“Dylan was big during that stretch,” Absher said. “Those seven (second-half) points were a huge part of that run, and defensively we got a lot of stops. Then they never really threatened us late in the game.

“Dylan had two solid back-to-back games. He was able to get out in transition and finish and draw some fouls. It’s nice to know that different people can step up for us, either starters or non-starters.”

Not many teams could have beaten top-seeded Mt. Tabor in the semifinals on Feb. 17 at North Davidson. Davie could not have played much better in the first half, yet it trailed by 12 (50-38) at intermission. Tabor (22-2) pulled away in the second half to win 101-66.

Davie (14-11) came ready, trailing 27-20 after the first as it got five points from Mua and 3-pointers from Slabach, Nic Starnes and Walton. In the second quarter, Wall nailed two 3s to keep the deficit at a respectable 50-38.

The Spartans, who hammered Davie by 29 and 43 points in the regular season, ran away in the third, with Cayse Minor outscoring Davie by himself in the quarter. He had 15 of his 31 points during that stretch as the margin grew to 78-49.

Minor, a 6-2 senior who has been offered a scholarship by Winston-Salem State, continued an incredible roll. He had 41 against Parkland, 40 against Davie, 36 against Dudley and 31 in this one to average 37 during a four-game stretch.

“Not only is he a good driver, he’s a good shooter,” Absher said. “The next piece to it, he plays with such energy. So he can shoot it, he can drive and he’s also going to score off of his defense. Because he gets steals and is good in transition. I just think he’s a very versatile player who plays so hard all the time. You talk about high-energy players. He truly is one of those guys.”

Davie did all it could, hitting 16 of 22 free throws and eight 3-pointers. Slabach, Walton and Wall banged two shots each from downtown. McDaniel had 16 points, Wall 13, Walton 10 and Slabach eight.