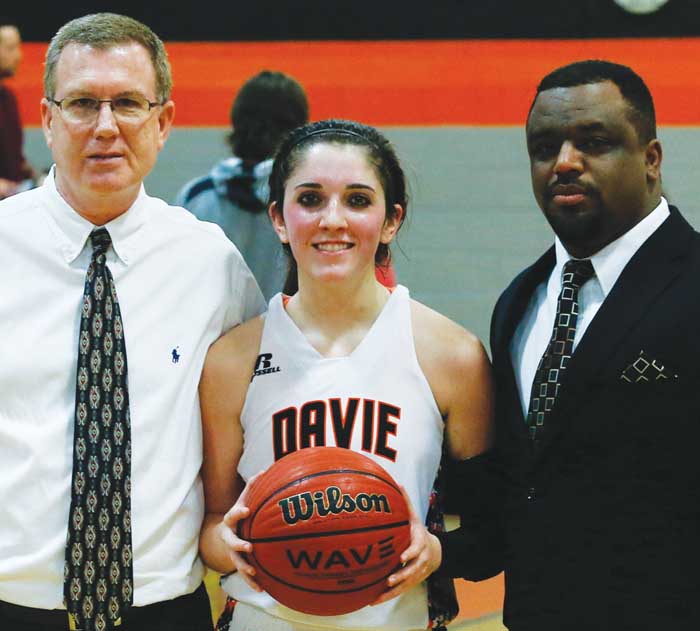 The War Eagles beat North Davidson and Reagan. But after generating nice momentum, they lost big to Reynolds. The fleeting success was all too familiar. Davie’s longest winning streak  is three. It has done that twice. Its longest losing streak is three.

Davie’s inability to put together a good streak has put it in danger of missing the playoffs. The top three teams are guaranteed berths, and the fourth-place team could receive a wild card. West Forsyth is 8-2 in the Central Piedmont Conference. Reagan and Reynolds are 7-3. Davie is 6-4.

“It’s crazy,” coach Dave Ruemenapp said. “There’s something about the way Reynolds gets after us that changes the nature of how we play. We haven’t been able to solve that riddle yet.”

Davie took care of business against visiting North Davidson on Feb. 1, winning 64-50. The story of the game was senior point guard Madison Zaferatos, who reached the 1,000-point plateau in the waning seconds.

Before that, the War Eagles established a big lead, jumping ahead 22-8 in the first quarter on the strength of Ashlyn Hampton’s 10 points. After going into halftime up 25-16, Davie got two third-quarter 3-pointers from Emma Slabach and pushed the lead to 41-26. There were 47 points in the fourth, and Davie excelled at the free-throw line to win comfortably after North had pulled within five.

“It never got real scary,” Ruemenapp said. “It got a little nervous for a while, but we righted the ship.”

In the fourth, Zaferatos and Patterson Jones combined to go 14 of 17 at the stripe. With 10 seconds remaining, Zaferatos hit two free throws to give her 1,000 career points. She went 15 of 17 from the line for the game, giving her 21 points and the seventh 20-point game of her career.

Zaferatos averaged 7.8 points as a freshman, 8.6 as a sophomore, 13.6 as a junior and was scoring at a 13.1 clip after the N. Davidson game. What’s even better, she did it on Senior Night.

“That turned out pretty nice,” Ruemenapp said. “We called timeout and commemorated the moment. She was able to do it on Senior Night, so it turned out about as well as it could. It’s pretty impressive. … These remaining games are so critical in the standings, and it’s nice to have one less thing to worry about. Just go out and fully concentrate on making sure we get some wins.”

“When they would make runs, Hampton would get a big block or get a rebound or hit a big bucket,” he said.

The War Eagles played splendidly at Reagan on Feb. 3, winning 54-41 to hand Reagan just its fourth loss of the season.

Five different War Eagles scored during a 15-8 first quarter. Reagan never threatened as Davie shot an impressive 20 for 40 from the field.

“We played incredibly well,” Ruemenapp said. “I mean we did everything right. Zaferatos was facilitating the offense beautifully, we played with such confidence and we were in total command the whole night. It was the best game we’ve played by far.”

But after taking a big step in the right direction, the War Eagles were stopped in their tracks by visiting Reynolds on Feb. 4. The 67-47 decision left a nasty scar.

“Do I think it hurt us? Yes,” he said. “Is it an acceptable excuse? No. If you get to the second round of the playoffs, you’ve got to play three games in a week against three good teams. If you can’t do it, then you’re just not good enough.”