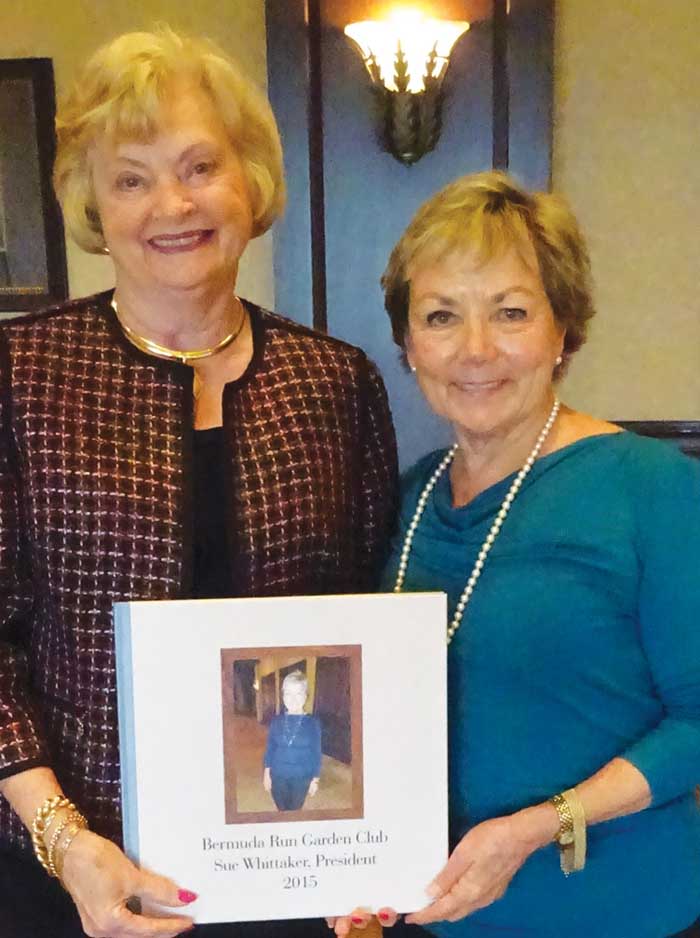 Bermuda Run Garden Club celebrated the end of one club year and welcomed the beginning of a new one with the installation of new officers.

Mary Ann Spainhour, District 4 Director for Garden Clubs of North Carolina, conducted the installation. Using a snowflake theme, she presented each officer with a hand-crocheted snowflake as she reminded them of the unique responsibilities of each office.

The incoming president is Peggy Schuppert. First vice president for programs is JoAnn Mintz and second vice president of membership is Lynn Marcellino. The secretary is Patricia “PJ” Guerra and treasurer is Kathy Zeitvogel.

Schuppert has chosen the theme for the year of “Flower Power from Bud to Full Bloom.”

Prior to installing new officers, outgoing President Sue Whittaker reviewed the record of accomplishments of the BRGC for 2015-2016. The list provided significant reason for celebration.

In 2015-16 the club welcomed five new members and honored the two charter members, Lois Price and Ann Cornwell, with Life Memberships in the Garden Club of North Carolina.

BRGC kicked off a website to improve communications within the club and with the public. Club activities were frequently shared with the public through local news media.

BRGC won the prize for Best Club Yearbook at the 2015 District 4 meeting for the third year in a row.

The club contributed to its Endowment Fund with the Davie Community Foundation which benefits the Children’s Reading Program.

The garden club collaborated with Bermuda Run Country Club to serve nearly 200 students and school staff at a luncheon for exceptional children of Davie County Public Schools and initiated a new community partnership with Walmart in Mocksville, which, with Lowe’s Foods of Kinderton, donated 70 pounds of cooked turkey for the event.

The club continued ongoing efforts to benefit A Storehouse for Jesus by donating food and other staples at club meetings, purchased needed school supplies, held a blanket and pajama drive, and donated 75 Thanksgiving meals.

BRGC completed a five-year membership commitment to Pearls of Empowerment of the Davie Community Foundation. Many members are personally active in Pearl projects.

“Besides making significant contributions of goods and services to the community, we have learned to attract birds to our yards, toured the awesome Tanglewood Arboretum, trimmed and trimmed and trimmed roses at Tanglewood, entered specimens in the Dixie Classic Fair, learned to make bird nests from dried flowers and herbs to decorate our Christmas trees, heard about plants that cause allergies and illnesses, planted and cared for our own amaryllis bulbs and shared that knowledge through our website and local media,” said member Betsy Cochrane.

“We created beautiful centerpieces for charity events, collaborated with the Town of Bermuda Run to plant and care for three beautiful planters at the post office and the town hall, sold 704 geraniums to friends and neighbors to beautify our community, and created 450 bouquets for lunch trays for Meals on Wheels recipients. We gave an appealing children’s book about plant germination to each of our little Lunch Buddies along with their own air plant and spray bottles to keep them healthy.”

In recognition of her leadership in all these endeavors, the club presented outgoing President Sue Whittaker with a hand-painted ceramic flower pot, painted with lighthouses, filled with a plant arrangement.