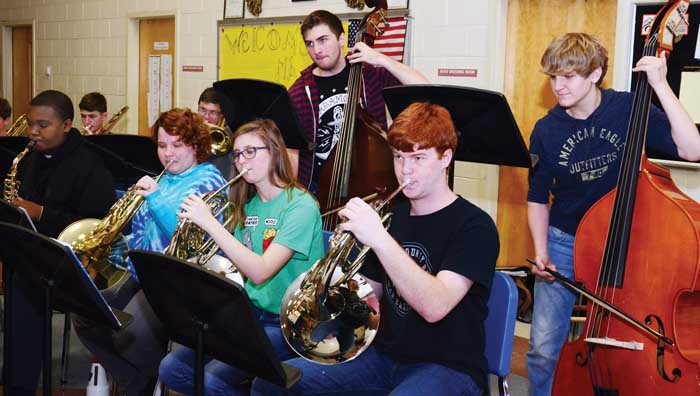 Davie High band members are not only practicing for the President's Cup in Washington, D.C., they're raising money to pay for the trip.

The Davie County High School Band has a reputation – a good one.

The wind ensemble was one of 100 contacted nationwide to audition for the President’s Cup National Concert Band Festival March 31-April 3 in Washington, D.C., hosted by the U.S. Army Band.

After sending in an audition, it was one of the eight of those 100 invited to the festival.

Several of these students are expected to play onstage with the Pershing’s Own U.S. Army Band.

Senior Mikayla Thomas, drum major and student conductor, is proud of how much the musicians she has worked with for years have grown.

“Now, we’re playing to the level of the Army band,” she said. “We’ve bonded together and we communicate when we play music. We’ve given it 110 percent every time.”

Talk to the students, and that cohesiveness theme comes up again and again.

“As you can see, there’s a ton of different people from different backgrounds,” said Austin Lowery, business manager. “It gives us the opportunity to come together for one common purpose. We can all come together as one.”

There’s also a matter of pride, and the 59 wind and percussion players practice every day, under the leadership of the band director, Andrew Jimeson.

“These students are some of the best musicians I have ever had the privilege of working with and I relish each day that I get to spend with them,” Jimeson said. “This trip is an experience that these kids have earned and truly deserve.

“It is quite humbling to receive a call from one of the top military bands in our country, to hear them say that they have heard of the great things that are happening in the Davie High Band program and then be asked to apply for this experience.”

Not only are band members practicing daily, they have the task of raising the more than $32,000 needed for the trip. The band has already been to Florida, and many family budgets are tight, said Allison Staley,band captain. They’ve set up a GoFundMe page, and are considering other options prior to the end of February deadline to have the money.

“We’re really trying to repesent North Carolina well,” Lowery said. “It’s a great opportunity for us to get ourselves out there and compete on a national level.”

After receiving instruction from the principal players of the Army Band, one of the eight bands will earn the President’s Cup as the best in the country.

“This truly is an exciting time for our band,” Jimeson said. “It is an honor of the highest regard and a once in a lifetime performance opportunity that could put the Davie band program on the map at the national level.

“This is an experience that will affect all of our band students and the future generations of the band,” he said.