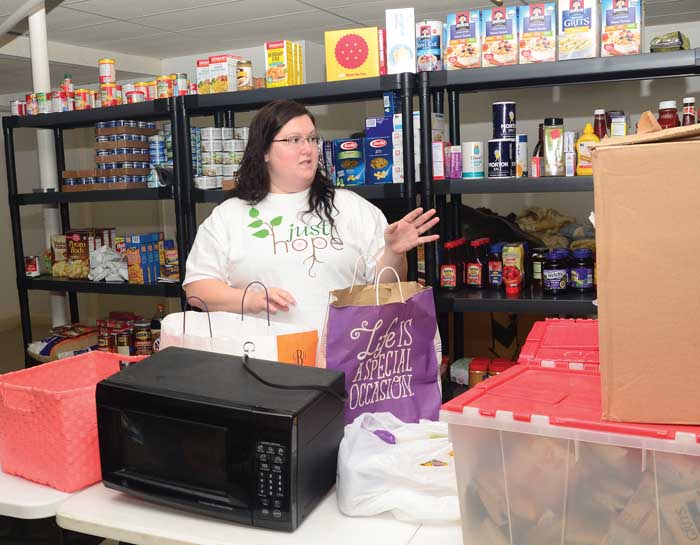 The year 2015 was a busy one for Krystal Dumas and Just Hope, the charity she created after hearing on social media about the basic needs of a friend.

Not only has Just Hope helped find shelter and food for dozens of homeless and struggling people in Davie County, it was named the best charity in a Davie Chamber of Commerce contest, it became a United Way agency, obtained tax-exempt status and is directed by a board of volunteers.

And now, there is the Just Hope Thrift Store, open in Mocksville off North Main Street at Church Street, in the basement of the NAPA building and facing Deano’s BBQ. It is open on Thursdays and Fridays from 9 a.m.-6 p.m., and Saturdays from 10 a.m.-3 p.m., selling items at discounted prices and accepting items to sell.

Dumas started out by herself – providing food and sanitary needs for a few families. Most of the food she purchased on her own, discounted through couponing.

The new thrift site has plenty of space, and houses the food brought in for the families the 25-30 volunteers serve almost daily. Items are also accepted there to sell in the store, with tax deductions available.

“After reading a Facebook post about some needing food, I had no idea the level of need in our county,” Dumas said. “It’s definitely taken off in the last couple of months.”

They are working on spaces for families to come and have a place to relax, maybe enjoy a meal, watch TV or play games, even wash their clothes.

It’s those families that keeps Dumas going, and she can talk about them for hours.

Most, she said, are just down-on-their-luck. Some have been injured or are sick and can’t work, and have waited for years for disability payments or given up on the tangled process. Most have no transportation. Some have jobs, but don’t make enough money to pay for rent, a vehicle and food.

Local hotels are filled with people who have nowhere else to live, she said. One room houses a family of nine. One of the adults work, but doesn’t make enough money to pay for permanent housing. “They make it work, for their kids.”

Just Hope serves 72 families that have no form of transportation. They’ve helped people who lived in the woods near WalMart find shelter in other counties. That bothers her some, because they are leaving the only support systems they know.

In a single week last month, five homeless people came by looking for a place to stay.

“People don’t realize the need. We need a shelter here. We need a place for single people. We don’t have a solution for people who need one bedroom and one bath and can afford a little, but nothing like what is available here,” Dumas said.

Most of the food Just Hope gives away is something that is simple and easy to prepare. Those living in hotel rooms may have a small refrigerator and a microwave (That is another major need, as are crock pots, tents, sleeping bags …). Peanut butter and jelly, crackers, pastries are the norm.

“A lot of them have kids, and most clients want to better themselves,” she said. Just Hope also guides people to available resources.

“Some just don’t want to come here, so I take the food to them. I love it when families try to give back in any way they can.”

Like the families Just Hope serves, the agency has bills, especially now the store is open. A generous board member negotiated the price for the site, and has guaranteed rent payments for a while. NAPA has been a great neighbor.

So it’s important for the store to make money.

No one is paid. Dumas and her husband, who is recovering from an early-age stroke, live simply with their two children, she said. “As long as our basic needs are taken care of, this is what I’m supposed to be doing. I’ve never had such satisfaction as this.”

Before her husband qualified for disability, she worked third shift, operated Just Hope and took care of her children and husband.

Just Hope doesn’t compete with other agencies, Dumas said. The goal is to help people who may fall through the cracks. Other agencies serve people in need Just Hope has no way of helping. “We’re filling a gap.”

Dumas doesn’t judge those she tries to help. She doesn’t preach. She doesn’t fear them, or pity them. “They’ll talk to me because they feel comfortable. Unless they talk to you, you can’t help.

“This has grown way better than I ever imagined,” Dumas said. “I’m determined to use every inch of space we have.”