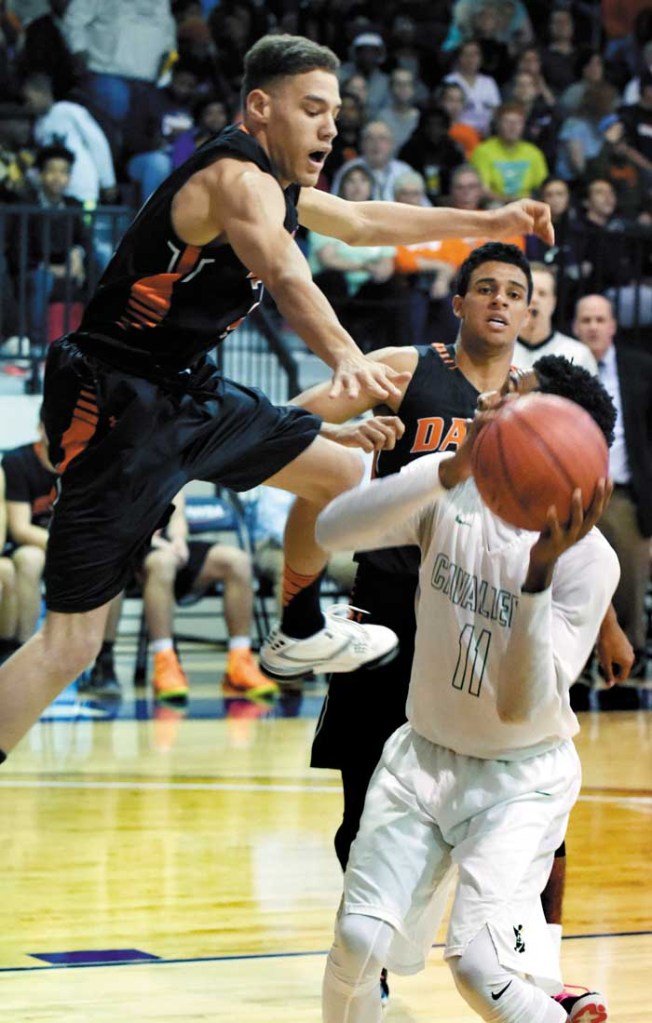 SALISBURY – The Davie varsity boys basketball team ran out of time after making a great comeback and lost 83-75 to North Rowan in the semifinals of the Sam Moir Christmas Classic at Catawba College on Dec. 29.

But the War Eagles were upbeat afterward. They got grease on their knuckles and put in a fine night’s work against a North team that went on to win its third Moir title in five years.

“You’re disappointed you lose, but we played a really, really good team today,” Davie coach Mike Absher said. “The fact that we came back and competed – and came back again in the fourth – yeah, we’ve got some tough kids. Seventy-five points against a defensive team like that is something we can build on. Offensively, I really don’t have any complaints. We’ve got to tweak some things on defense.”

The Cavaliers, a vaunted 2-A team, looked like it was ready to blow Davie off the floor in the early going. They bolted to a 17-4 lead, scoring 10 points on fastbreaks, and stretched the margin to 26-9 later in the first quarter.

“We had some breakdowns,” Absher said. “When easy baskets like that happen, we’re not keeping the floor balanced. We penetrate a lot. When we’re penetrating, we’ve got to make sure we’ve got guys rotating back. Because if we do miss or turn it over, the guy who is typically back may not be there. We have to be aware of that and rotate back on defense. Some of that was how much more athletic they were than us.”

When Davie’s Nic Starnes was fouled and then a technical foul was called on a Cavalier, he hit all four free throws to ignite an amazing 14-0 run that spanned the first and second quarters.

Davie played extraordinarily well from that point on. Gabe Gonnella’s pass to Michael Walton for a corner 3-pointer capped the 14-0 run and cut North’s lead to 26-23. When Cooper Wall hit a pair of free throws, the run was 18-2 and the deficit was 28-27.

“Davie is good,” North coach Andrew Mitchell said. “They’re tough, they move the ball and they take good shots. We’re fortunate that we’ve been playing 4-A teams like Davie. Davie made a good comeback, but it wasn’t unexpected.”

The Cavs pushed their halftime lead to 47-39 and they moved in front 67-51 by the end of the third. But Davie gave them headaches in the fourth.

Freshman Peyton Hampton scored inside to trigger a 19-9 run that included six points from Cory Heiner and five from Heath Slabach. When Slabach nailed a corner 3-pointer, it was 76-70 with 1:35 to go. Jordan McDaniel rebounded a Davie missed free throw and put it back up, offering hope for an upset win as he cut the deficit to 77-73 with 40 seconds left. Heiner rebounded his own miss and stuck it back in to make it 79-75 with 22 seconds to play. Heiner had eight of Davie’s 24 points in the fourth.

North, getting 32 points from Joseph Scott, would hit enough free throws down the stretch to hold off the War Eagles.

Despite the loss, Davie gave its fans plenty to cheer about in an electrifying atmosphere.

“It would have been nice if we would have gotten off to a better start,” Absher said. “Like I told them, that toughness will win us some more games down the road. (North) would do just fine in the (Central Piedmont Conference). They’re very athletic and very quick, but they are very skillful players, too, so they make shots. That’s what makes them hard to defend. I’m glad we played a high-quality team. You hate to lose, but it will make us better.”