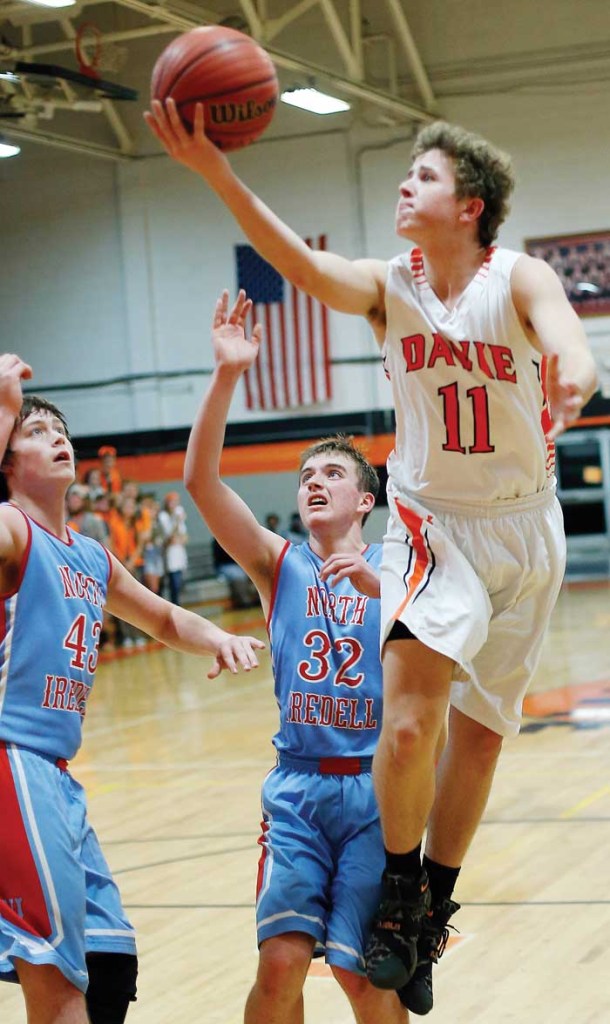 WINSTON-SALEM – Heath Slabach was dazzling from downtown as Davie’s varsity boys basketball team pulled away from Atkins, 88-73, in a road nonconference game on Dec. 21.

Slabach scored 30 points and hit seven 3-pointers. He was spectacular in the first half, scoring 24 and hitting six triples.

“You knew he had it in him,” coach Mike Absher said. “That was quite a performance.”

Slabach has taken a leap forward after averaging 4.7 and 5.4 points in his first two varsity seasons. The junior raised his average from 10.3 to second on the team at 12.3 in two hours at Atkins. His previous Davie high was 21 in last year’s 86-47 home rout of Parkland.

Defense was absent in the first half, from both teams. Atkins led 21-19 after the first quarter and Davie led 47-44 at intermission. The War Eagles trailed 28-20 before ripping off a 27-16 run in the final six minutes of the half. The run was ignited by 3-pointers from Cooper Wall and Slabach. They never trailed again after Nic Starnes passed to Jordan McDaniel for an eight-footer that made it 40-39.

“We had a good enough scouting report to know there were two guys (from Atkins) that can shoot really well,” Absher said. “We were just a little late at times and giving them just enough space.”

While Atkins never restrained Davie’s offense, the War Eagles clamped down on defense in the second half and won going away. Slabach spotted up in transition and buried his seventh 3 to give Davie a 52-46 lead. Perhaps he got a little tired of burning the Camels from deep, so Slabach drove inside and got an and-one to make it 60-49.

“He played with a ton of confidence,” Absher said. “Our guys did a good job of finding him, too. We were struggling early on defense, but once he started making some shots, our energy level picked up. Even (the next day) in practice, it continued. He’s a year older and stronger and that’s made a big difference.”

Davie switched defenses in the second half, slowing Atkins with a 1-3-1 zone.

“And we trapped in the corners on different occasions,” Absher said. “We did a good job of being there on the catch. We wanted to make them drive it.”

Davie broke it open against an opponent it was supposed to handle. The Camels dropped to 1-9. The War Eagles put up the most points in 63 games. When they hammered North Davidson 93-54 in 2012-13, they were led by Cody Martin’s 26 points, Caleb Martin’s 22, Austin Hatfield’s 20 and Taylor Hatfield’s 12.

L.P. Mua, the 6-4, 205-pound senior, missed the first of four games while visiting family out of the country. The center is averaging 7.4 points.