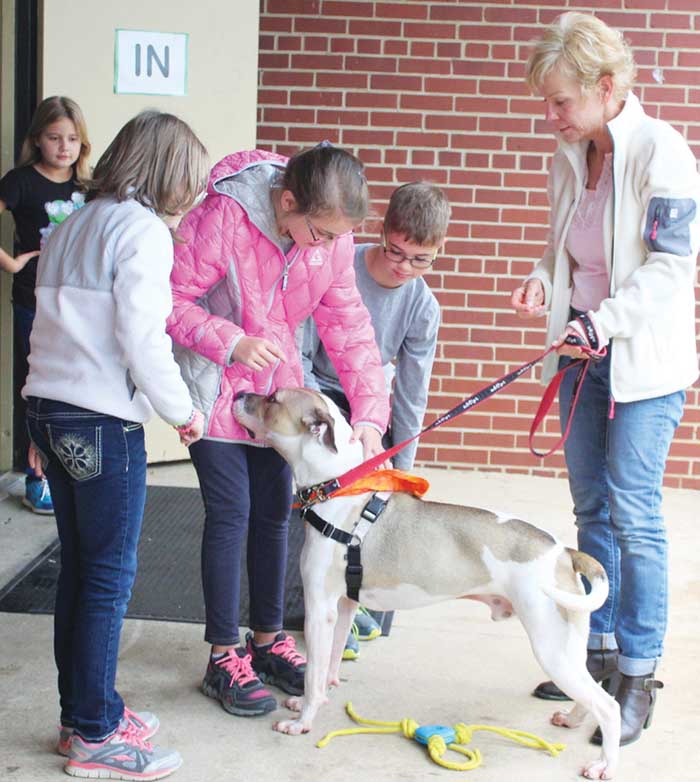 Sebastian greets Shady Grove students, a reward for raising money for the Humane Society of Davie.

The sounds of laughter filled Shady Grove Elementary last Tuesday as the fourth grade class got to cuddle and hug Sebastian the dog.

Sebastian’s visit was the reward for the grade that raised the most money in the Pennies for Paws fundraiser.

“I got my dog there,” fourth grader Tatum said when asked why he helped raised money for Pennies for Paws.

In partnership with the PTO, Shady Grove Elementary raised almost $2,000 for the Humane Society of Davie County (HSDC).

Krissi Shook, a school volunteer and fundraiser manager, said “We chose the Humane Society because we know most kids love animals. This was a great opportunity to get the kids excited about giving. By having them donate loose change, they are able to see that every little bit helps and that their small gift can go a long way.”

The fundraiser was set up as a mini-competition and the winning grade received extra recess, popsicles, and a meet and greet with Sebastian.

Gabby, a fourth grader, said she wanted to help because “I wanted to give money to help dogs while they are waiting to be adopted.”

Sebastian showed the fourth grade class some tricks he learned from the Petsense Dog Training Program. After his demonstration, the kids were able to meet him one on one.

Fourth grader William said he raised money so HSDC “could get enough to expand and help more.”

Shook said: “I was totally amazed by the amount of money these kids brought in, but what was even more amazing was the number of kids that stated it doesn’t matter who wins the contest, but what really matters is they are helping the cats and dogs.”