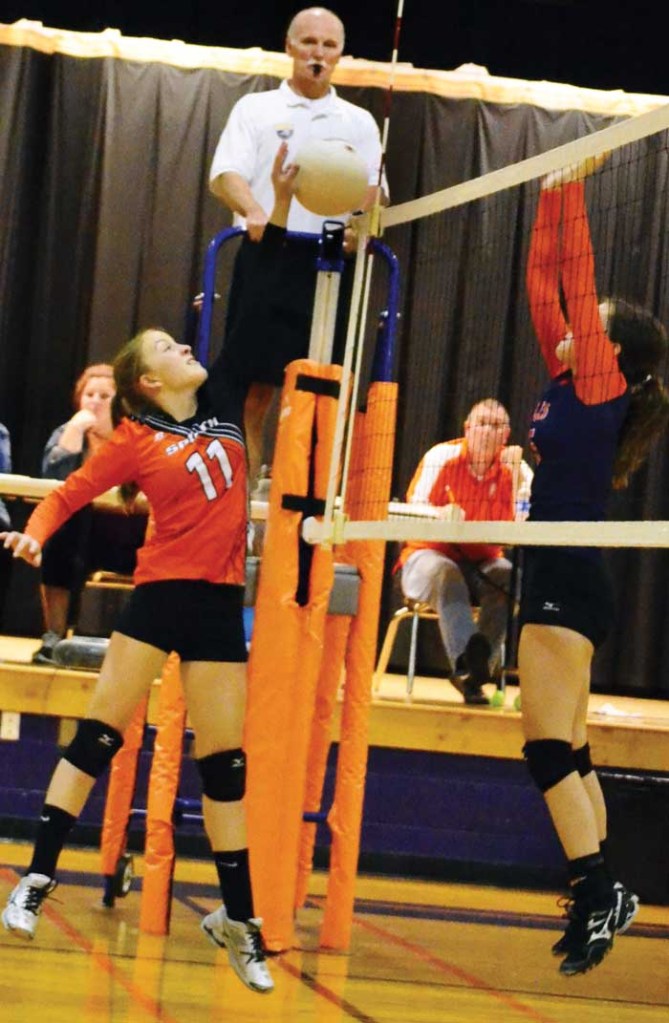 Millie Baysinger tries to tap it over.

In the first set, the Jaguars used their serving arms as their primary weapon. The team was 24 for 24 from the serving line with 11 aces. Abby Sloane led the way, going 9 for 9 with five aces, while Zoe Clark (5 for 5, two aces), Dakota Hutchins (4 for 4, three aces) and Salem Stewart (1 for 1, ace) adding to the assault. Clark led the offense with three kills to go along with Anna Ortiz’s two kills and Hutchins’ one kill .

“Our girls are really good about not giving the other team any ‘free points,’” Ellis coach Beth Hall-Love said. “They make them work for their points by getting all or the vast majority of their serves in.”

The deciding set was more of the same as the Jaguars went 21 out of 23 from the line. Jessie Crosby led the charge, going 10 of 11 with a team-high five aces. Stewart (2 for 2) added another ace.

“I hate to sound like a broken record, but when we are on with our serves, it puts more pressure on the other team to execute their offense,” Hall-Love said. “Many of our girls are not only able to get their serves in, but they are able to pick out the weak spot or holes in the other team’s defense and exploit it.”

The Ellis offense is not too shabby either. Kayla Moore had a team-high three kills, followed by Clark’s two kills, while Hutchins, Ortiz and Sloane added one kill.

“Our back row, no matter who we have back there, has done a really good job of setting up our offense by giving our setters good passes to handle,” Hall-Love said. “(Seventh grader) McKenzie Stakely had her best day yet on the back row.”

Behind the efforts of Elizabeth Tilley (4 for 6, four aces), Sarah Bracken (4 for 5, two aces, kill), Angela Zamora (two kills) and Bella Kite (6 for 7, four aces), the first set seemed to be well in hand with Ellis leading 21-11. South began to make a furious comeback, which culminated with  the Tigers taking a 23-22 lead.

“South had one server that was able to hit them short and really got in the girls’ heads and they couldn’t seem to shake her,” Ellis coach Samantha Wallace said.

After an Ellis timeout, the ensuing South serve went wide to tie the score at 23. Ellis’ Bella Kite nailed the serve but the Tigers were able to make the play and  attempted to fool the Ellis defense by sending the ball back over the net on their second hit. It almost worked. But just as it appeared the ball was going to hit the floor in the middle of the Ellis defense, Carmen Tomlin came flying in from the back row to make a dig worthy of a SportsCenter “Top Play Nominee.” Ellis eventually took the point when a South hit fell just wide of the sideline. Ellis took the set 25-23 after South was unable to get Kite’s next serve back over the net in three hits.

“Some of our girls were in new positions they had been practicing,” Wallace said. “I was proud of the team. They were able to pull it together, make some good plays and pull out a win.”

The second and deciding set was far less dramatic. Ellis jumped out to an 11-4 lead behind the serving of Tomlin (4 for 5, three aces), Emerson Justice (4 for 4, two aces) and Tilley (ace).

After trading points back and forth, Ellis regained the serve leading 14-6. Presley Jones then continued her good work from the serving stripe by going 6 for 6 with three aces to extend the lead to 19-7. From there, the Jaguars cruised to take the set and match at 25-13, thus improving their record to 5-0.

“Between sets, the girls were able to shake off their nerves and really pulled together as a team,” Wallace said. “They pulled out a win and you could tell by the end of the second set they were really playing well together, getting their serves over and putting up a better defense.”