Clemo steps up for JV volleyball 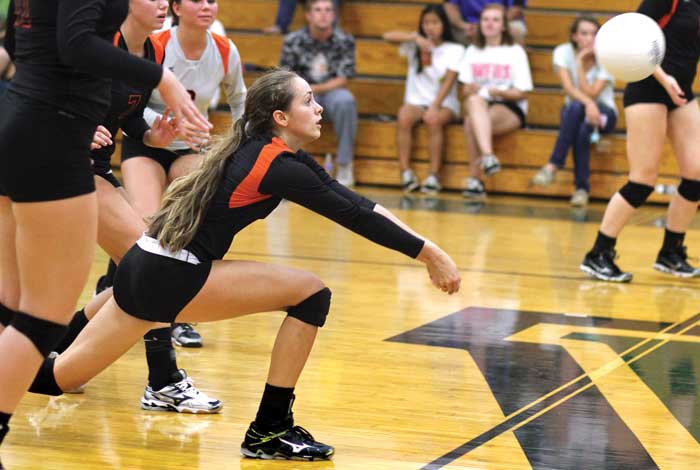 With setter Claire Wallace out with an injury against host West Forsyth on Sept. 29, Davie junior varsity volleyball coach Carly Pratapas had reason for concern.

Thanks to Kim Clemo, Davie overcame the adversity and kept its perfect record intact. The War Eagles prevailed in two close sets.

“We had to play hard,” Pratapas said. “We played well.”

Clemo did wonderfully as Wallace’s replacement at setter. Oh yeah, and she did it while running a 5-1 offense for the first time.

“My setter is hurt, so we had to use a new rotation,” Pratapas said. “But everyone stepped up, especially Clemo. She set the whole (match) and really pulled the team together. She normally sets with Claire and plays middle. But this is the first year she’s ever done any setting. She’s really a hitter, but I had to develop another setter and she was the most versatile.”

Two days later, a home match against North Davidson was no different. The War Eagles rolled in two sets. They are 13-0 overall and 9-0 in the Central Piedmont Conference, and they’ve claimed five matches in a row in straight sets.

“We played awesome,” Pratapas said. “I’m so proud of all the girls. We played hard the entire match. We had great passing, setting and hitting.”

It was much tougher than the first meeting, but Davie’s varsity pulled out a 3-2 decision at West Forsyth. The next match, at home against North Davidson, was smooth sailing as Davie won in straight sets.

Davie is 12-5 and 6-3 in the CPC. No more information was available on the varsity.