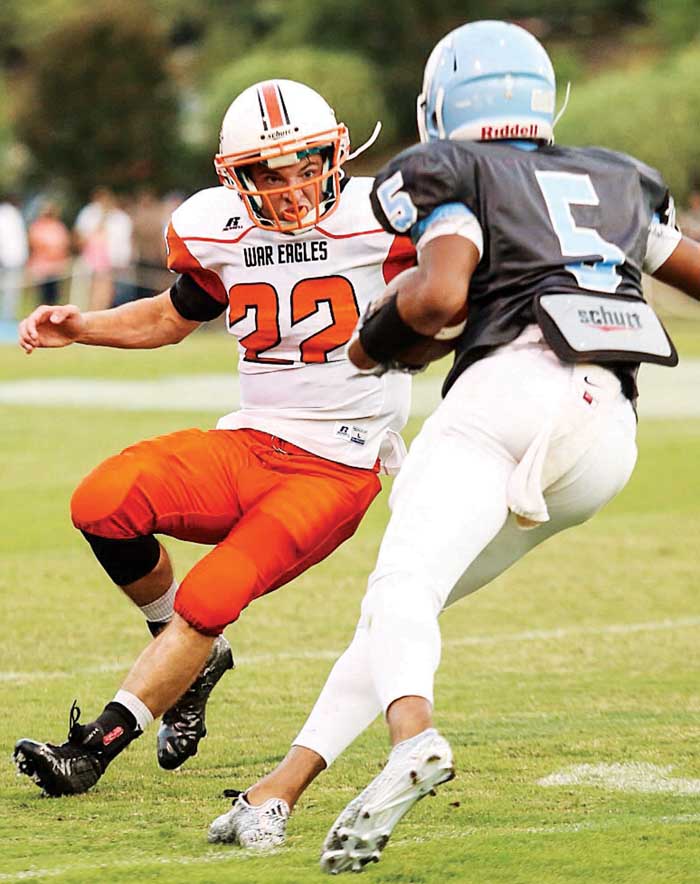 But Davie’s 14-0 lead wound up being a tease. The War Eagles fell apart and lost 35-14 in a game that was much closer than the score. The chance to pull a big upset slipped through their grasp as West tied the game with 4:30 left in the third quarter, then ran away with three touchdowns in the final 7:56.

The Falcons, who lost 28-26 to Mooresville in week one, evened their record. Davie stumbled to 0-2.

The game turned when West scored a special-teams touchdown against Davie for the fifth straight year. With 45 seconds remaining in the first half, Davie had a pep in its step with the 14-0 lead.  Quarterback Chris Reynolds was slicing West apart, completing 11 of 13 first-half passes for 110 yards and connecting with four targets. Ben Ellis, Cooper Wall, Spencer Wilson and Curtis Gray all had at least two receptions in the opening half. On top of that, the Davie defense, led by James Boyle and Jack Little, was cooking with gas. West quarterback Kacey Otto suffered five straight incompletions, and its running game was drilling dry holes.

Davie had all the momentum – until the game-turning kickoff return. After Reynolds threw a TD to Ellis, Kortez Weeks took the ensuing kickoff 95 yards, and it was 14-7 with 30 seconds on the clock.

“Everything is going good,” Davie coach Devore Holman said. “The offense is moving the ball. The defense is getting after their rear ends. Then all of a sudden, we kick off before the half, they get momentum going into the half and it just kept on.”

Specials teams came back to haunt Davie once more. The last time Davie scored on special teams was Devon Parks’ 80-yard punt return in a 46-6 rout of Reynolds in 2012. Since that time, Davie has allowed seven special-teams TDs, including three in the first two games of 2015.

“Yeah, that was a big play for us to get on the scoreboard when we weren’t playing too good,” said Joe Nixon, who notched his first win as West’s new coach. He was an assistant during West’s run to three straight 3A titles. “For the kids to face some adversity and battle back, I’m really happy with our team.”

On the Falcons’ first possession, they converted three third downs before Otto was sacked to bring on the punting unit. Spencer Wilson got to Otto first, then Boyle and Jalen Redmond finished him off.

Boyle played a whale of a game. On the first play of West’s second possession, he dropped running back Jovon Quarles the instant he got the ball. Seven plays later, a pass deflected off the hands of a sliding Weeks, and Boyle intercepted and returned it 21 yards to the Davie 35.

Little demonstrated excellence at outside linebacker. On one play, he saw that he couldn’t get to Quarles, so he pushed a blocker into Quarles and the ball carrier went down at the line of scrimmage.

Funny things happen in this rivalry, and Davie drove 58 yards to grab a 7-0 lead. On third-and-5, Reynolds rolled left to elude pressure. He’s terrific at rolling out. If you walk to the concession stand when a play begins, he is still scrambling and looking when you return to your seat. Wall tightroped the sideline and squeezed a seven-yard reception on the third-and-5 play. Next came back-to-back swing passes to running back Gray, and Davie was in business. Then Reynolds broke off 23 yards to the West 1 on a keeper. Reynolds faked a handoff to Gray and scored.

“We came out with a lot of intensity,” Holman said.

“(Reynolds) is a super quarterback,” Nixon said. “He does a great job finding a lot of time and keeping his eyes downfield. You’ve really got to cover those guys the whole time.”

Cody Hendrix tackled Quarles for a loss. Six plays later, safety Caleb Wallace made the greatest interception that wasn’t. Defending Weeks on a deep route, Wallace tipped the ball into the air, left his feet and snatched it as he hit the ground. The back judge, however, came rushing in to signal no catch.

At least West would not cash in. Boyle blew up Quarles for a five-yard loss. West went for it on fourth-and-3 at the Davie 41, but defensive tackle Jarrell Farmer knocked down the pass.

Then Davie’s offense found the end zone in eight plays. Reynolds found Wall for 20 yards on a skinny post. Moments later, Wall ran the same pattern and drew a pass interference penalty. On second-and-goal from the 15, Ellis hauled in a 15-yard TD on a crossing route to the right side of the end zone.

It was 14-0 with 45 seconds left in the half, and here the orange-clad fans were thinking, “Hmmm.”

“We knew Page (which blasted Davie 53-22) was really good, we knew Davie had some skill players on offense and we would be tested,” Nixon said.

The game’s complexion was changed 15 seconds later, when Weeks went 95 yards on the kickoff return.

The second half started well as Quarles was knocked back five yards by – you guessed it – Boyle. West punted, then Davie punted. From there, Davie morphed into a dumpster fire.

West went 61 yards in 11 plays to tie the game, even though Boyle forced third-and-5 by dropping Quarles for a four-yard loss. Otto converted a fourth-and-1 with a four-yard run from a hammer formation. Quarles covered the final 18 yards on back-to-back runs, and it was 14-14 with 4:30 left in the third quarter.

Ellis returned the ensuing kickoff 48 yards into West territory, but a 20-yard holding penalty bogged down the drive.

The Falcons owned field position throughout the second half, and they only needed to move 39 yards to take the lead. Wallace and Angel Perez forced an incompletion on a long pass to the end zone, a flag for holding pushed West back and Mitchell McGee nearly intercepted a pass on third down.

It was fourth-and-19 from the 22 when West devastated Davie. Instead of going to the air, Otto handed to Quarles, who went over right tackle and broke a 22-yard run in which he was barely touched. Davie blocked the point-after try, but Davie was staggering.

Before that fateful play, Quarles had managed 30 yards on 19 carries.

“I figured they were going to sit back and drop in coverage,” Nixon said. “We like what we have with the counter, and Quarles made a heck of a run. We know Quarles is a special running back. We told him to be patient, keep pounding it in there and we felt good about him getting loose eventually.”

On fourth-and-2 from the Davie 33, Reynolds pulled the ball down and took off toward the sideline. He didn’t come close to the marker. Now West was set to put the dagger in Davie. Otto found Weeks on a slant for eight yards on third-and-7. When Boyle forced a five-yard loss on an Otto run, it was fourth-and-8 from the 19. A stop and Davie is still alive.

But another fourth-down breakdown spelled doom. Otto found Weeks in the left side of the end zone, making West 3-for-4 on fourth-down tries. Otto’s two-point pass made it 28-14 with 2:52 remaining.

“It was a slant-and-go,” Nixon said. “We had been hurting them on slants. We saw they were wanting to jump inside, so we went with the slant-and-go.”

“We broke down in coverage,” Holman said. “We had the perfect call for that situation and we didn’t execute.”

For good measure, West tacked on a TD with 46 seconds remaining.

After the red-hot first half, Reynolds went four of 13 for 38 yards in the second half, with all 38 coming on the game’s final play. Davie couldn’t run at all, averaging a meager two yards per carry.

Otto played a monstrous part for West, throwing for 189 yards and rushing for 44, including 10-for-13 passing in the second half. Weeks (101 yards on nine catches) and Juwan Houston (83 yards on seven catches) were lethal receivers.

“We tried to get it going (in the second half), and they weren’t having any part of it,” Holman said. “We couldn’t run it inside. Our quarterback didn’t have time to throw. We couldn’t get off the field on defense, and there you have it.”

“It was a phenomenal effort,” defensive coordinator Tim Devericks said of Boyle.

“A lot of those guys gave it everything they had, and that’s all I can ask of them,” Holman said. “We’ve just got to work on the part of executing and finishing things off.”