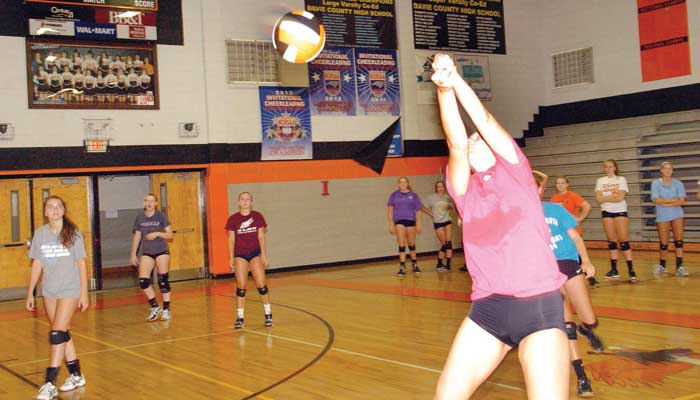 Experience should play a big role in varsity volleyball at Davie High.

Davie’s varsity volleyball team is hoping this is The Year. There’s no reason why big things shouldn’t be expected when you’ve got a team loaded with seniors who have vast experience on the varsity level.

The War Eagles certainly have something to prove under new coach Amber Brandon, who coached the junior varsity for one year before succeeding Becky Miller.

They finished fourth the past three years in the Central Piedmont Conference, going 33-37 overall and 16-18 in the CPC from 2012-14. They lost in the first round of the ‘13 playoffs, and they failed to qualify for the ‘14 postseason.

The last time they finished as high as second in the league was 2008. Their last championship came in 2002, when Davie claimed first in the regular season under coach Dave Markland.

“We have some experience, that’s for sure,” Brandon said. “These girls have always felt like they have a lot of talent. Individually, they’re pretty talented. But it’s just never clicked as a team. I think it’s more excitement than pressure. It’s about getting it to all come together.”

One of the setters is Nicole Valliere.

“She set for me last year on JV,” Brandon said. “On the first day of practice last year, I pretty much put the ball on her court and she ran the show.”

The other setter is freshman Lauren Grooms. That she’s setting on varsity as a freshman … what more do you need to know?

“She’s a talented kid,” Brandon said. “She does all the hard things correctly, so we’re working on those little minor techniques and pushing her to get ready to play at the pace of varsity games. Skill-wise she’s there. She’s just learning to play at the pace these girls are used to playing at. She’s got long arms and long legs. She’s versatile. She can be a front-row setter, and I haven’t seen a solid front-row setter in our area in a while.”

While Taylor Walton and Emily Ruble will likely be the main outside hitters, Brandon believes Davie will be balanced when it comes to kills.

“More than having that one dominant hitter, we’re more spread out,” she said. “There’s not one person who will probably dominate in hitting like some of the teams in our conference that have one power hitter. I’d like to think we’re stronger in every spot. For us to have a good season and play to our strengths, that’s the style of volleyball we’re going to have to play.”

The coach is excited about her weapons on the front row, Morgan Sessoms and Summer Bivins.

“It’s a blessing for me to have two middle blockers that not only are strong blockers, but they’ve been there and they’ve worked with the other hitters, and they also provide an offensive weapon in the middle,” she said.

“I knew going in that we were going to have three seasoned defensive specialists,” she said. “Most coaches carry two, but we have three. I went into tryouts thinking we may carry two, but all three have been so even and so consistent that defense and passing should be one of our stronger traits.”

“Reagan and Tabor will be really strong,” Brandon said. “Tabor has a kid, Gracie Tedder, who is probably one of the better players in the last 10 or so years in our conference. She’s a really smart kid. She’s got a nose for the ball; she picks up everything. She’s small but she’s an explosive hitter. We’ve got Tabor on her Senior Night, so that’s definitely something we’ll have to go in with a plan for.”

Indeed, Tedder is thoroughbred, making the All-CPC team the past two years. Tabor coach Robyn Wesselman told the Winston-Salem Journal: “There’s no doubt in my mind that she’s one of the strongest players in the state.”

Reagan, the defending champ, has a host of returners.

“Last year they had a young setter that developed really well, and they had some young hitters,” Brandon said. “We know Tabor and Reagan are both going to be pretty strong.”

And then there’s West Forsyth. The Titans may have graduated a ton of seniors, but “that’s a coach (Lauren Yacobi) that has turned that program around,” Brandon said. “So I don’t ever envision them being weak.”

With so many veterans, there’s a sense of urgency with the War Eagles.

“Skill-wise we’re pretty even across the board,” Brandon said. “What we’re really trying to look at now is who plays well together? Who understands each other? Skill-wise we’re there. We’re just trying to see who’s going to come together and develop as a team.”

Notes: Miller was Davie’s coach for 10 years. … Brandon is the 14th coach in the 39-year history of the program.