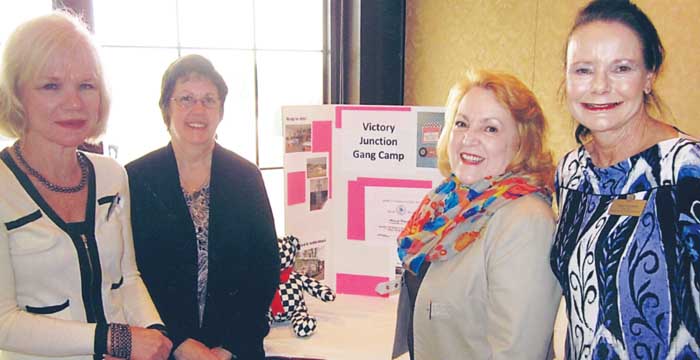 It is, but it is no ordinary camp. It is the Victory Junction Gang – a camp for children with chronic medical conditions or serious illnesses.

Wendy Carricker, past president of the Greater Federation of Woman’s Clubs in North Carolina, has been a volunteer for two weeks each summer since 2005 at Victory Junction. She brought the camp story to the Mocksville Woman’s Club at the March meeting. The camp in Randleman encompasses 84 acres and is in memory of Adam Petty, the grandson of Richard and Lynda Petty.

Each summer, for one week, 128 campers have the experience of camping in a safe and medically-sound environment. Thirty hospitals partner with Victory Junction to provide health care for campers, who are referred by doctors. The $2,500 cost for each child is covered by donations.

Carricker described the camp and told of experiences as a volunteer. Each child receives a blanket and a NASCAR bear when they arive. In the 16 cabins (identified with race cars), there are eight campers age 6-16.

A highlight is a weekly talent show in which all campers participate, choosing costumes, writing scripts and being on the stage – always a recipe for fun and excitement.

“I always volunteer in one of the younger boys cabins, and am constantly amazed at what they discuss and share,” Carricker said.