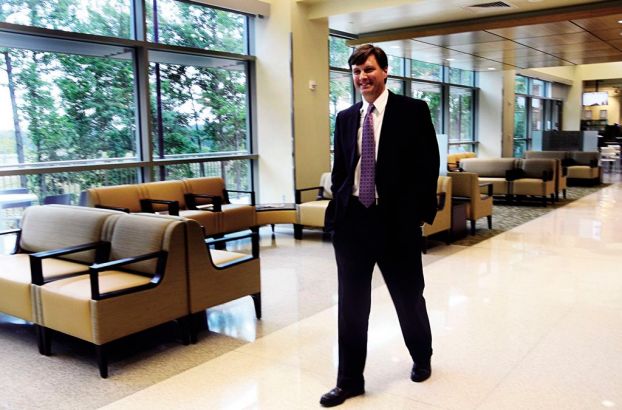 BERMUDA RUN – Chad Brown was a student at the University of Tennessee when he began volunteering at a hospital in Knoxville.

It changed his life – and his career path.

Brown came on board as the director of Davie Medical Center here in early June, a career move that has seen him work at mostly smaller hospitals in several states.

He jumped at the opportunity to work for Wake Forest Baptist Health.

“From the outside looking in, the reputation of the Baptist system is internationally known for great clinical care,” he said. “The commitment and the vision is here. The commitment to the patient and family is unlike anything I’ve ever seen.”

The business changes rapidly, but one thing never changes at Baptist, he said. The patient always comes first.

“It’s about bringing world-class health care to the community – to Davie County – bringing it to the people.”

He likes the design of the new facility, and has been impressed by the employees.

“It was designed with the patient in mind … with a lot of community input. We’ve involved the staff and providers. We have an advisory team that includes community members – to get feedback from folks who use the hospital.”

Thirteen days in, and Brown has already received positive comments from a patient. “It’s refreshing to see that. The reception from the community has been outstanding.”

Brown thought he wanted to be a veterinarian before that volunteer stint in Knoxville. “I was fascinated by the hospital setting and how they take care of people, and I wanted to be a part of that.”

Brown earned a bachelor’s degree in biology from UT, and a master’s degree in business and health administration from the University of Houston. He plans to move to Davie County with his wife and three children when his house in Roxboro is sold.

In his spare time, Brown enjoys time with family – especially hiking, fishing and other outdoor activities.

Just don’t ask him to many events on Saturdays in he fall. That’s football season. And like many UT graduates, he’s a Volunteer through and through, and very well could be Knoxville bound.

Gordon and Gail Stewart have visited every state in this country – their country. They’ve lived in quite a few... read more